Last week we discussed God being on Jacob (“And God went up from on him…”) and wondered if that meant Jacob experienced God’s presence more than others (the shekhinah, the immanence of God). We thought about the Chassidic idea—from Chassidim in Ukraine–that when bad things happen to a person or when a person is bad it can push them to a higher level of spirituality or connection to God–and maybe that was true for Jacob and is why we are named after him. We thought another reason for our being named after Jacob—really, after Israel—is that his name has in it the name of God (El).

We discussed Rachel giving birth and having a difficult labor and the idea that much of her life is consumed with the issue of having (or not having) children. We also reviewed the life of Rachel and our other reactions to her, including that she and Leah collaborated in the deal regarding the mandrake (thus avoiding turning against one another as marginalized or oppressed people often do). We discussed the midwife telling Rachel not to fear because the child would be a son for her and wondered why that made things less fearful (maybe it doesn’t; maybe it just means ‘be brave’; maybe the fear referred to is the fear that she would not have a son, especially if she thought she might be dying and would not have another chance to have one; maybe, if she was having a difficult labor, the last thing she was thinking about was the sex of the child). We discussed her calling the son ‘Ben-oni’ and Jacob calling him ‘Ben-yamin’ and a common explanation as ’son of mourning’ and ’son of strength’ (‘son of my days’ implying ‘son of my later days’ thus implying strength) but noted that the derivation is not clear since ‘Ben-oni’ also could mean ’son of strength’. We noted that Jacob also had two names. We noted Jacob once again setting up a pillar—though this time on Rachel’s grave. We noted that the text has a retrospective quality, for example, when it refers to the pillar as “the pillar of Rachel’s grave to this day.”

We discussed the next awful story, namely, of Reuben having sex with Bilhah, Israel’s concubine, and Israel hearing about it. We saw it as a power move or not a very smart move and wondered if the awful stories we are reading make it more difficult to get through the difficult times we are living in and talked about whether it is possible to use difficult times to propel ourselves to higher spirituality or inwardness, or whether that is bunk, and all agreed that, either way, being together is a good way to get through hard times, such as our being together every week in Torah Study.

We discussed Isaac dying at Mamre at Kiriath Arba (which, the text says, is Hebron, showing again the text’s retrospective quality) and remembered the terebinth of Mamre (where Abram saw the three strangers), that he was very old when he died (a hundred eighty years) and that Jacob and Esau came back together and buried him.

Our artwork this week is by Israeli Jewish artist, Moshe Castel (1909 ), And Jacob Set Up a Pillar (above), and Land of Canaan (below). Castel was born in Jerusalem in Ottoman Palestine. His family were Sephardic Jews from Spain. He was part of the New Horizons group that created an Israeli modernism in art. It was influenced by French modernism in painting and by the land of Israel itself. Castel used ground basalt as an underlying material that he engraved in his paintings. The process was inspired by the engraved basalt blocks of an old synagogue in Galilee. He had an apartment in Montparnasse, Paris, and worked there a couple of months every year. 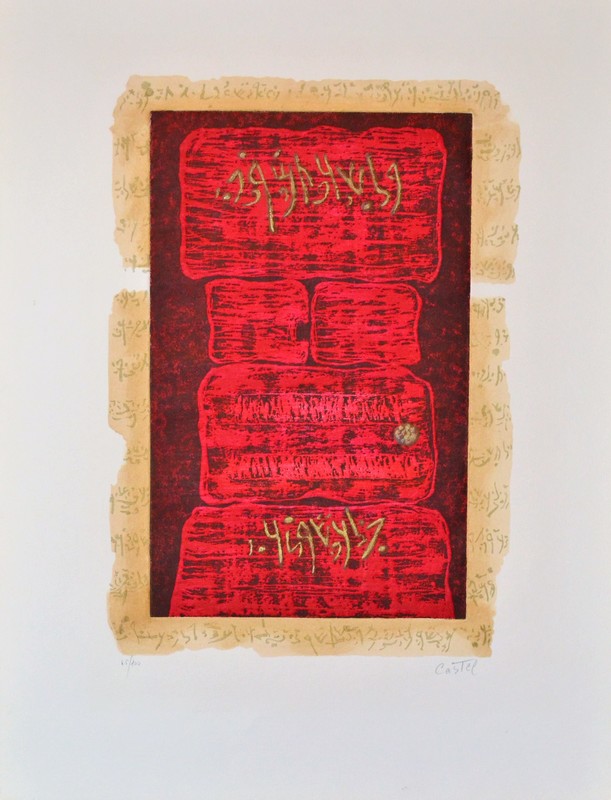 And Jacob Set Up a Pillar (Moshe Castel) 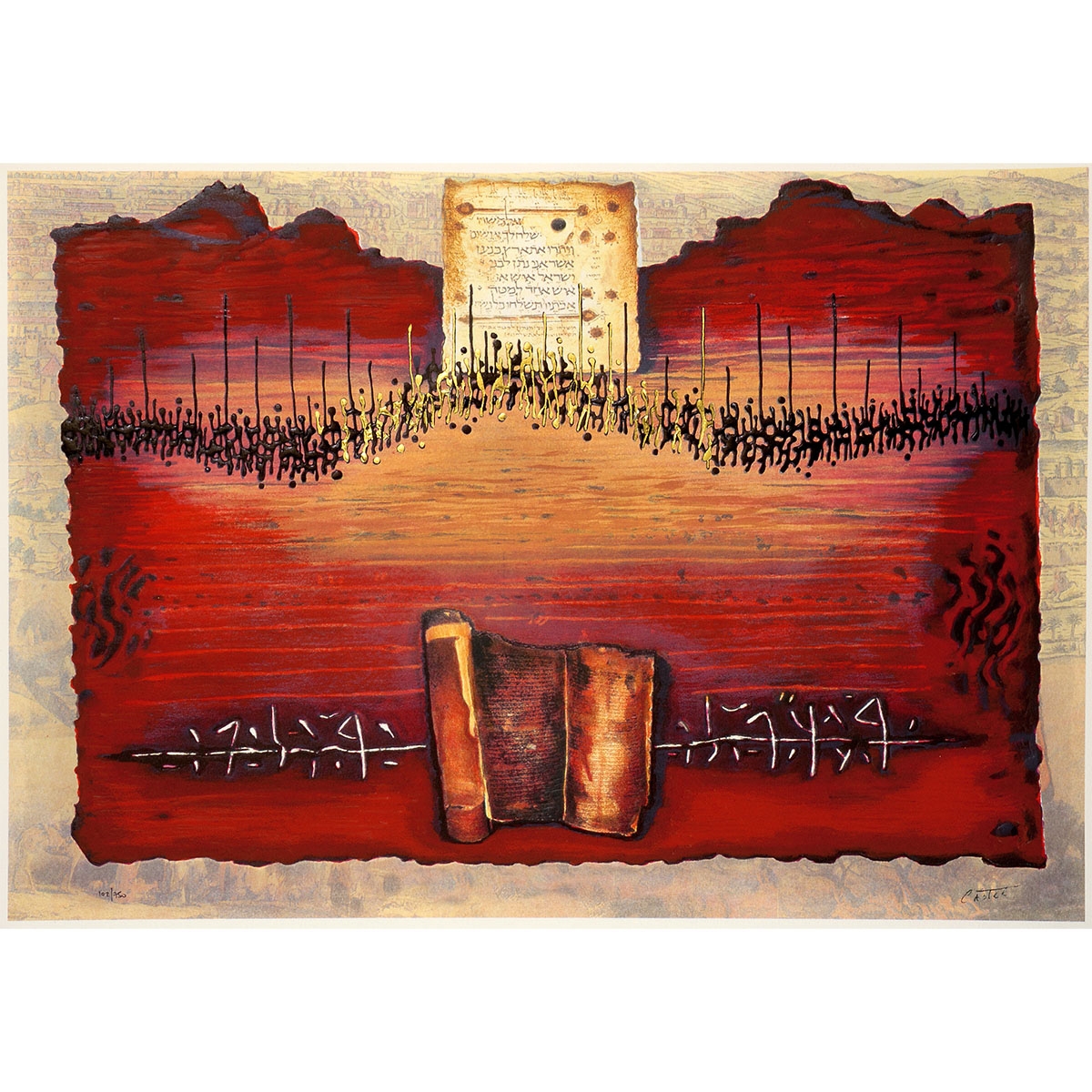