Last week we discussed Jacob saying that El Shaddai appeared to him in Luz in Canaan, blessed him, and said he would make him fruitful, multiply him and make him into a community of peoples. We compared the passage to Isaac’s similar blessing of Jacob in Genesis 28:3 and to the related blessing of Jacob when his name was changed to Israel in Genesis 35:11 (El Shaddai is mentioned in each).

We then discussed at some length the significance of Jacob declaring Joseph’s two sons, who were born in Egypt before Jacob came there, his own (Ephraim and Manasseh) and stating that they would be like Reuben and Simeon to him (though the offspring he had after that would be Joseph’s own): we thought the latter remark meant they would be equal to the top two (the first and second born) and that the first meant that each of them would be one of the twelve tribes; and that this meant not that Joseph was getting less by not having a tribe of his own but that he was becoming two tribes instead of just one.

We discussed Jacob mentioning that Rachel died beside him in Canaan when he was going to Ephrat (that is, Bethlehem) and tended to prefer the translation that does not say “because” (that is, does not say it was because of the circumstances of Rachel’s death that Jacob made Ephraim and Manasseh his own. Instead, we thought, given his weakness and possible lack of clear focus (he was lying in bed and had to summon up force to sit up) he might just be associating Rachel’s death near Ephrat with Ephraim’s name.

We noted that when Jacob saw Joseph’s two sons, he had to ask who they were. We discussed that he might not even know them, living away from Joseph in Goshen and that they might not even be Hebrew speakers. We discussed the poignant scene of Jacob’s eyes being heavy and him being unable to see Ephraim and Manasseh, but bringing them close, kissing them and embracing them and stating to Joseph that he had not expected to see Joseph’s face again and, behold, God had shown him Joseph’s seed as well. Finally, we noted Jacob once again showing his trickster nature by blessing the younger, Ephraim, before the firstborn, Manasseh (recalling him pretending to be Esau in order to trick Isaac into giving him Esau’s blessing). Though Joseph set it up so that Jacob would bless Manasseh first, Jacob crossed his hands and reversed the order; though weak and blind, Jacob had not lost his shrewdness.

This week’s artwork is more sculpture by New York Hasidic artist, Zalmen Glauber, Joseph of the Twelve Tribes (bronze, above), and Throne of Joseph (gypsum, below). Each is part of Glauber’s 12 Tribes Project. The Throne features Egyptian hieroglyphics and depicts the dreams of the cupbearer and the baker. “As a practicing Hasid,” Glauber says, “I am under obligation to leave the work unfinished. I never know in advance what will be left undone. Any forethought in this respect would make the omitted element deliberate and thus essential to the completion of the design, thereby undermining the purpose of the rabbinical provision.” 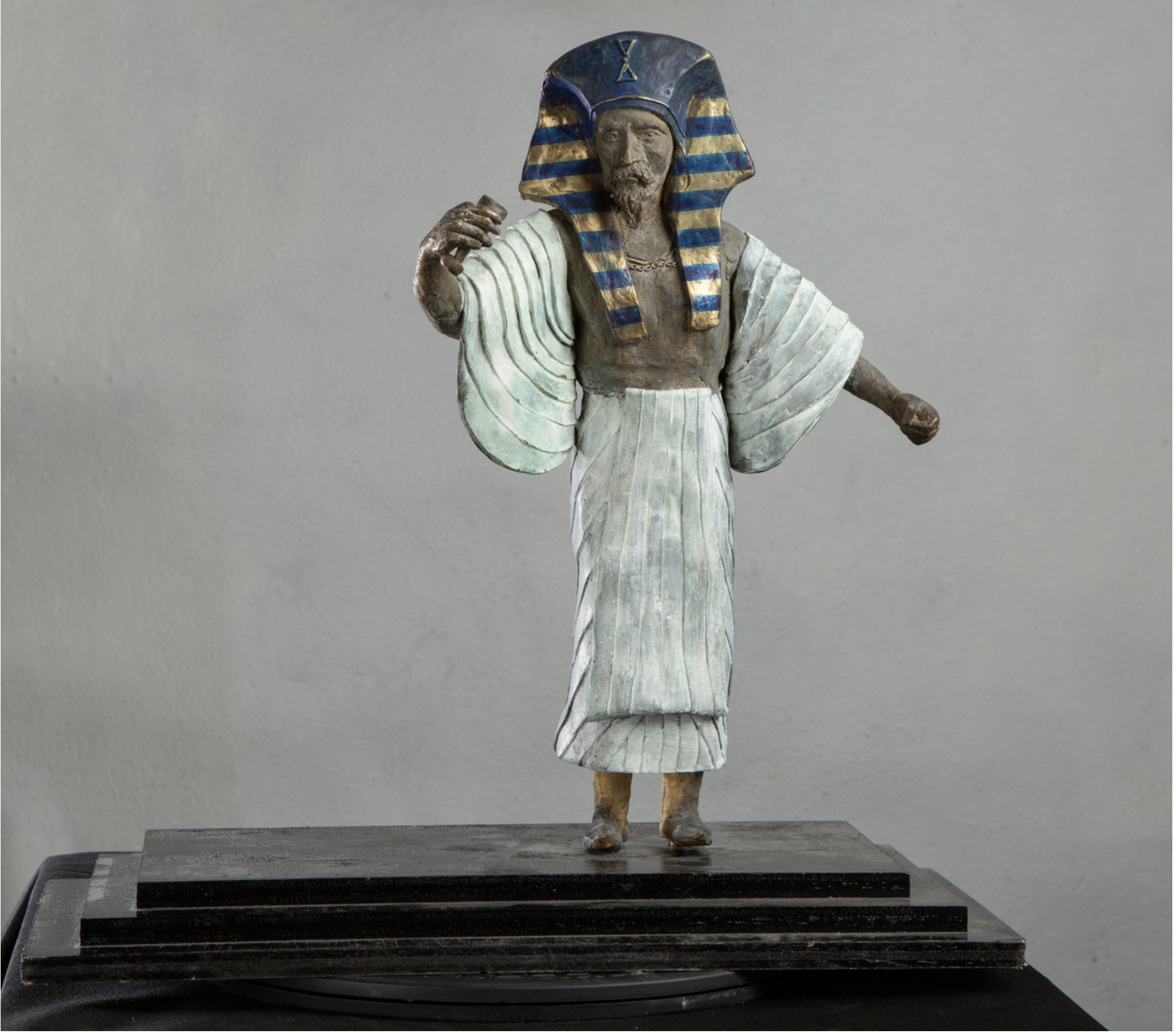 Joseph of the 12 Tribes (Zalmen Glauber) 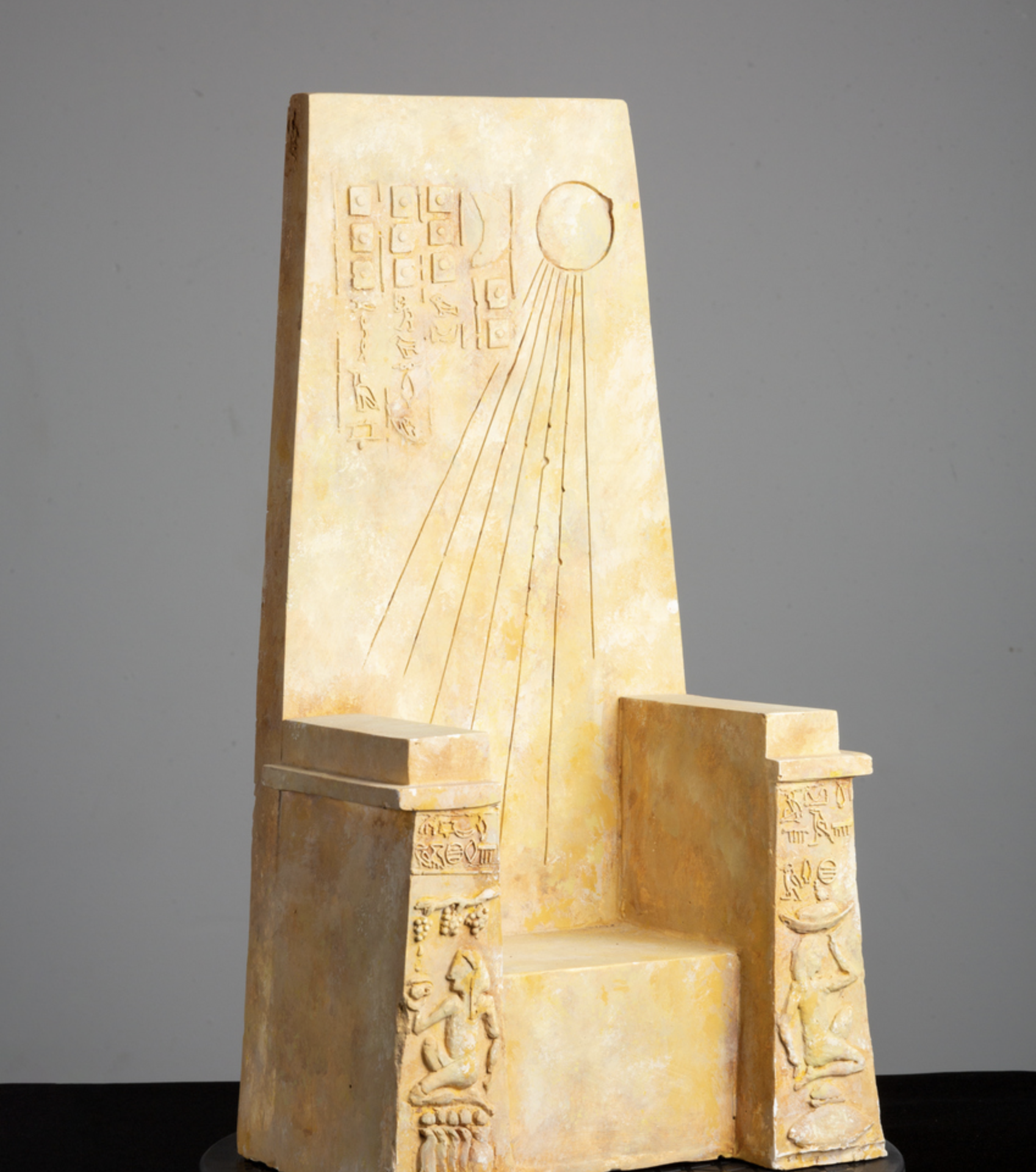