Last week, we discussed Abraham’s servant being so eager to fulfill his commitment to Abraham that he would not even eat until he had discharged it and also why midrash believes the servant of Abraham mentioned is Eliezer (because the servant of Abraham at Genesis 15:2 is called Eliezer) and what is the meaning of Eliezer’s name (God is my help). We discussed the fact the Eliezer begins completing his task by telling the story of completing his task and that, for the reader, this a story repetition that invites us to look for any differences in the second version and for what might explain them.

We discussed trope emphasizing Sarah giving birth and Eliezer stating that Abraham had made Isaac sole heir of his many possessions (which would indicate that Rebecca would have a more than comfortable life if she married Isaac) and that Abraham required Eliezer to look for a wife in Abraham’s family, not among the Canaanites, and not to leave Isaac there should the family decide Rebecca would not to marry. We discussed Eliezer’s phrase “speaking in my heart” meaning either praying or speaking to self, Eliezer’s story-telling ability and diplomacy and his finishing by asking the family to tell him if they are exercising kindness and truth (chesed and emet) with him (that is, giving Rebecca to be Isaac’s wife) or not.

We discussed the importance of names in Torah, that names often signal what a person will be like (similar to Baddy McBadface) and that Isaac does not get his own name but his name refers to his mother’s laughter (and returned to the discussion of Isaac’s passivity and whether it resulted from how he was treated by his mother or by his father). We discussed as well that Haredi interpretations of Torah frequently endeavor to make major figures into paradigms of goodness and so are sometimes limited in their usefulness for our interpretive purposes. In addition, we have discussed in the last few weeks the literary devices in the story of Eliezer seeking out Rebecca to be Isaac’s wife including the repetition of similar sounds as often occurs in poetry.

Our artwork this week is by Jewish Israeli sculptor, Aharon Bezalel (1925-2012), originally from Afghanistan — Eliezer and Rebecca (above) and Jacob Struggles with the Angel (below). Bezalel began as a craftsman and went on to study art at the Bezalel Academy. His art was exhibited in Israel, France, the U.S., Canada, and other countries and his sculptures are found in numerous cities and countries around the world. 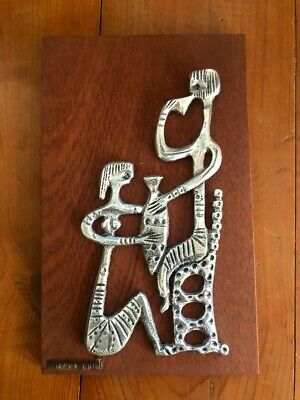 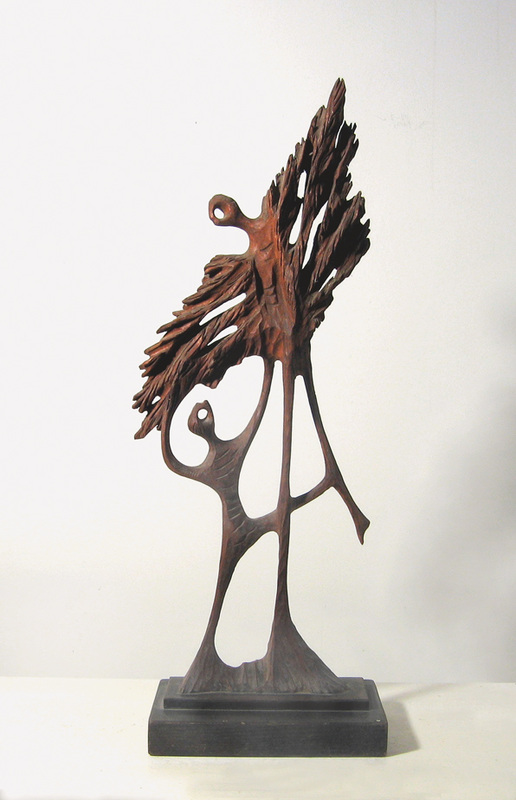