Abraham, Sarah and the Visitors I

A topic we have discussed recently, in conjunction with Abraham laughing, was whether God laughs (infrequently, we think).

Last week we discussed the three people who visited Abraham and a number of ways of interpreting the passages in which they are present. We discussed the fact that YHVH appeared to Abraham but does not say or do anything (which is unusual), that the three people (anashim) who appear to him do not walk up and appear but simply appear standing over Abraham when he raises his eyes, that YHVH appearing but not saying or doing anything and the three people simply appearing over Abraham (without walking up to him) lead some interpreters in different periods to say that the three people actually are angels (or concretions of YHVH), that the interpretation that the people are in fact angels is so entrenched we might want to consider other interpretations, that Abraham bows to the ground before them but the grammar allows that it may be that all four of them bow, that Abraham addresses them as ‘my lord’ (or, ‘my lords’) using the actual word for lord not YHVH which often is translated as LORD, that Abraham was sitting at his tent in the heat of the day only three days after his circumcision so was probably resting and recovering when he jumps up to serve the visitors.

We also discussed that some commentators derive the obligation to visit the sick from this passage, that Abraham tells the visitors he knows why they came by (namely, to drink, eat and relax and then go on–if that is exactly what he means), that Ishmael, the first to be circumcised, was probably sitting around somewhere near Abraham while this all was going on (maybe playing on his Xbox or pouting), why Abraham offers a little water and a piece of bread when in fact he is going to give the visitors a sumptuous meal (perhaps out of humility, perhaps a standard way of expressing what is called later called hospitality–hakhnasat orchim, the bringing in of strangers–namely to put the emphasis on the visitors, not on the one who gives hospitality), that he tells them they can wash their feet (rather than washing their feet for them), that their feet probably were dusty (and so need cleaning), that the visitors end the discussion by saying something that amounts to go ahead.

We also discussed the fact that different thinkers and traditions interpret the passage differently. Christians see the three people as representing the triune nature of God. Muslims see this passage as pertaining to Abraham as the father of hospitality (hospitality being important both to Jewish and Muslim traditions). And, as ever, we discussed a lot of other things. 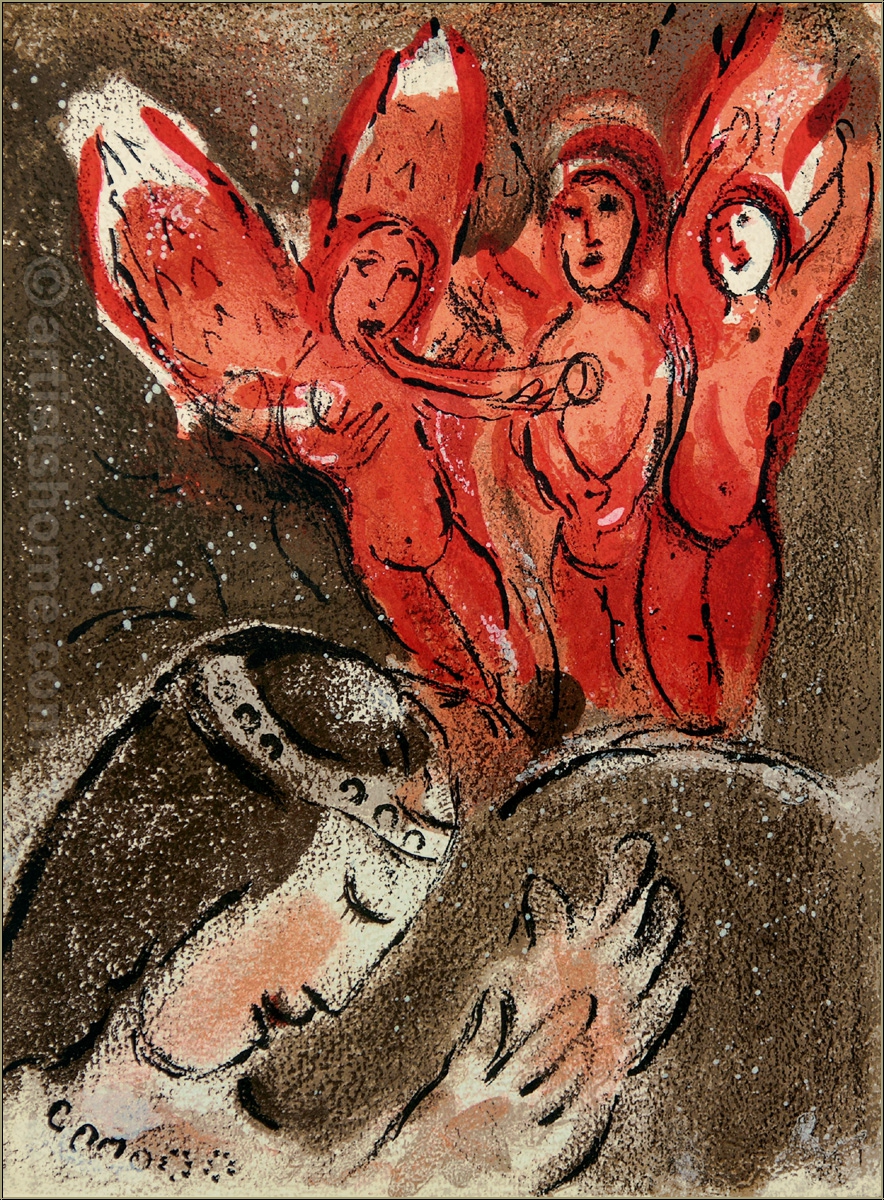 Sarah and the Angels (Marc Chagall) 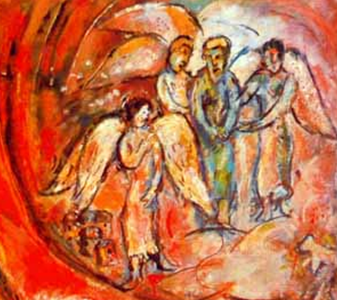 Abraham and the Angels (Marc Chagall)