Abraham, Sarah and the Visitors II

Recently, we discussed the fact that Abraham lifted up his eyes (and then saw the visitors), the difference between looking and seeing, that what is indicated might be that Abraham had a vision as well as the idea of passing by, transgression or being transgressive.

Last week, we discussed Abraham hurrying to see about feeding the visitors, that he ordered Sarah to make cakes for them out of fine flour (a lot of fine flour), that his hospitality required her work (not his) and that of a servant who prepared a calf for them, that the feast was lavish and not simply a little something to eat as Abraham described it when he invited the visitors, that Rashi thinks there were three choice calves not just one so that a tongue with mustard could be offered to each of the visitors (ha!), that Sarah was in the tent when the annunciation happened and had to hear it given to Abraham from a distance rather than having it declared to her directly, what it means that Sarah laughed “inside her” (that she was being quiet about it, that her whole insides or whole being was laughing, etc.), her astonishment that, when she was worn or dried out, and Abraham was so old, she was to have pleasure or delight, that she probably was reacting to how difficult and tiring it would be to have a son at that age and to the fact that she was no longer menstruating, that when YHVH repeats to Abraham what Sarah had said, YHVH leaves out Sarah’s mention of how old Abraham was.

We talked about the four dots that appear in Torah scrolls in verse 9 (and that such dots are a rare occurrence in Torah) and that we do not know what they mean, time in the Hebrew of Torah, that a vav makes a future tense into a past tense, that the comprehension of time in their language is different than ours, the resources of Sefaria, including the text of Torah in English and Hebrew with cantillation marks, medieval commentators, midrashic interpretations, and that clicking on a Hebrew word in Sefaria’s Hebrew text gives you a definition of the word. And, we discussed a number of other topics as well.

Artwork this week is by Jewish Israeli painter, Avner Moriah (1953- ) who has created an Illuminated Book of Genesis with illustrations from nearly every page of Genesis and The Illuminated Torah: Paintings and Essays on the Weekly Portions from which Parashat Vayeira (above) and Parashat Lech Lecha (below) come. He is also known for a series of on-site paintings of Israel’s landscapes. Israeli born, Moriah was educated at the Bezalel Academy and at Yale University and lives in Jerusalem. 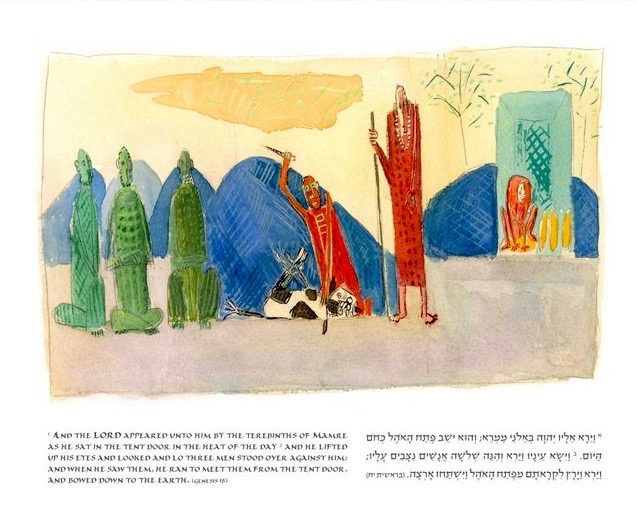 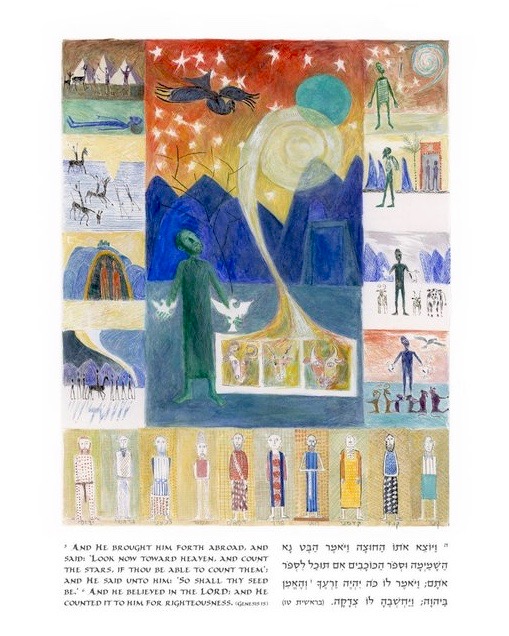 « Abraham, Sarah and the Visitors I » Sarah Laughs and God Makes Plans