Last week we discussed that YHVH told Abraham that Sarah would have a child, that Sarah lied (if ‘lied’ is really the best translation) and told YHVH that she did not laugh, that it in fact might not have been a lie given that she was described as laughing “inside her” so that Sarah may have felt that she had held off the laugh, that YHVH responded to her saying that she did in fact laugh, that the text seems to excuse her by asserting that she ‘lied’ because she was afraid.

We discussed that the anashim (or, probably, two of them) rose up from there and looked down at Sodom, that Abraham walked with them to see them off, that YHVH asked whether he should conceal from Abraham what he was about to do (presumably, destroy Sodom) and we wondered why he would conceal it (and that YHVH may not have really been thinking of concealing what he was doing but using a figure of speech indicating that it was difficult to tell him), that the reason he gives for his question is because Abraham will become a great nation through (or in or by) which all the nations of the earth would be blessed (presumably meaning that since Sodom and Gomorrah were part of the land YHVH was giving to Abraham, Abraham should know that parts of it were to be destroyed).

We also discussed that YHVH’s purpose in knowing Abraham was so that Abraham would command/instruct his children and household so that they would keep YHVH’s way of doing righteousness and justice so that YHVH would bring upon Abraham what he had said he would (in other words, that Abraham was to teach them to become good and that YHVH treating them well would be consequent on that), that righteousness (tzedakah) and justice (mishpat) can be understood as characteristics or character traits not actions indicating that following YHVH’s way is being a certain type of person (a righteous and just person).

We went on to discuss YHVH saying that the outcry of Sodom was great and their sin heavy and that he would go down to Sodom to see if they had been doing things of the sort to merit such an outcry and so, if they had not, he would know (that is, he was going down to see if they really were doing gravely sinful things in order to make sure that punishment would be justified), and that the anashim went off to Sodom but Abraham stayed before YHVH, came forward and asked if YHVH planned to destroy (or, sweep away) the righteous with the wicked, that Abraham is assuming that YHVH plans to destroy people and also that he wants to make sure any destruction is just and does not unfairly kill righteous people–indicating that both YHVH are assuming punishment should be merited, YHVH by making sure the outcry was about real wickedness and Abraham by asking that the righteous not be killed along with the wicked. And, we discussed many other topics in our short two hours, believe it or not.

This week’s artwork is more work by Nahum HaLevi, “The Lot-Sodomski Family Portrait: Consanguinity and Conflagration” (above) and “Without End” (below). HaLevi gives detailed descriptions explaining each painting here. “The Family Portrait” is one of HaLevi’s Genesis paintings and shows in compressed form the whole history of the family of Abraham’s nephew, Lot. “Without End” is one of Halevi’s pre-Genesis paintings and shows divine emanations of YHVH resting on Shabbat and YHVH as Ein Sof wearing a tallit. The descriptions contain more detail about each painting and show HaLevi not just as a fine artist but also a fascinating interpreter of Torah. 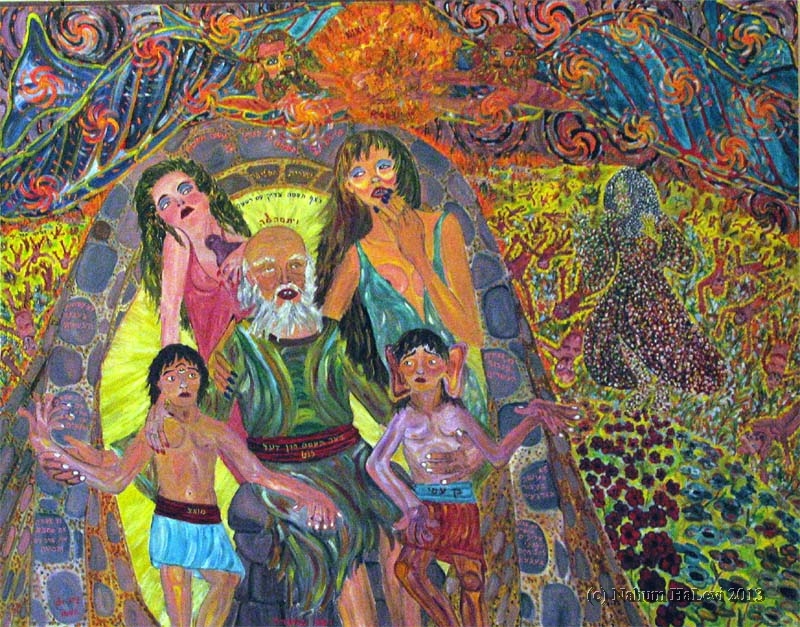 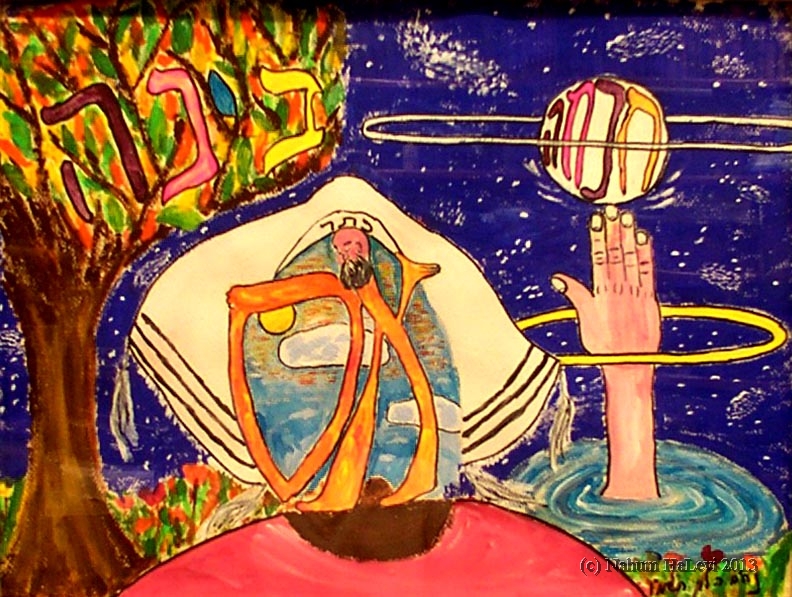