Last week, we discussed why Abraham did not want his servant to take Isaac back to where Abraham came from (Abraham was not sure Isaac would return? Abraham didn’t want Isaac to be part of the decision-making process regarding Isaac’s own wife? Etc.). We discussed why Abraham adds to his exhortation not to take Isaac back there the description of YHVH as YHVH of the heavens (not YHVH of the heavens and earth) who took me here to give this land to me and my seed (meaning, I’m not letting Isaac leave here because this is where we will inherit and I want him to be here, safe and sound). We once again discussed Isaac’s passivity, went over old ideas about that and also entertained the idea that Isaac became passive because Abraham did not allow Isaac to have agency (for example, treating him as an object to be killed or not letting him be part of the process of choosing his own wife).

We discussed Abraham telling the servant that YHVH would send an angel ahead of him (suggesting YHVH would be making the selection or aiding in the selection of the wife). We discussed that ten camels went with them, laden with the best things Abraham owned. We discussed Rebecca’s response to the servant and camels, that she gave water to the servant and also to the camels (and, I might note, camels drink a lot of water!). Was she a generous person? Or a shrewd person who was doing what she could to catch the eye of the servant of a wealthy man? Did she see marrying Isaac as a ‘way out of Dodge’? Was she courageous to go forth to a land she does not know? Or prudent, given that the man she would marry was a man of substance?

We discussed possible meanings of the name “Rebecca” (stall? ensnarer? securer? secured? ensnared?) and thought the name itself indicates more than just kindly generosity but her ability to ensnare others or her status of being secure, perhaps secure in herself.

We discussed the servant asking YHVH to make something happen (a sign of whom to select to be Isaac’s wife) and that this kind of request was unique and the sign he describes (namely, that the one who when asked for drink gives it and also gives drink for the camels) and that Rebecca was there in front of him even before he finished speaking. We also discussed that Rebecca is described as beautiful/good-looking and as a virgin and wondered how it was known that she was a virgin and who it was who knew that (the omniscient narrator?) and whether they really knew that. We didn’t discuss the meaning of “no man had known her” or the idea that maybe it meant more than that she had not had sex but meant that no man there really knew who she was, namely, a generous, prudent, smart, shrewd and venturesome person, ready for an important future.

Our artwork this week is again by Israeli-Jewish painter, Abel Pann (1883-1963), Rebecca (above) and Biblical Figure (below). He was part of a group of people in Jerusalem who painted Biblical scenes in the 1920s. His paintings show the influence of 19th century Orientalism, art nouveau and the symbolist movement. 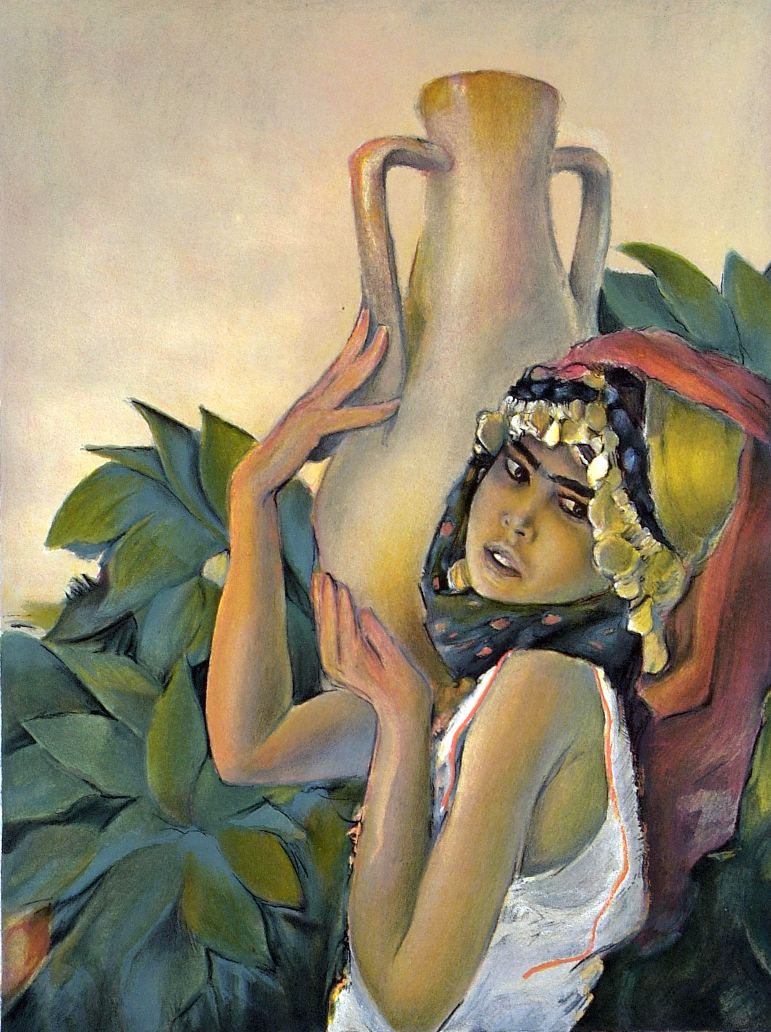 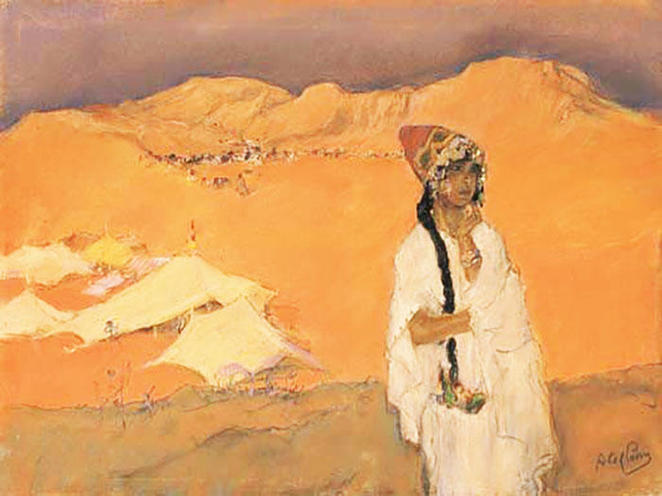