Last week, we discussed different interpretations of what Isaac was doing in the field toward evening (was he meditating? was he walking? was he praying?). The meaning of ‘suach’ is uncertain so interpreters and translators must make a decision. We discussed Isaac looking up and seeing camels and Rebecca looking up and seeing Isaac (we discussed whether from the standpoint of the story, Isaac missed what was crucial but Rebecca did not). We wondered whether Isaac even knew that Abraham’s servant had gone in search of a wife for him and noted that this first encounter between Rebecca and Isaac was a chance meeting.

We noted that when Rebecca looked up and saw Isaac, she fell off her camel. Pretty dramatic—but it was her first meeting with her soon-to-be husband. She asks who he is and the servant says “my lord” (meaning one of the men he serves, in this case, specifically Isaac) at which point she covers herself with a veil. The servant is said then to tell Isaac all the things he (the servant) had done (and we were glad the text does not retell the story a third time).

At this point, Isaac brings Rebecca into his mother, Sarah’s, tent, takes her, makes her his wife, loves her and is comforted (or, consoled) by her. We discussed at length the significance of taking her specifically to his mother’s tent (with some having sympathetic and others more critical reactions). Given that his father almost had tried to kill him, Isaac may feel comfortable only with his mother and in her surroundings. Some, though, think he is too tied to his mother (the Hebrew can be read to say he took Rebecca into the tent as his mother Sarah, indicating the close tie). Midrash says the light that went out when Sarah died came back on when Isaac brought Rebecca into the tent. We wondered why the text says Isaac loved Rebecca. Torah does not say that about other patriarchs. Perhaps it was because he was so traumatized by his father almost killing him that his ability to love was in question.

We then discussed Abraham taking a third wife, Keturah, who bore him six sons. We noted that Keturah is ignored in Jewish tradition. The text makes a point of Abraham giving everything he had to Isaac. Some say Abraham took a third wife to take care of him in his old age. Others that it was so that Ishmael would not think he had a claim to inheritance from Abraham (given that he would no longer be the only son other than Isaac). Another possibility is that, through the children, God’s promise to make nations of Abraham would be fulfilled. We noted Abraham sending the children of his concubines far away to the East, again suggesting he wanted no conflict over his true line.

Our artwork this week is two remarkable bronze reliefs by New York Jewish painter, sculptor and poet, Lynda Caspe, The Birth of Jacob and Esau (above) and Jacob’s Ladder (below). Her portrayal of Jacob and Esau’s birth includes two midwives, each holding a baby, while one of them, Jacob, holds on to the other’s, Esau’s, heel, indicating the conflict that will come and the difficulty of the birth. The other bronze shows Jacob lying on the ground with his head on a rock with his arms open wide in awe, perhaps, or astonishment, looking up as the delicate angels appear to be escaping him on their way to the heavens.

The Birth of Jacob and Esau (Lynda Caspe) 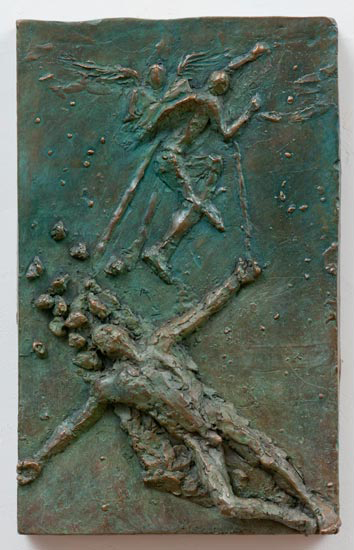