Last week we discussed the vow Jacob made in Beth El and its conditional nature (if God stays with me and watches me on my way, gives me bread and clothing, and I come back in peace, then YHVH will be my God, this stone pillar will be God’s house and everything you give me I’ll tithe to you), that it shows that Jacob has not yet taken YHVH to be his God and that he has a strategic, cheeky, wrestling and wheeler-dealer nature—or not too cheeky since he makes the vow (or most of it, anyway) not to God but to himself—that then Jacob lifts up his feet (an unusual phrase) and goes east (perhaps the unusual phrase suggests that after his dream of ascending and descending angels, he is excited and energized to go forward, especially after having had to flee for his life with nothing) and that his trip is reminiscent of the servant’s trip to find Isaac a wife but that he came with wealth and retinue while Jacob came alone and with nothing.

We discussed Jacob seeing a well in the field and that a well is a meeting place and a place potentially to meet a woman who could be his wife, that there was a stone on the mouth of the well (which sets things up nicely for him to show his strength) (and that stones show up a lot in discussion of Jacob), that the covered well might symbolize Rachel who will not bear children for quite a while (or is that stretching things), that Jacob asks the men at the well where they are from and if they know Laban son of Nahor, that they say they are from Haran and that they do know him—and that Rachel, Laban’s daughter, is coming right then with sheep (and how convenient it is that she is coming up right when he gets there), that the men he speaks to do not accept his idea that they should water their flock right then because they must wait until others come and then the stone will be moved off and back on the well (suggesting that they are unable to do it but need to wait until there is a larger group to do it).

We discussed Rachel coming with her sheep since she was a shepherdess (and whether it was unusual for a woman to be one), that he moved the stone when he saw her (indicating that he was strong and also perhaps that the sight of her made him stronger) and watered Laban’s sheep, that he kissed Rachel, raised his voice and wept, what kind of kiss it was (was it a greeting kiss? a sensual kiss? a French kiss? was a kiss on meeting in this way unusual?), his weeping (that it may have been from things going so well after they had not gone well before), that she brought him to Laban’s house and told Laban “all these things” (including that he had to flee? or that he left because he wanted to marry within the family? what does “all” mean here?). We discussed him staying with Laban for a month and Laban questioning whether it was right for him to work for him for free (and whether that was Laban setting things right and paying Jacob for his work or Laban indirectly and politely suggesting Jacob should start doing some work but would be paid), that Laban told Jacob to tell him what his pay should be, that Leah was the older sister who had weak or tender eyes (meaning could be either) and that Rachel was the younger and had an attractive figure and was beautiful.

We discussed the text saying that Jacob loved Rachel, whether that was unusual or not (given that Torah does not discuss interior feelings much) and noted that Isaac loved Rebecca, and that Jacob offered to work for seven years for Rachel, that Laban said it was better to give her to Jacob than to another man (and whether ‘other’ simply means someone else or ‘other’ in the sense of an outsider, that is, someone who is seen as outside the group and foreign), that seven years were like a few days in his eyes because he loved her so much (more stress on his love for her), that Laban tricks him (the trickster getting a trick played on him!) and gives him Leah instead of Rachel to sleep with, that when he realized that in the morning (he seems not to have known before morning), Laban tells him it’s not done that way there but the older daughter is married first and that he could work another seven years and then be given Rachel. We discussed that Jacob did that and as a result Rachel became his wife, that he had sex with her and that he loved her more than Leah. We actually discussed quite a bit more, believe it or not.

Our artwork is by Moroccan-Israeli artist, Raphael Abecassis (1953- ), Jacob’s Ladder (above)–which portrays the stone altar and the angels on the ladder–and King David’s Song (below). Abecassis combines Torah stories with Kabbalistic themes and North African elements. He utilizes découpage, a process of layering parts of the painting to give it depth and a sense of movement. In the U.S., he is known for having designed the stained glass windows in Sephardic Temple Tifereth Israel. 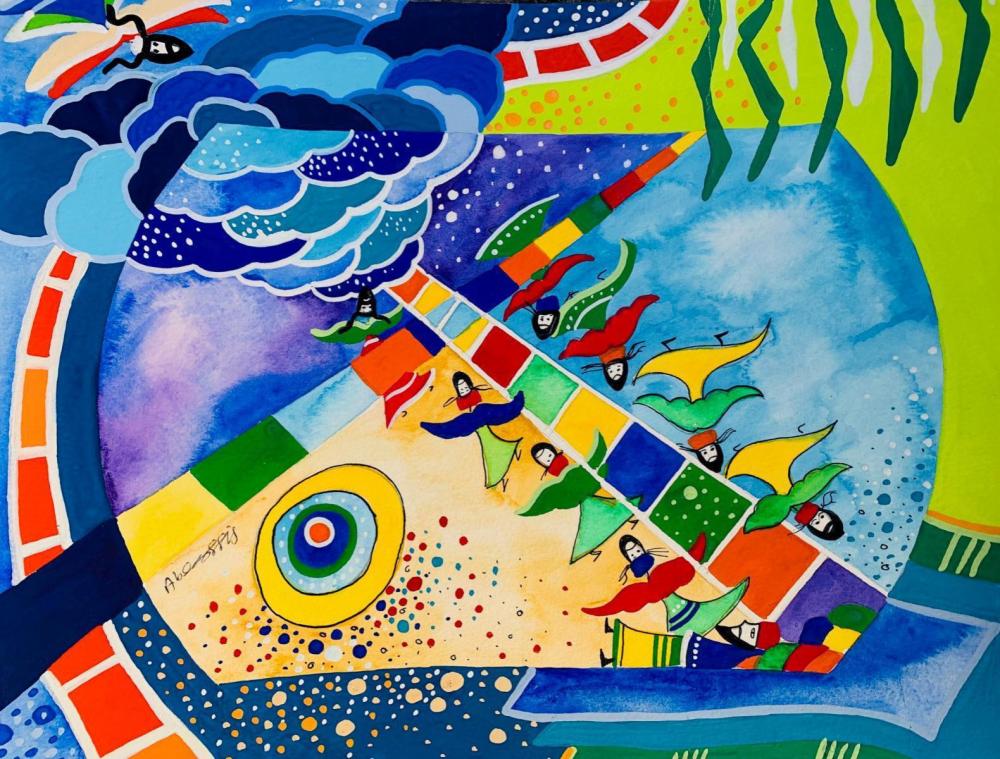