Angels Show Jacob the Way to the Heavens

Last week, we discussed Isaac blessing Jacob and why he was blessing Jacob a second time (maybe because he was going on a journey), instructing him not to marry a Canaanite woman (following what appeared to be Rebecca’s wish), the common tendency for people to want their children to marry within the group, that Jacob was going to Rebecca’s father, Bethuel’s, to take a wife from among the daughters of Rebecca’s brother, Laban.

We noted that El Shaddai as a name for YHVH occurs only eight times in Torah (one of which we saw at Genesis 17:1), that it has been construed to mean the powerful one though that interpretation is not favored today, that Shaddai means breasts (specifically, breasts used to nurse), that Jacob was to be fertile and numerous, to be an assembly of peoples and to possess land (reminding us that Torah is about land, wealth and progeny).

We discussed Esau believing that Canaanite women displeased Isaac and marrying within the group, specifically, Mahalath, daughter of Ishmael and sister of Ishmael’s first-born son, Nebaioth (Esau’s two previous wives were Canaanites—Judith and Basemath), how sad it was that Esau had so little self-esteem that he felt he had to do that, that though he was marrying within the family he was marrying the somewhat disowned side of the family (though perhaps not, since Isaac had reunited with Ishmael when Abraham died).

We discussed Jacob going from Beersheba toward Haran and chancing on a certain place (makom) where he stopped for the night since the sun had set, taking one of the stones of the place (makom), placing it under his head and laying down in that place (makom), that the word for place (makom) is repeated three times suggesting that instead of getting the timeline of a life we are getting emphasis on place, Jacob’s dream of a stairway or ramp (not ladder) like the ramps seen at that time on ziggurats, that the ramp rested on earth and extended to the heavens, that the angels were going up and down on it (and that some interpreters do and some do not think it is important that up is mentioned first rather than down—since angels would have to come down before going up).

We discussed YHVH standing by Jacob and saying he will give the land Jacob is on to him, that this is Jacob’s covenantal moment (like Abraham’s covenant of the pieces), that YHVH promises to protect Jacob and bring him back to the land, and that when Jacob awakes from the dream he had with his head on a rock (or, on rocks), he believes YHVH is present in the place though he had not before realized that and that Jacob was shaken, thought the place was the awesome (Norah) house of God and the gateway to heaven and that he then set the rock up as a pillar, poured oil on top of it and named the site (that previously had been called Luz) Bethel (House of God).

We discussed what Jacob’s experience there was exactly—perhaps of the axis mundi (axis of the world where heavens connect with earth—as per Mircea Eliade), of a place with a special holiness (as some places have), of the ramp being a place with special access to the heavens or the holy, of the rock as altar suggesting that any place could be holy if we treat it as such and regard it as such (since YHVH is everywhere), that the name change of the place was important like the name change of a person—Abraham to Abram or Sarai to Sarah, for example—and the meaning of anointing (an offering like a libation? giving up something beautiful and valuable, oil? making something special? making it easier for Jacob to recognize the place when he came back to it?) and, believe it or not, we discussed a lot more.

Our artwork this week is the striking work of Australian Jewish artist, Victor Majzner (1945- ), from his llluminated Torah, Vayeitzei (above) and Vayishlach (below). Vayeitzei shows the ramp and the angels/birds going up and down on it in Jacob’s dream (plus the twelve rocks that, in Genesis Rabbah 68, R. Judah says Jacob placed there) while Vayishlach portrays a blue Jacob wrestling with a red angel–the wrestling that, as we will see, leads to his name change—with the palm-leafed sukkah covering open to the sky suggesting that Jacob, after wrestling, did get his connection to the heavens. 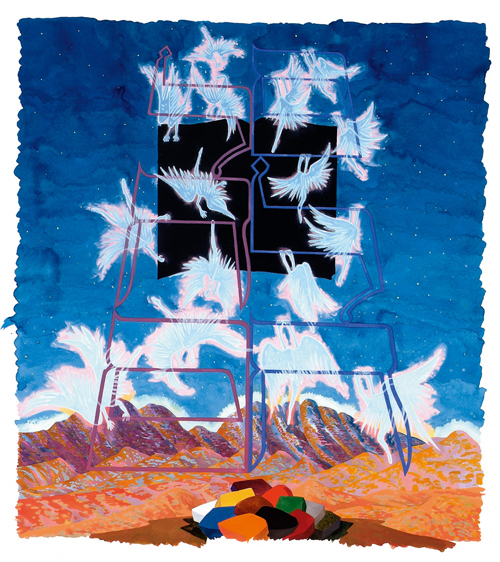 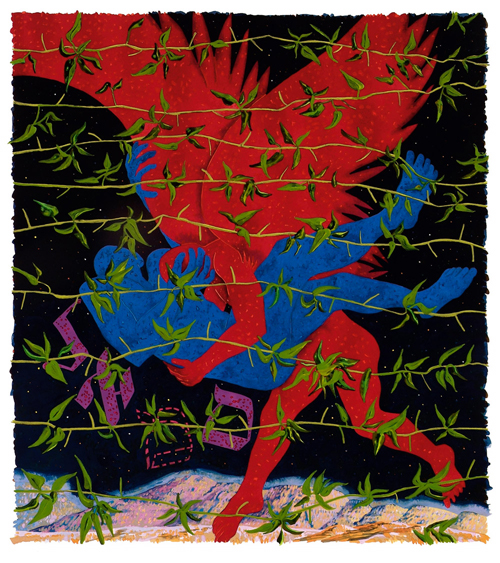