Leah and Rachel Make a Deal

Last week we discussed Leah having a third and fourth son and that her hopes seem to be declining, that she names the third Levi because now Jacob will become attached to her (not love her but become attached to her or bound to her) and the fourth Judah because this time she will praise YHVH (with no mention of Jacob’s relation to her), that then she stops giving birth, that Rachel was jealous of Leah due to her childbearing and tells Jacob to give her children or she will die, that it is interesting she demands the children from Jacob as if he could make it happen and that he has the same thought, gets very angry (his nostrils flare) and asks if he is in place of God who has held back children from her.

We discussed Rachel offering her maid, Bilhah, to Jacob for sex so that Bilhah will give birth and, through that, Rachel will get a child (she’ll give birth on Rachel’s knees), that Jacob has sex with Bilhah who bears two sons for Jacob, that Rachel names the first son Dan because God had judged in her favor and the second son Naphtali because she had a Godlike struggle with her sister and prevailed, that her struggle might be comparable to Jacob’s struggles with his brother and, as we will see later, with the angel (but Jacob’s gets discussed more) and that Bilhah is a slave (though not a chattel slave) and we discussed different kinds of slavery.

We discussed Leah realizing she had stopped giving birth and giving Zilpah, her maid (another slave), to Jacob to have sex with, that Zilpah had two sons for Jacob and named the first Gad after saying “With fortune!” and the second Asher after saying “With my happiness because daughters will wish me happiness!”, that Reuben found mandrakes in the field during the wheat harvest and brought them to his mother, Leah, that mandrakes were a plant with white or purple flowers, large yellow berries and a fleshy branching root that was thought to resemble a human being and to aid in fertility, that Rachel asked Leah to give her some (so she would be fertile), that Leah said isn’t it enough that you took my man and now you want to take my son’s mandrakes, too, that Rachel made a deal with Leah that if she would give Rachel the mandrakes, Rachel would let Jacob have sex with Leah, that Leah told Jacob she had hired him with the mandrakes and that Jacob then had sex with Leah.

Our artwork this week is by Dutch Israeli painter, Miriam Mehadipur (1960- ), Leah and Rachel (above) and Rachel and the Mandrake (below). Mehadipur studied at the Royal Academy of Art in Holland and moved to Tzfat, Israel, in 1999. The paintings include mandrakes and pomegranates, symbols of fertility, and utilize Persian motifs. In them, Leah’s eyes are open and she is pregnant while Rachel holds the mandrake and her eyes are closed. Is a switch taking place—with “weak-eyed” Leah becoming open-eyed and Rachel the reverse? Does the mandrake not only produce children but make other changes in the sisters’ relationship and roles? Are they learning to cooperate rather than engaging in competition as is common with women in patriarchal systems? Certainly, Rachel letting Leah have sex with Jacob (in exchange for receiving the mandrake) reverses the shame Leah must feel due to Jacob spurning and hating her, and Leah giving Rachel the mandrake reverses the shame she must feel because YHVH closed her womb. Together, the two sisters create a more fair situation for both of them. 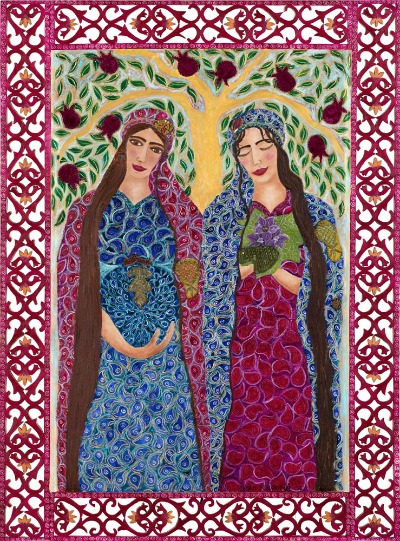 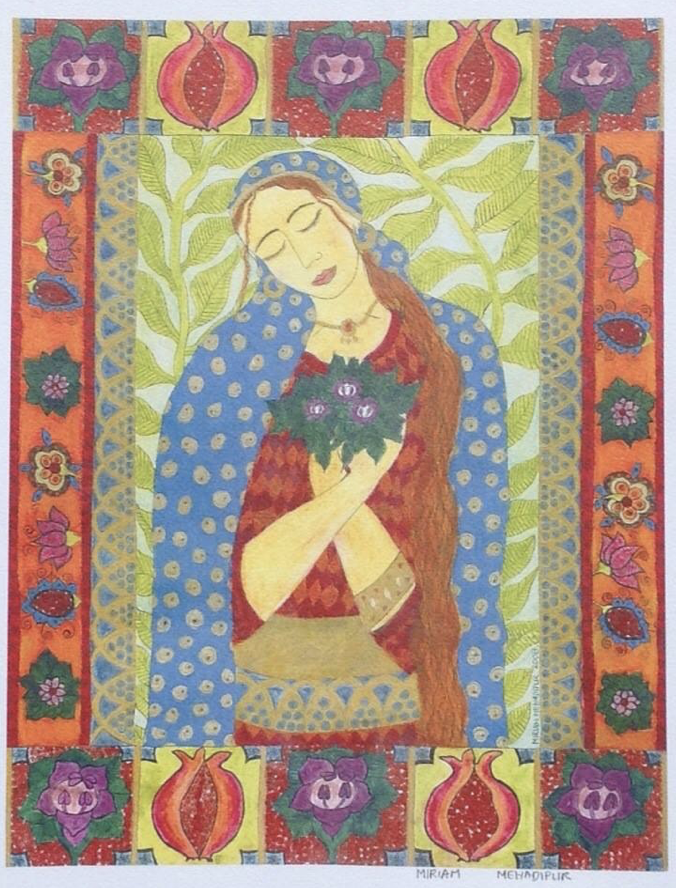 Rachel and the Mandrake (Miriam Mehadipur)