Sitting on the Gods

Starting with Genesis 31-29 –Laban says to Jacob, “I have the power to harm you, but the God of your father told me not to do you any harm.” We noted that “your father” here is grammatically incorrect because the “your” ending is plural when it should be singular. Perhaps it is an actual error in the Torah, or perhaps the narrator wanted to show that Laban was ignorant?

Laban demands to know why Jacob stole his gods. The theme of thievery (“ganav” and “gazal” are the Hebrew words) is everywhere in this story. Also, here the actual word “gods” is used rather than “teraphim” (household gods or idols.) Jacob says that Laban is free to search for his gods, and anyone possessing them would be condemned to death. We see a parenthetical statement that “of course” Jacob didn’t know that Rachel had indeed stolen the idols. It is very rare in the Torah for there to be an insertion by a narrator like this. We discussed how “what goes around comes around” – Jacob cheats Esau out of his birthright, now Jacob and Laban are cheating each other – and oaths have consequences. Jacob commits his own daughter to death!

Laban searches the tents, but Rachel has already taken the idols and hidden them by putting them in the camel cushions and sitting on them! Then she says that she has her period and can’t get up. We noted that sitting on gods shows disrespect. We also noted that Rachel shrewdly took the extreme taboo against interacting with menstruating women and used it to her advantage to subvert the existing autocracy. We questioned why there was such a taboo and even fear of menstruating women – perhaps because women bleed every month and don’t die?

Jacob then defends himself as if he is in a court of law. He is very self-righteous, insisting that he went “over and above” as a shepherd for Laban – never even took advantage when an animal died, but replaced the animal. (But we know he is a trickster. What about the spotted lambs and the sticks etc.?) Verse 40 starts with the words “I was” but then switches ungrammatically to a list of all the abuses he suffered. Perhaps he was so angry that his speech gets mixed up?

We mentioned that the translation “time and again”, when Jacob says he is cheated, is literally “ten times”. This is the same expression Jacob uses when convincing his wives to leave. Jacob says that the “fear” of Isaac (simple word for fear, not the word “awe”) and the power of God is why he is not leaving empty-handed. We asked what the word “fear” meant here. Is Jacob afraid that his father is dying?

Both Laban and Jacob claim to each other that, essentially, “everything you own is because of ME.” Laban even insists that his daughters and grandchildren are still “his”. We have two tricksters talking to each other. They are so alike! This is an alpha male “pissing contest”. Eventually, the two men decide that because of divine intervention, they must each give up their demands and formalize an agreement to separate. Many legal words are used here.

The men and their followers gather stones and set up a stone pillar to mark their agreement. Stones are a theme in the Jacob story, at Bethel and at the well with Rachel. We noticed that the two names used for the place, Yegar-sahadutha or Gal-ed, showed that Jacob and Laban spoke two different languages. Perhaps this indicated that they were alien to each other and from different cultural backgrounds.

The men agree that Jacob will not harm Laban’s daughters and God himself will be a witness. The mound and the pillar are also a witness that the men and their followers will stay separate and not cross over the boundary between them with hostile intent. In the end, they offer a sacrifice and share a meal to “seal the deal”.

JPS ends with this meal and the two men and their followers spending the night “on the Height”. The King James version concludes with the 1st verse of Genesis 32, in which the men and their families officially part.

Our artwork this week is by Ukrainian-American Jewish artist, Ben-Zion Weinman, Jacob and the Angel (above) and A Moment’s Rest (below). When he came to the U.S., Weinman taught Hebrew. Later, he became an artist, lived in the Chelsea neighborhood of New York City and changed his name to Ben-Zion (leaving off the last name). He was an expressionist painter, part of a group called The Ten which included Mark Rothko, Adolph Gottlieb and others.

This post is authored by Laura Ashkin-Stanton (summary) and Deborah Achtenberg (artwork). 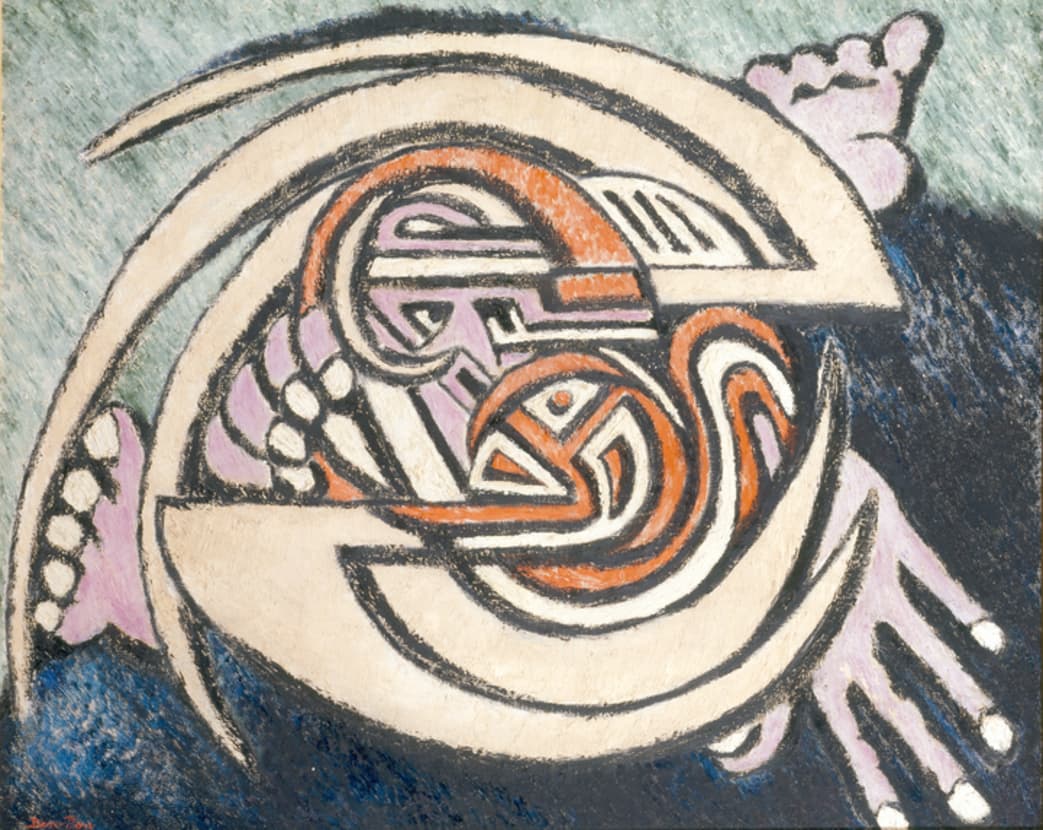 Jacob and the Angel (Ben-Zion Weinman) 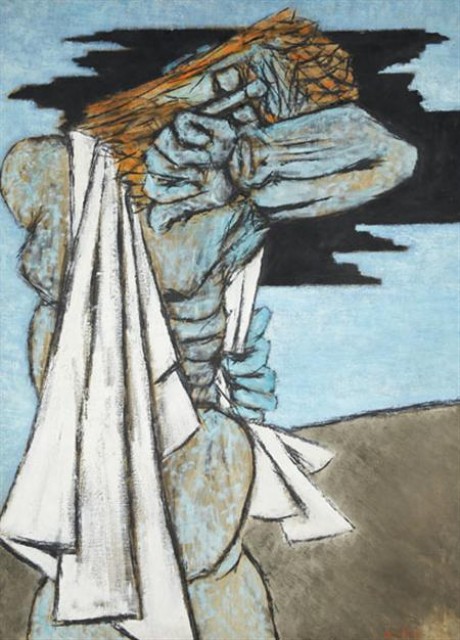