We discussed Jacob going on his way, angels coming upon him and him seeing them and calling the place Mahanaim (a pair of camps), we discussed the dual (not singular or plural but dual, designating a pair) and wondered if the angel’s story was a truncated one from another source (since it seems incomplete).

We discussed Jacob’s fear of Esau (who was in the land of Seir in Edom) and how Jacob strategized or schemed to get in Esau’s good graces. First, he told messengers—in order to find favor in Esau’s eyes–to call Esau “lord” and say that his “servant” (Jacob) had stayed at Laban’s and acquired livestock and servants. We discussed the servant coming back and saying that Esau was coming to Jacob with four hundred men. We wondered why the servants did not say anything else such as what Esau’s attitude was toward Jacob or what he might have said about coming (though perhaps he did not think it was relevant because he did not know the history of conflict between Jacob and Esau).

We discussed Jacob’s fear of Esau (and thought we, too, might be frightened of four hundred men) and that Jacob was very afraid and felt anguish and, as another strategy, divided the people into two camps, we discussed Jacob as a divider—he was divided from his brother, he divided Rachel and Leah, he divided from Laban, etc. We discussed Jacob’s strategy of reminding YHVH that he was the God of his father and grandfather and had promised to deal well with Jacob when he went back to his birthplace and also of stating that he was not worthy of the kindness and faithfulness that such a promise indicated and that was indicated by his going to Laban’s with nothing but a rod when he crossed the Jordan and coming back with two camps, of expressing his fear of Esau (of Esau’s hand) and of restating that God said he would do well by Jacob and make him like the uncountable sands of the sea (even though God never said that to him but had said it instead to Abraham) (though we also wondered if, in all the strategizing, Jacob might be beginning to feel some guilt or remorse and some sense that he was not worthy). We discussed Jacob as entitled and as the “trust fund baby of Torah.”

We discussed his continued strategizing, after spending the night there, by sending a huge offering to Esau, placing it in herds he told to keep a distance one from the other and, when Esau asked who they belonged to, to say “to your servant, Jacob,” that he sent them as an offering and that he was coming as well and that he did this to appease Esau’s face with the offerings in front of him and see Esau’s face and maybe Esau would raise his face (that is, show him favor). We discussed the repeated use of the term “face” (five times in two verses as pointed out by Friedman) suggesting that Jacob was going to have to face his past, face his brother and, eventually, see God face-to-face (also pointed out by Friedman).

Our artwork this week is by contemporary Russian-Israeli Jewish artist, Elisheva Nesis, Jacob and the Angel (above) and Mandrake (below). Nesis studied fine art in Russia and Israel and writing and psychiatry in Russia. Her painting makes the wrestling with the angel contemporary by making Jacob an Israeli soldier. Look closer at her mandrake and you’ll see several people in it. Nesis lives in Jerusalem and says, whimsically, “I live 2 miles from the center of the Universe. The problem is that you can’t hide yourself from the God here.” 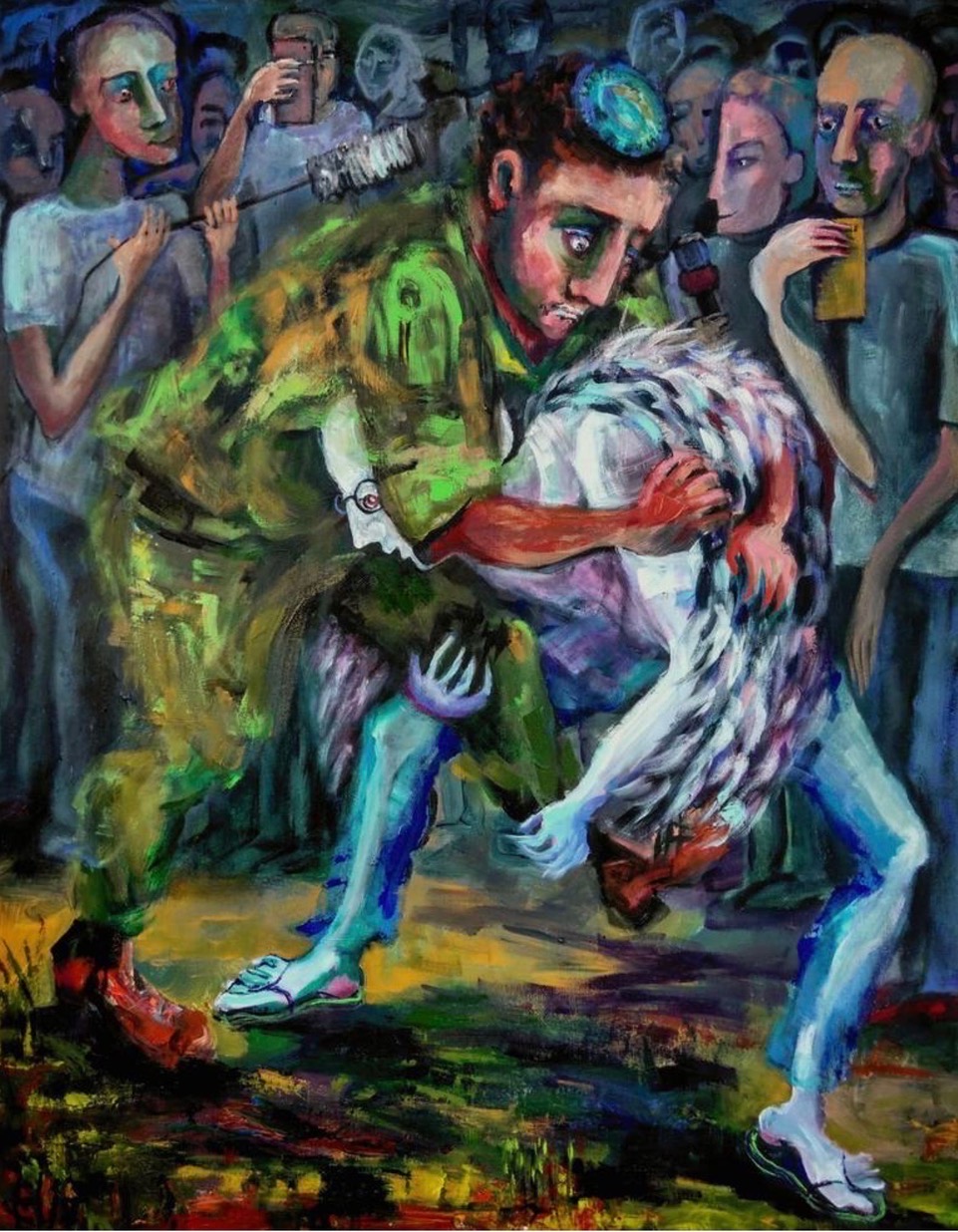 Jacob and the Angel by Elisheva Nesis 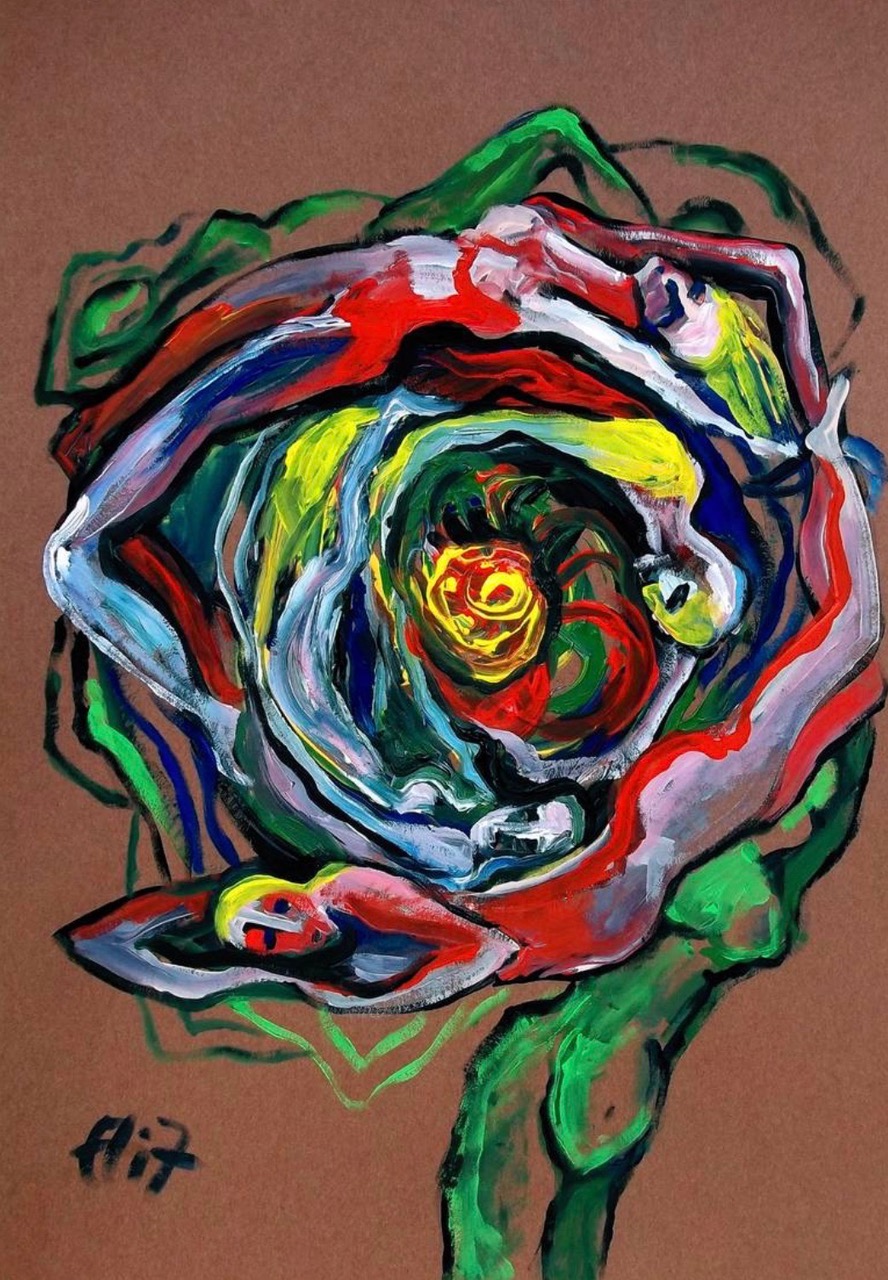 » Struggling with God and People