Struggling with God and People

Last week we discussed Jacob taking his maidservants, wives, and children and crossing the Jabbok ford and noted the text refers to eleven children when there actually were twelve (eleven sons and one daughter), leaving the only girl, Dinah, out (because of sexism). We discussed the idea that crossing the Jabbok was an important moment of decision and change although we also noted that after he takes them across, he sends his possessions across, suggesting that he had gone back (though perhaps he simply had all the people and possessions cross and then he crossed). We discussed the drama of the short statement, “And Jacob was left by himself,” asking why more is not said (although short sentences can provide emphasis). We discussed how Torah describes interiority in an exterior way. Perhaps the sentence implies that it was a moment of introspection, of being with himself psychologically, making it a moment of decision.

We discussed a man wrestling with Jacob until dawn rose–or was it an angel? We looked again at the idea, from Friedman, that an angel is a hypostasis or concretion of YHVH which would explain why Jacob wrestled with a man but is said to have wrestled with God. We also considered the idea that he wrestled with himself. In any case, the change represented by crossing the Jabbok ford was preceded or accompanied by Jacob
wrestling, the completion of which made a real crossing possible.

We discussed the angel touching (just touching) Jacob’s thigh and dislocating it (like a mythical story or, say, a story of a fantastically able karate teacher). We discussed the man telling Jacob to let him go because dawn was approaching and why dawn would matter (perhaps, as the medieval commentators say, because he needed to go for his morning prayers! or, perhaps because the whole story is a dream which ends at dawn). We discussed Jacob demanding a blessing to let the man go, the angel asking his name (didn’t the angel know his name; or is it like YHVH asking questions to which YHVH knows the answer?), and the importance of names in Torah and in general.

We discussed the man giving Jacob the name “Israel” because Jacob struggled or wrestled with God and with people and the possibility, grammatically, that it was God who wrestled not Jacob. The struggling with God and people claim suggests, again, that the man might be an angel (the human-formed hypostasis of God) but, we thought, could also refer to all of Jacob’s struggling with people—with Esau, Laban, etc. We discussed names again because Jacob asks the man’s name and the man does not answer but asks why he wants to know and, after that, blesses Jacob. We also discussed the fact that, though Jacob’s name is changed to “Israel,” he is often still called Jacob (for example, in “God of Abraham, Isaac and Jacob”) in contrast to the name changes for Abraham and Sarah which supersede their previous names.

We discussed Jacob naming the place “Peni-El” because, he says, “I’ve seen God face-to-face and my life has been delivered.” We discussed again the repeated use of “face” in the story of Jacob’s return, the idea once again that interior is expressed as exterior (some kind of change of heart expressed in terms of the orientation of the face) and what facing actually is. Jacob seems to be facing up to the bad things he has done and his injury suggests facing up is connected to being humbled (physically and emotionally). Or is he facing himself? Or is facing up to the bad things you’ve done to people the same as facing up to God? Finally, we discussed the text saying that the reason we don’t eat the tendon of the vein on the inside of the thigh is because the man touched Jacob there (which sounds like a later addition to the text).

Our artwork this week is by German-Israeli Jewish painter and woodcut artist, Jacob Steinhardt (1887–1968), Jacob and Esau (above), and Jacob’s Dream (below). Steinhardt shows Jacob and Esau reconciling (which we are about to discuss) an event that perhaps should resonate in our minds as much as Jacob’s ladder and angels. Steinhardt studied art in Berlin, lived in Paris and Italy, fought in World War I in Poland, Lithuania and Macedonia, and moved to Palestine in 1933 due to harassment by the Nazis. He was director of the Bezalel Academy of Art in Jerusalem in the 1950s. 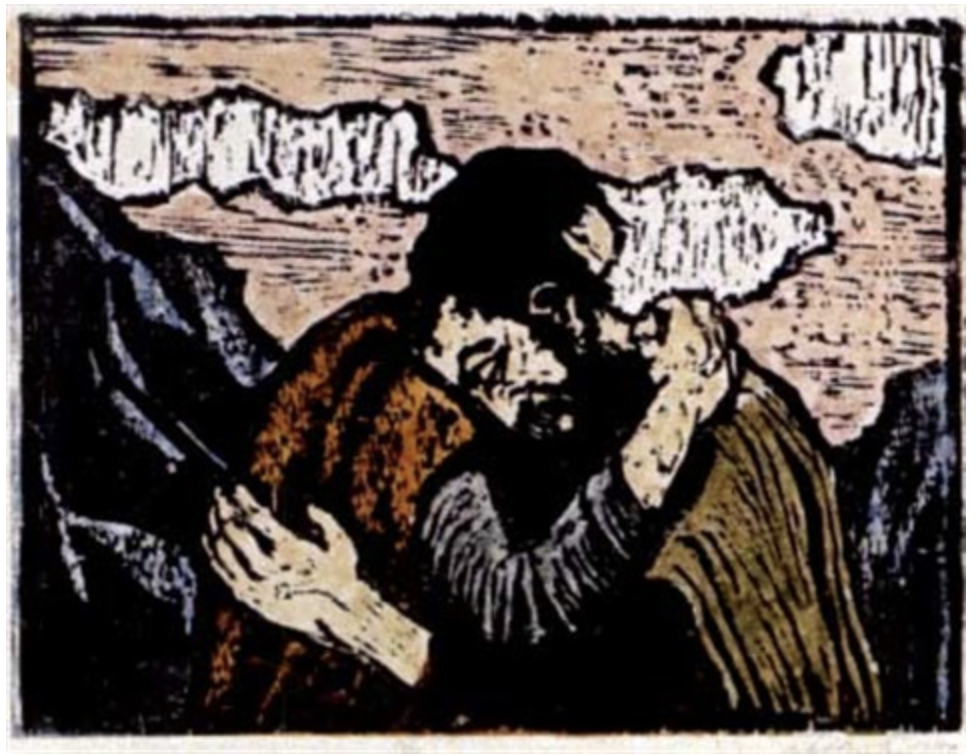 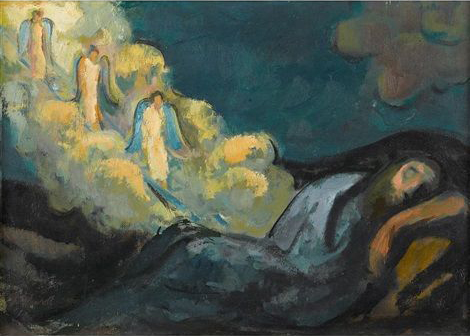