Last week we discussed Jacob seeing Esau coming with 400 men and then dividing the children among Leah, Rachel, and the two maids. We wondered if that was tantamount to using them as human shields and whether Jacob was scheming again or justifiably afraid (or both). We discussed the order—maids and their children first, Leah and her children second, Rachel and Joseph third (least valued first and most valued last? or was Joseph protecting his mother?). We discussed Jacob going ahead of them and bowing to the ground seven times (was it humility? or more scheming? was the limp he had at this point a sign of humility?) until he reached Esau, fell on his neck and kissed him (more scheming? more humility?). We discussed the fact that they then both cried. Esau could have fought with Jacob, given that he had mistreated him so, but instead he cried. We wondered if he had done well enough in life that the former mistreatment did not mean too much to him at this point. We also discussed falling on his neck reminding us of Jacob deceiving Isaac by putting skins on his neck so that Isaac would think he was Esau. It makes the crying stand out even more. We discussed different eras of interpretation—some more critical and some more accepting of Jacob

We discussed Esau asking who the women and children were and Jacob saying they were the children with whom God had graced “your servant” (again putting himself below Esau at least in speech) and that first the maids and their children, then Leah and her children and then Joseph and Rachel bowed (did Joseph go first because he had a special status in the family? or did he come first to protect his mother?). We discussed Esau’s question of who is this camp (perhaps meaning how did you end up with such a big camp) and Jacob saying, to find favor in your eyes (meaning, apparently, they are for you to have). We discussed Esau saying he had a great deal and let what’s yours be yours meaning, keep them). Once again, we noted Esau’s generosity to the brother who had harmed him but also wondered if it was customary first to refuse the offer of a gift but to take it on a second offer. We considered the phrase, When you can say I am I and you are you, then the Messiah will come.

Our artwork this week is more parasha illustration by Montreal Jewish painter, Sheila Nemtin, Parashat Vayishlach (below), and the part of that illustration that shows the meeting of Jacob and Esau (above). Nemtin is working on a series of illustrations and explanations of each of the parishiot. 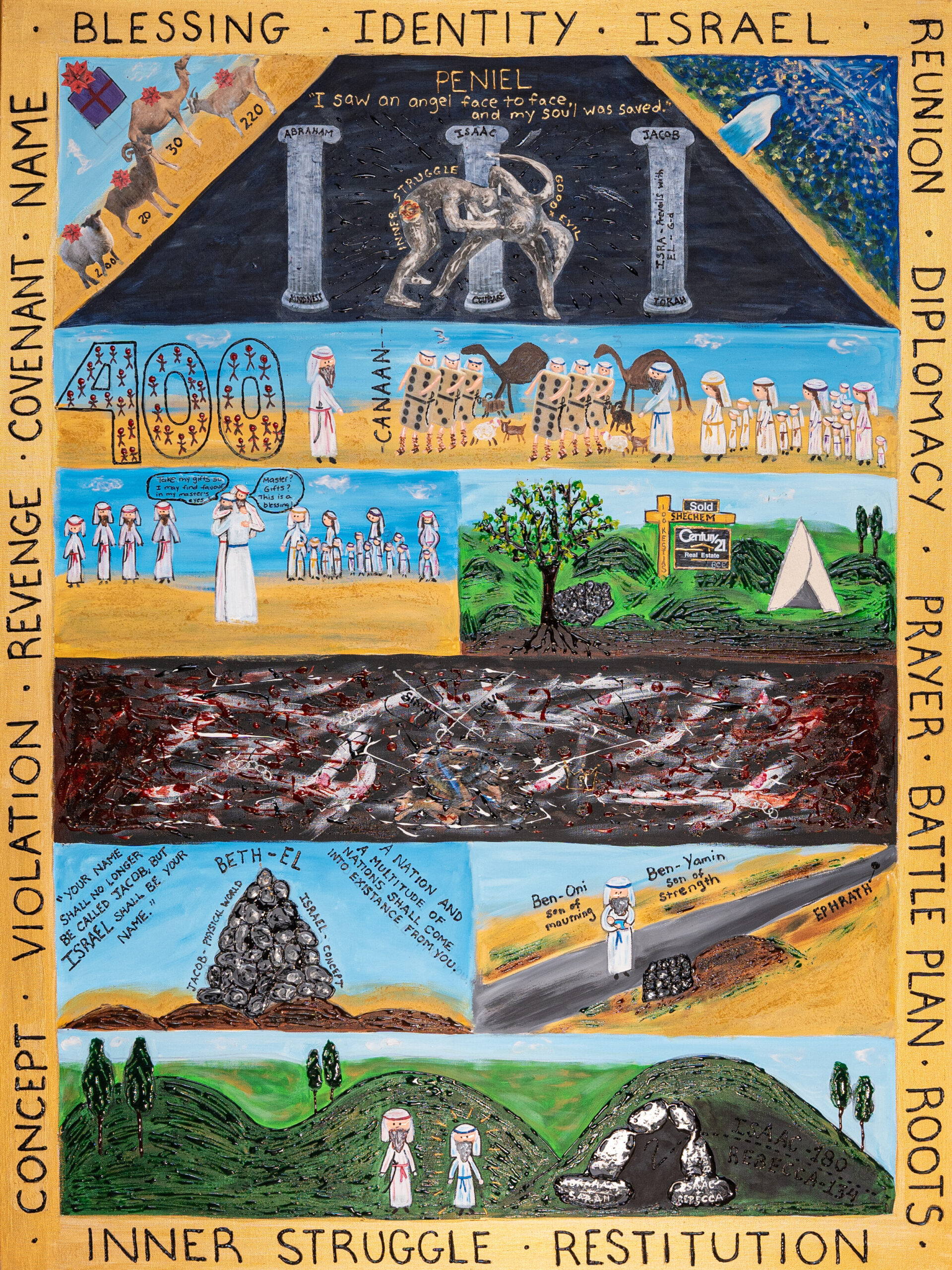 « Struggling with God and People » Reconciliation and Degradation