Last week we discussed the fact that, though the text indicates we are going to hear the line of Jacob (after having heard the line of Esau in chapter 36), we do not actually hear it indicating that something was taken out. We learned that a lot of things are taken out in the Joseph cycle and discussed the fact that two mythologies were combined for one people, one from the northern kingdom and one from the southern kingdom, the united kingdom having created the Torah.

We discussed Joseph being a simple shepherd (and young) who tended flocks with his brothers and brought bad reports of them to his father, Jacob. We discussed why he did that. Was he spoiled, as is often said? Or, instead, was he higher in the hierarchy? He was the favored son of Israel’s favored wife, Rachel (and Rachel’s other son, Benjamin, reminded Israel of her death). We noted the text saying that Israel loved Joseph best of all the brothers (and it saying it was because he was a child of his old age). In addition, Reuben previously had sex with Bilhah, Israel’s concubine and Rachel’s maid, so even though he was the firstborn (the bechor), he was not the favored son. Plus, Simeon and Levi were not favored because they murdered the people of Shechem. Finally, the sons of the concubines were lower in status, leaving Joseph–as a result of all of this–higher than them and the other brothers in the hierarchy. If so, it would be part of his role to watch over things for his father.

We discussed Israel making Joseph an ornamented tunic (or a tunic with sleeves? or a many-colored coat? we do not really know). We noted that a coat is visible and so a sign of favoritism. We discussed the fact that the brothers hated Joseph, seeing that Israel loved him the most. They hated him and were not able to speak a greeting to him. We remembered that Leah was hated. A theme of the stories surrounding Jacob is favoritism and hatred. In the Joseph cycle, Joseph plays the role of Rachel, that is, the one who Jacob favored.

Our artwork this week is by New York Jewish artist, Brian Shapiro (1942- ), Joseph and His Brothers (above), and Joseph Revealed (below). Shapiro studied at the Rochester Institute of Technology and the Art Institute of Chicago. In Joseph and His Brothers, Reuben at left looks guilty and holds Joseph’s colorful coat while the other brothers hold staffs they are using to push their semi-clothed brother, upside down, into a pit. 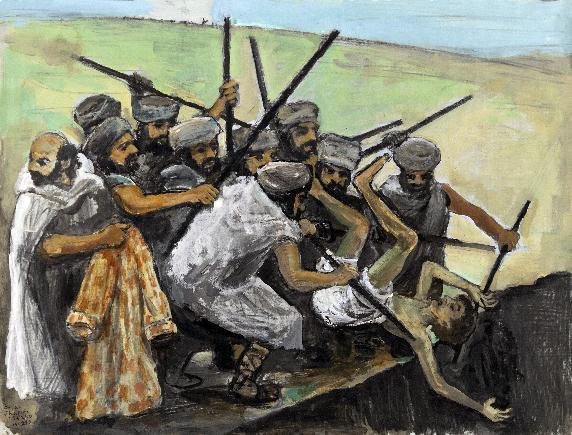 Joseph and His Brothers (Brian Shapiro) 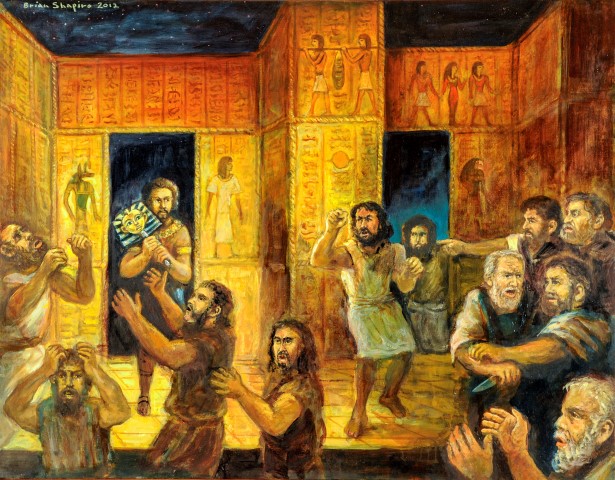