Last week we discussed Joseph’s first two dreams. In the first one, we noted, Joseph says, behold, when we were binding sheaves in the field, behold, my sheaf rose–and stood up, too—and, behold, your sheaves surrounded and bowed to my sheaf. We discussed whether Joseph was naive or arrogant (or naively arrogant). We discussed the word “hinei,” what it means (“behold” or “lo” or “here” or “look”), the fact that it occurs three times in one sentence, and the view that it indicates the excitement he has about what he saw and the youthful naïveté he has in thinking a dream indicating dominance over the others would be received by them as exciting. It is especially naive, we entertained, given that his brothers hate him because he is their father’s favorite—though we also wondered if he knew that he was hated by them.

We noted that they hated him more after the dream and that they asked if he would rule over them and would dominate them. We discussed what the difference might be between the two (and concluded that the second might be more general since the first refers specifically to kingship—though it is not clear that that is the difference). We discussed what the text means when it says they hated him because of his dreams and because of his words. We noted that one translator thinks the phrase is an example of hendiadys, a figure of speech in which a conjunction is used to stand for a subordination, and so translates it as “his talk about his dreams” while another translation takes the phrase as a genuine conjunction and so translates it as “because of his dreams and because of his words.” We discussed what words he might be referring to if the phrase is a genuine conjunction (his retelling of his dreams? his bad reports on them to their father? his naively arrogant mode of speaking in general? etc.). (Here are examples of hendiadys: “we drink from cups and gold,” a conjunction that stands for the subordination “we drink from golden cups;” “by length of time and siege” which stands for “by a long siege.”)

In the second dream, we noted, Joseph says to his father and brothers, behold, I have had another dream and behold the sun, moon and eleven stars bowed to me and we assumed the eleven stars were his brothers, the sun his father and the moon his mother but we noted the inconsistency in this due to the fact that Joseph’s mother had died (perhaps dreams are just inconsistent? perhaps the moon stands for Bilhah?) and we discussed his naïveté and his arrogance (or, his naive arrogance). We discussed Jacob rebuking him, Jacob’s astonishment that Joseph would think he, his wife, and his sons all would bow down to Joseph, the brothers being jealous of him and Jacob taking note of the thing (whatever exactly that is meant to convey).

We thought it was strange that the brothers went to feed Jacob’s sheep in Shechem, where the Dinah story took place, since the place was far away and also would seem ominous—though they might be safe given that, basically, they had massacred everyone who might make trouble with them–and we also thought it was strange that Jacob sent Joseph to them (for two reasons, that Jacob had rebuked Joseph previously so why was he now depending on him and that the brothers hated Joseph so the encounter was not likely a good idea). We noted that Joseph responds, “hineni” (here I am) the phrase often used by someone YHVH has called on to be responsible in some way who is acknowledging their responsibility. We discussed the man in the field who finds Jacob wandering to and fro in a field since he could not find his brothers. We had a range of ideas about who the man might be (from just a passerby to an angel) and noted the man told him they had in fact been there but he had heard them saying they were going to Dothan.

At Dothan, we saw, the brothers saw him coming and conspired to kill him and, in addition, called him the dream-master. We discussed the fact that Joseph’s dreams seem secular, or do not mention YHVH, unlike other dreams so far in Genesis, but that they are prophetic since they do in fact show the dominance Joseph will have in the future and so do have some divine connection. We also discussed the later, Talmudic, idea that dreaming is (one-sixtieth of) prophecy.

This week’s work is by Dutch Jewish artist, Shoshannah Brombacher (1959- ), Joseph in the Pit (above), and Joseph Receives His Coat of Many Colors (below) both from a series of pastel and ink illustrations of the Joseph story. Originally from Amsterdam, Brombacher currently lives in Berlin. She studied at the University of Leyden (Holland) where she specialized in Medieval Sephardic Hebrew poetry and wrote a Ph.D. thesis on the 17th century Amsterdam Jewish community. As an artist, she is mainly self-taught. About her creations, she says, “My art is like the water of the canals of my native Amsterdam, Rembrandt’s city: the deeper you look into it, the more you see.” 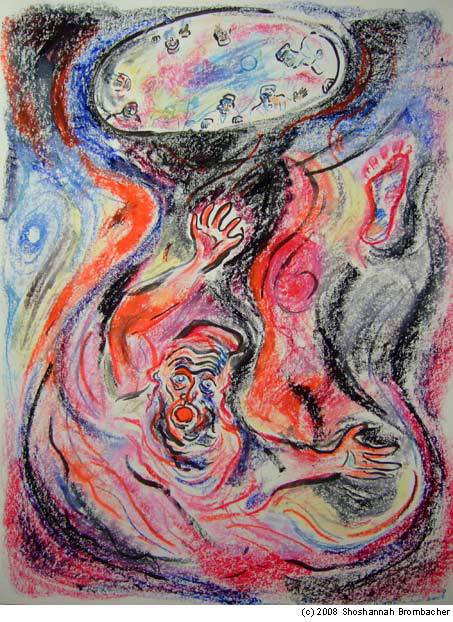 Joseph in the Pit (Shoshannah Brombacher) 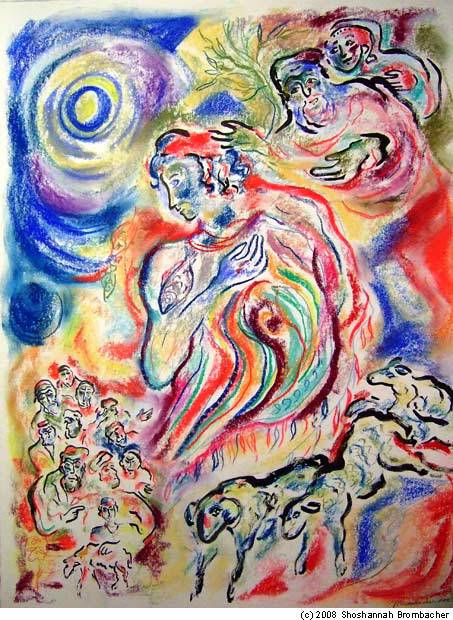 Joseph Receives His Coat of Many Colors (Shoshannah Brombacher)