Last week, we continued with the idea, first presented to us three weeks ago by R. Sara, of gaps or inconsistencies in the Joseph cycle and the idea from some contemporary commentators that the text is a composite of northern and southern kingdom stories about Joseph and his brothers, a northern kingdom story in which Reuben is the hero and a southern kingdom story in which Judah is the hero. The redactor, it seems, put the stories together to make one story but with repetitions, unexplained items and inconsistencies.

For example, why wasn’t Judah Jacob’s favorite? We can explain away Reuben as well as Simeon and Levi, but not Judah. But perhaps figures in the northern kingdom must be leaders in the first story and Judah must come in later for the southern kingdom. For another example, why were Joseph’s brothers pasturing the flock so far from Hebron in Shechem (a three days’ walk from Hebron) and why was there a reference to the Hebron Valley when there is no Hebron Valley? Perhaps the northern kingdom mentioned Shechem in their version, the southern kingdom mentioned Hebron in theirs and the redactor put the two together. Why does Reuben save Joseph in one verse and Judah save him in another? Why in one verse is Joseph given to the Ishmaelites and in another to the Midianites? Medieval commentators try to resolve the problems by adding to the story—but we did not find their additions believable. A plausible answer is that the different accounts come from two different versions of the story. We looked at a color-coded attempt to separate out the two stories (scroll down).

We discussed resolving problems in a story simply by looking more closely at the story itself to see if we have missed something, forgotten something or not looked broadly enough; we talked about looking at history and what then contemporaneous readers would have known that perhaps we need to bring in to make sense of a story; we talked about looking at literary schemas or patterns that may explain the contours of a story; we talked about looking at the possibility of different sources when such efforts at resolution fail. We discussed the idea that the documentary hypothesis with four different sources (or documents) was routinized and overdone but that a source or documentary approach—sometimes referred to as ‘source criticism’—can be illuminating and called for in other cases. We also talked about the possibility that the text is just corrupt sometimes, that is, that there is a scribal error.)

We discussed Judah’s skillful rhetoric—the rhetoric of self-interest and the rhetoric of morality—for getting the brothers to agree not to kill Joseph and the high degree of anger they have toward Joseph who seems oblivious to it as he goes about wearing his special coat that focuses their anger.

Our artwork this week is by New York Jewish artist, Elke Reva Sudin, Joseph in Exile (above) and Israel, His Wives and the 12 Tribes (below). Joseph in Exile features Orthodox Jews, Shais and Gulienne Rison, as Joseph and Osnat. Joseph holds in his hand the goblet supposedly stolen from him by Benjamin. Osnat, supposedly an Egyptian, is said by midrash to be Dinah’s daughter. Sudin makes stories up-to-date by featuring actual contemporaries. Here, the black couple suggests that Joseph is an outsider even though he is powerful. The siddur in Osnat’s hand seems to call the assimilated Joseph back to his people. 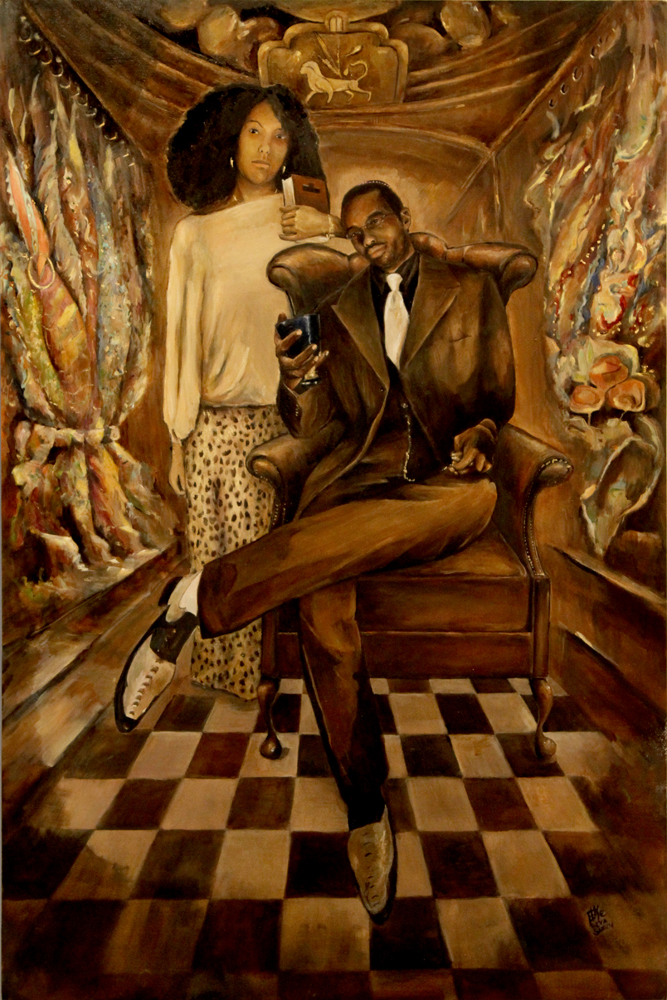 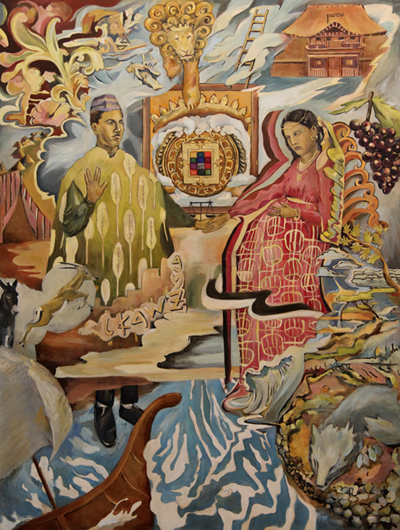 Israel, His Wives and the 12 Tribes (Elke Reva Sudin)