Last week we discussed Potiphar’s wife telling Joseph to lie with her, that the text describes her as his (Joseph’s) master’s wife perhaps indicating the power relation that would make it inadvisable for him to lie with her, and that “lie with” indicates having sex with, that some medieval commentators try to see something other than a sexual connotation. We discussed Joseph’s refusal and the long set of reasons he gives for it—that “my lord” doesn’t know what he has in the house but has put everything in Joseph’s hand, that no one is bigger than Joseph in the house, that he hasn’t held back anything but her because she is his wife, that it would be a great evil and a sin against God—that it indicates two masters he would be acting against, Potiphar and God, and that he is considered a tzaddik by the rabbis for resisting.

We discussed whether Joseph’s list of reasons was a sign that he hesitated and noted the shalshelet trope mark on “he refused,” a trope mark that indicates hesitation that occurs three times in Genesis, when Lot lingers before leaving Sodom (lingers or hesitates), when Eliezer says the one who will give water for the camels is a suitable wife for Isaac (which midrash says indicated he wanted his own daughter to be Isaac’s wife), and here (indicating that Joseph had some hesitation about resisting Potiphar’s wife). We discussed the fact that she might be hard to resist so that hesitation would be understandable and that his long list of reasons might either simply be his reasons or might be a sign that he hesitated (since it is reasons and not feelings) or might be an indication of his skilled rhetoric (since he says no without shaming Potiphar’s wife or making her feel unattractive but only refers to power reasons for his refusal). We noted that Potiphar’s wife spoke to her day after day trying, but not succeeding, to get him to lie with her and to be with her but that Joseph did not listen to her.

We discussed the day that no one was in the house but Joseph and Potiphar’s wife and she once again exhorted him to lie with her, this time while grasping his garment at which point Joseph left the garment in her hand and went outside fleeing and she called the people of the house and accused him of attempting to lie with her. To the people, she says Potiphar brought “us” a Hebrew man to toy with us, trying to get them on her side by describing Joseph as a foreigner. To Potiphar, she refers to Joseph not just as a Hebrew but as a Hebrew slave in order to downgrade him in Potiphar’s eyes. We discussed a lot more, as usual, but this was the gist of it.

Our artwork this week is more examples from Shoshannah Brombacher’s series of drawings, Joseph: A Pictorial, Joseph Interprets the Dream of the Baker (above), and Joseph’s Dreams (below). Brombacher (1959- ) is an Amsterdam Jewish artist, writer, and maggidah (storyteller) living in New York. She is one of a growing number of Orthodox Jewish artists in the US.

Joseph Interprets the Dream of the Baker (Shoshannah Brombacher) 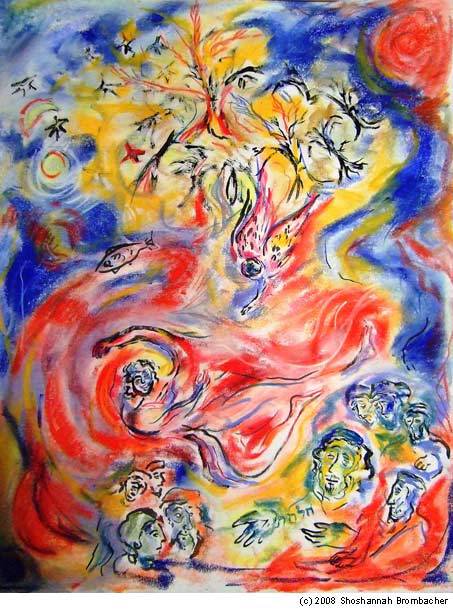