Last week we discussed Judah being told that his daughter-in-law Tamar had whored and was pregnant from whoring, Judah saying to bring her out and let her be burned and that the proposed burning likely was for adultery not whoring since she was in a sense betrothed to the family. We wondered who it was who told Judah (though we have seen gossip among them before). We discussed Tamar being brought out and saying she was pregnant by whomever the seal, staff and cord belonged to (knowing, of course, that they belonged to Judah) and asking if they recognized them. We discussed that the same Hebrew terms for “please recognize” (hacher na) were used in the story of Joseph’s blood-stained coat being presented to Jacob (to help the brothers give the impression that Joseph was dead), that these are the only two occurrences of this expression and that Judah was involved in the deception in each case.

We discussed Judah, after recognizing the items, saying of Tamar, “She’s more right than I am because I did not give her to my son Shelah” and were struck by his unique admission of guilt (or of not being fully in the right). We again discussed her act as both transgressive and at the same time protective of the patriarchy by producing offspring for the family line. We discussed Judah not having sex with her again. We discussed Tamar having twins, the midwife putting a red string on one, Zerah, to indicate he was the first born when that one pulled back his hand and the other, Perez, actually came out first. We saw echoes of the conflict over whom would be born first when Jacob grabbed Esau’s heel seemingly attempting to keep Esau from being the first-born (Genesis 25:21-26).

We discussed Joseph being brought down to Egypt and YHVH being with him so that he was successful in the house of Potiphar, an official of the Pharaoh, and that Joseph found favor in Potiphar’s eyes because he was so successful so that Potiphar attended him and put everything he had in Joseph’s hand and that did not know a thing about the things he had except for the bread he was eating. We noted that YHVH also blessed the Egyptian’s house because of Joseph, blessing everything in house and field. We discussed the reference to Joseph’s beauty—to the fact that he was well-built and handsome—making an appropriate segue to the story of Potiphar’s wife attempting to seduce and have sex with Joseph. The scene is set since Potiphar is enjoying eating and not paying attention to anything else and Joseph is quite good-looking and running everything in house and field.

Believe it or not, we discussed a lot more including Joseph having two masters (YHVH and Potiphar), some interesting midrashim on the passages discussed, similarities with the book of Ruth, that the rabbis were committed to endogamous marriage (marriage within the group) but it’s not clear that YHVH was, the puzzling fact that Joseph is not a patriarch and other fascinating topics.

Our artwork this week is more by New York Jewish artist, Archie Rand, 25: Let the Fringes on Your Clothes Remind You to Have Pure Conduct (above, from Sixty Paintings from the Bible) and Potiphar’s Wife (below, from The 613). Rand is blunt about the sexuality of Genesis 39:12 by using the coarse slang term for having sex and he makes the scene and story more accessible by using comic book color and putting dialogue in a comic book bubble. His work is postmodern by blending “high” and “low” culture—in these two works blending Torah with comic book art. 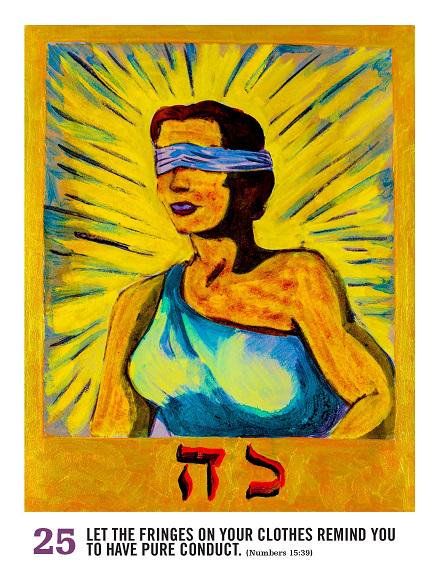 25: Let the Fringes on Your Clothes Remind You to Have Pure Conduct (Archie Rand) 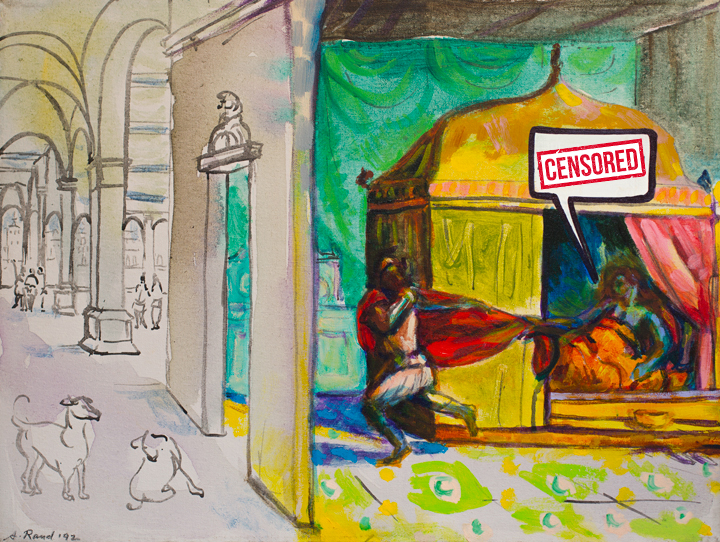