Last week, we discussed Joseph seeing that the drink-steward and baker were upset and the range of meanings for tzoafim (upset, distraught, sad, dispirited, sullen, angry, enraged) and Joseph asking them why they were upset, or more literally why their faces were bad today (and the interesting phenomenon of emotions described through reference to bodily parts such as the face). We discussed the two of them responding that they each had had a dream and that no one could tell them the meaning of it (indicating that they were not simply angry at being in prison but at something new on that day) and Joseph responding that don’t meanings come from God and exhorting them to tell him the dream. We discussed what Joseph meant to convey by ‘meanings come from God’ (that they come from our specific God so that Joseph who follows that God will be the best interpreter? or simply that dreams are divine and thus interpretable?).

We discussed the chief drink-steward’s dream of a vine with three branches with blossoms coming up and grapes produced and noted the compressed temporality in that process (branches that right away produce blossoms and grapes) and the steward pressing grapes into Pharaoh’s cup and setting the cup on Pharaoh’s hand (also suggesting compression, in this case, of the grape juice- or wine-producing process). We noted that the dream had the positive quality of fruitfulness and productivity more generally. We discussed Joseph’s interpretation of the dream that the three branches stand for the three days after which Pharaoh will lift the steward’s head up (alternately, will pardon him) and he will return to his post at which he puts cups in Pharaoh’s hand and that this interpretation captures the positive quality of the dream. We discussed Joseph asking the wine-steward to remember and be kind to Joseph when the steward’s fortunes were better given that, Joseph says, he was stolen from the Hebrews though he did not do anything wrong (and hence should be freed from the prison).

We discussed the chief of the bakers asking Joseph to interpret his dream, too, when he saw that Joseph had conveyed to the steward a good meaning and discussed the baker’s dream that there were three baskets of white bread on his head with the highest containing some of all of Pharaoh’s foods and baked goods and that birds were eating them from the basket on his head. We discussed the similarities in this dream since it has three of something and reference to food and the Pharaoh as well as the differences since there is the opposite of fruitfulness and productivity because the birds come and are destructive of the bread by eating it. We discussed Joseph’s interpretation that the three baskets stand for the three days in which Pharaoh would lift up the baker’s head (where the idiom this time does not have the positive meaning of to pardon as it did for the wine-steward but the negative meaning of lifting the head off) by hanging him on a tree where the birds would eat off his flesh. We discussed how the baker must have reacted given that the beginning of the interpretation sounds the same as the positive interpretation of the previous dream but then the overall and final interpretation in fact is very negative.

We discussed some elements of how to think about dreams in ancient Egypt including that if dreams are repeated they are thought to be more believable (for example, having two dreams of the same kind such as those of the baker and wine-steward), that one of the literary aspects of Torah in general and these passages, in particular, is repetition with variation (which works especially well in oral cultures or when written texts are read aloud), that Joseph seems to be maturing as evidenced by his ability to interpret dreams when in the past he may not have seen the import of his own dreams. We also discussed along the way R. Sara’s notion of the liberal Jewish abdication of ideas like “observant Jew” or “Kashrut” given that liberal Jews do observe and do keep kosher though not always in the way that orthodox Jews do and also discussed different orientations to knowing Hebrew in different parts of and periods of Jewish life.

Our artwork this week is by German-Israeli Jewish farmer and painter, Michael Falk, Joseph and Pharaoh’s Dreams (above), and Joseph and His Brothers (below). Falk raised sheep and grew avocados at Sde Warburg in Israel while doing art on the side. In his early sixties, he began devoting himself entirely to art. His artwork is called naive art and his subjects include his childhood experiences in Germany as well as stories from Torah. 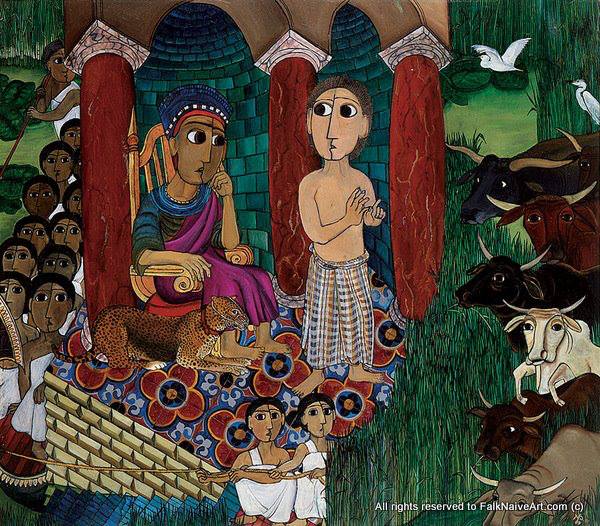 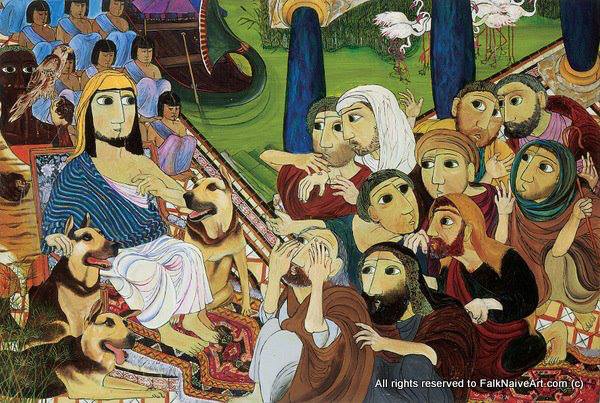 Joseph and His Brothers (Michael Falk)