Last week we discussed that Joseph presumably knew that Pharaoh’s birthday was in three days when he gave his interpretation of the three’s in the chief drink-steward and chief baker’s dreams, that Pharaoh lifted up the head of both the drink-steward and the baker but with opposed meanings, in one case, restoring him to his position and, in the other, hanging him (with the narrator this time, not Joseph, utilizing the ambiguous meaning), that Joseph’s interpretation thus was borne out, that the chief drink-steward did not remember but forgot Joseph (presumably meaning he did not advocate for his release to the Pharaoh), that memory is central to Jewish practice and text and that to remember can mean to take note of in Torah.

We began a new parasha, Miketz, and Joseph’s interpretations of Pharaoh’s dream(s) after two years, one in which seven beautiful-looking and fat-fleshed cows came out of the Nile and fed in the reeds after which seven other cows, bad-looking and thin-fleshed, came out of the Nile and did not initially eat but just stood there (making for a dramatic pause) and then ate the first group of cows—and Pharaoh woke up–and another in which seven ears of grain, fat and good, came up on one stalk and seven other ears of grain, thin and parched by the east wind, grew up after them and ate the fat and full ones—and Pharaoh woke up and, behold, it was a dream. We discussed the fact that the New JPS often does not translate hineh (here! behold! lo! look!) (not to be confused with hineni, here I am). We also discussed binaries in Jewish practice and text such as beautiful vs. bad, fat vs. thin, holy vs. profane, Israel and the nations but also noted that binaries sometimes are blurred as in kol ha moed, the intermediate days of the festivals Passover and Sukkot which are neither completely holy nor completely profane (or both holy and profane) and as in the Joseph cycle in which Israelite and Egyptian are mixed, for example, with the use of many Egyptian terms and with Joseph, a Hebrew, being one of Pharoah’s officials and also being enslaved but at the same time very free.

We discussed Pharaoh’s spirit (ruach) being moved and him calling in the Egyptian magicians and wise men so he could tell them his dream but none of them could explain its meaning. We discussed the chief drink-steward recalling his sins to Pharaoh (presumably that he did not advocate for Joseph’s release) and telling Pharaoh that a Hebrew boy, slave to the chief guard, had interpreted the meaning of his and the baker’s dreams, namely, that he would be restored to his position and the baker would be hanged.

Our artwork this week is two more oil paintings by Rockville, Maryland, Jewish painter, professor, and neurosurgeon, Nahum HaLevi, The Family Jacobowitz: Hidden Faces (above), and The Family Ankhyehova: Cross-Cultural Blessings and Mixed Messages (below). In the first painting, Potiphar’s wife is portrayed as emerging out of Joseph’s head while Jacob, Joseph’s brothers, and Potiphar’s wife are holding on to Joseph’s bloodied coat and to his Egyptian ka or spirit. There’s a lot going on in each of these paintings but one theme we have talked about shows up in each of them, namely, cultural mixing and blurred binaries. In each, Joseph is portrayed in Egyptian dress as are the sons, Ephraim and Manasseh, in the portrayal of Jacob (in black and white) blessing them with Joseph and his wife, Asnat, positioned on each side. Ephraim and Manasseh are, of course, half Israelite and half Egyptian. Look at Jacob’s arms and hands! He initially cannot decide whether to bless the first son or the second. Can we clearly distinguish first son or second? Egyptian or Israelite? No. The binaries are blurred. (For more explanation, see the links above.) 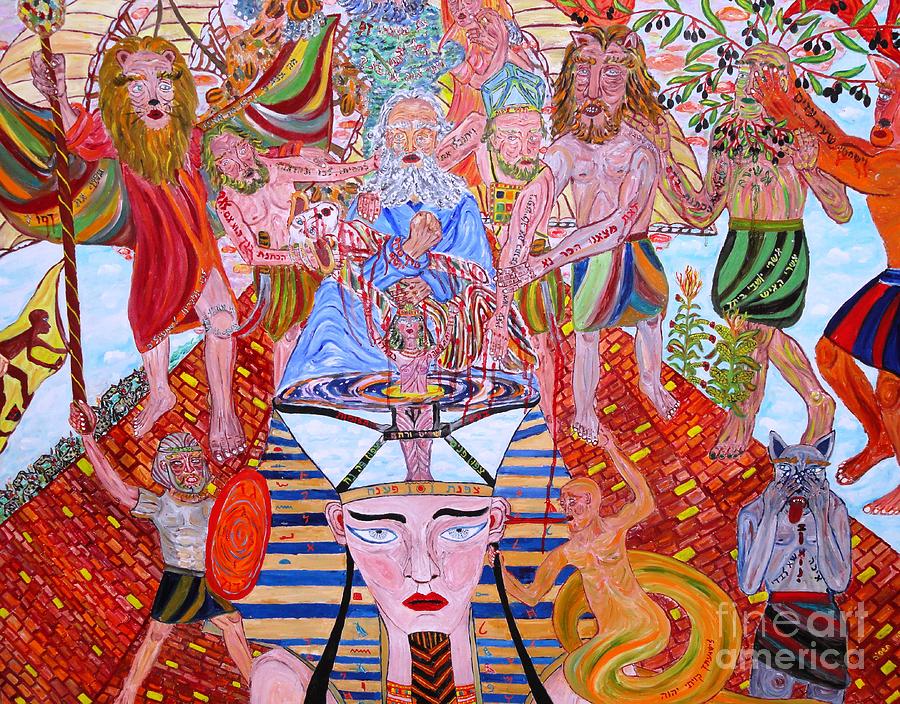 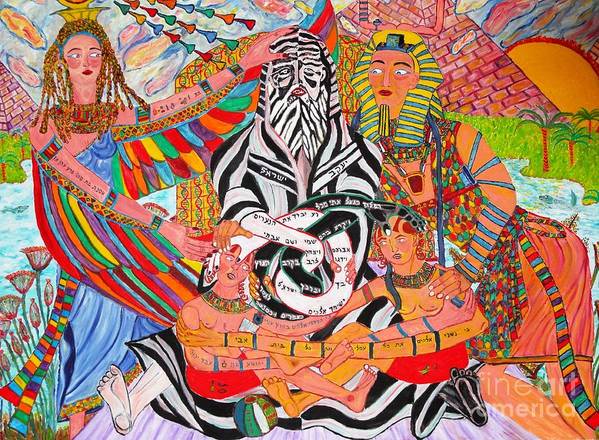