Last week we discussed Joseph testing his brothers by keeping one of the brothers in prison while the rest were to go back with grain, get the youngest brother, and bring him back to confirm their words so they would not die. We discussed what the test was exactly—maybe, first, to see if Benjamin was in fact alive and, second, to see if the brothers would abandon their brother in the Egyptian prison (that is, had they really changed?). We noted that “And they did so” was prospective since their doing so had not happened yet.

We discussed the brothers saying to each other that they were guilty because, when their brother (Joseph) had implored them, with his soul in distress, they did not listen—and that their distress was due to causing his distress. (We have noted recently Joseph doing to the brothers what was done to him.) We noted Reuben deflecting blame from himself by saying that they did not listen when he told them not to sin against Joseph. We noted that they didn’t know Joseph understood what they said since there was an Egyptian-to-Hebrew interpreter there for him. And we noted and discussed Joseph crying after what he heard and discussed the combination of harshness and vulnerability on his part—a harsh test but tears of vulnerability. We discussed Joseph choosing Simeon—of Simeon and Levi—and shackling him in front of them, another expression of harshness.

We discussed Joseph continuing his test by putting grain and also the silver in their sacks. Would they come back given that they had come home set up well, with both grain and silver, we asked. We discussed one of them discovering the silver in his sack and wondering what God had done to them.

Our artwork this week is by Jerusalem-born Israeli Jewish artist, Avner Moriah (1953- ), Joseph is Put in Charge of the Land of Egypt (above) and Parashat Miketz (below), the former from The Illuminated Bible: Genesis and the latter from his Weekly Torah Portion series. Remarkably, Moriah has illuminated all of Torah, a project that took nearly fifteen years. Here’s some of the work and a video about it. 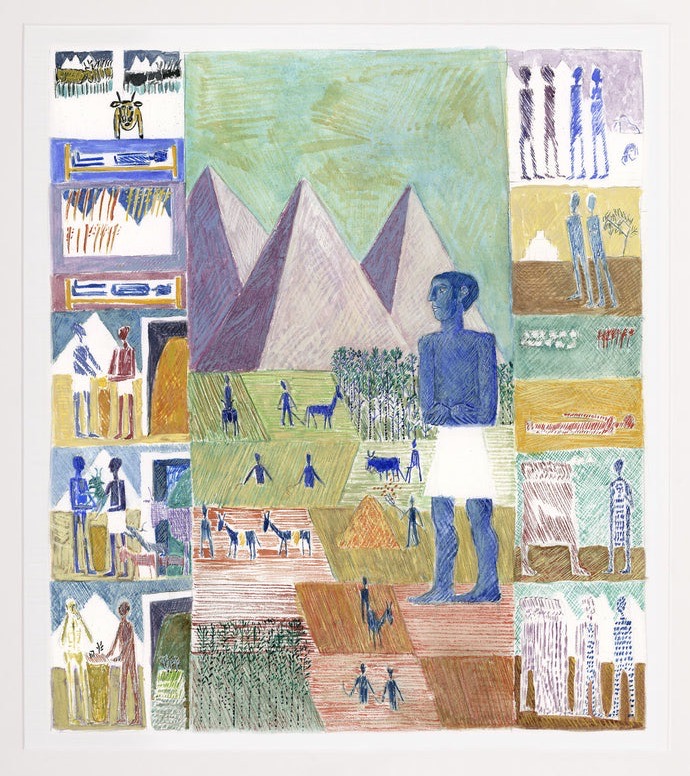 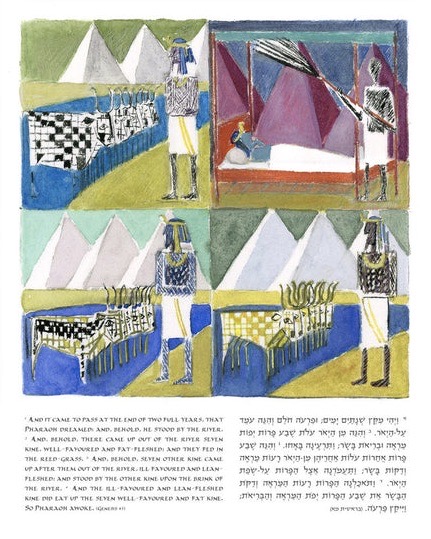