The Brothers Return to Jacob in Canaan

Last week, we discussed the nine brothers going back to Canaan and telling their father, Jacob, what had happened to them. They told him the lord of the land (who is Joseph but they do not know it) spoke hard with them and accused them of spying; that they responded that they were not spies but honest; that they said they had been twelve brothers of whom one had died and the youngest was with their father in Canaan; and that the lord of the land told them he would know they were honest if they would leave one brother in Egypt (Simeon) and bring the youngest one back, taking (food) for the famine with them–and if they did that, he would give back their brother and let them go around the land. We wondered how bringing their brother back would indicate that they were honest and whether Joseph just wanted to see his one brother by his own mother and also was testing them to see if they would come back at all or would leave Simeon just like they sold Joseph (and keep the food and silver).

We discussed them emptying their sacks and each one discovering his bundle of silver in his sack (previously, only one had found his silver in his sack)–and that they and their father were afraid. We discussed Jacob telling them they had bereaved him with Joseph and Simeon gone and them wanting to take Benjamin as well. We noted Jacob saying, all these things have happened to me! And discussed how he makes it all about himself. We also discussed Reuben saying he would kill his two sons if he did not bring Benjamin back and discussed how he could think, if his father was bereaved over the loss of one son, killing two grandsons would please him. We considered whether Reuben might be using a figure of speech and not really suggesting he would kill his sons or whether he meant it literally.

We discussed Jacob declaring Benjamin would not go with them because, since Joseph was dead, Benjamin was alone and if anything happened to him, they would take Jacob’s grey head down to Sheol (that is, he would die). We noticed Jacob’s continued favoritism toward the sons of Rachel, his favorite, in his remark that Benjamin was alone–as if the other brothers didn’t matter. On Jacob’s side, we noted that he did have reason to be unhappy or frustrated with the brothers since they had sold Joseph and, more recently, they had not wanted to go to Egypt to get food for the family (if their looking at each other meant that they each was hoping one of the others would go—and so Jacob sent them all).

We discussed the text saying that the famine was heavy in the land and, when they had finished eating the grain they got from Egypt, their father telling them to go back and buy a little food. We noted that this indicates that, up to that point, they were not planning to go back with Benjamin (perhaps failing the test?) and Judah saying they would not go if they did not take Benjamin because the man, the lord of the land (Joseph) said he would not see them if their brother was not with them. Finally, we discussed Israel (that is, Jacob) asking why they did this wrong to him by telling the lord of the land that they had another brother and their saying that the man had asked and they could not know that he would ask them to bring their brother.

We also discussed the current view that the Joseph story was the last one written in Torah and that it makes a good explanation for how they got to Egypt and assumes the readers know about Egypt (not explaining basic terms related to Egypt, for example).

Our artwork this week is more from Dutch U.S. Jewish artist, Shoshannah Brombacher’s Joseph: A Pictorial, Joseph’s Cup is Found in Benjamin’s Sack (above), and I am Joseph (below). If you like Brombacher’s work, you can follow her on Facebook. She is an active artist, illustrating books and producing artwork related to Torah, Hasidic teachers, Jewish life and holidays, and world events. The artwork above e is meant to convey the brothers’ panic when the cup is found in Benjamin’s sack. They probably think the discovery of. The cup means Benjamin will never go home but will become an Egyptian slave. The Hebrew in the artwork below says “I am Joseph.” The figure painted faintly in the background is Joseph as a young man. Not having seen Joseph since he was young, the brothers do not realize that he is the Egyptian vizier. 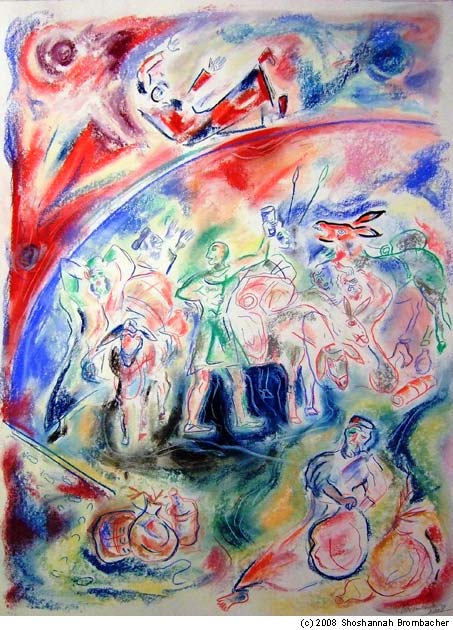 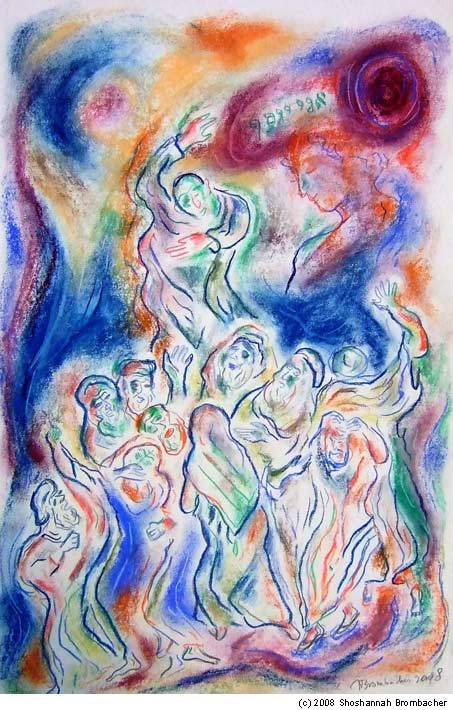 I am Joseph (Shoshana Brombacher)