Judah and the Brothers Go Back to Egypt

Last week, we discussed Judah urging his father, Jacob (referred to by the text as “Israel”), to let him and the other brothers take Benjamin back to Egypt. We noted Judah redeeming himself somewhat by offering to be surety for Benjamin and compared that favorably to Reuben, previously, offering to kill his two sons (something we thought would not appeal to Jacob). We noted that Judah had offered a surety before for Tamar, as payment for having sex with her (thinking she was a prostitute). We also noted favorably Judah saying if he did not bring Benjamin back to Jacob he would have sinned against him. Finally, we discussed how the actual tribe of Judah becoming dominant is reflected in the text ascribing positive qualities to Judah. We also noted some impatience in Judah when he says if they hadn’t delayed, they could have come back from there twice already (and, presumably, have brought Benjamin back already along with some food and other goods that would have helped the family during the famine).

We noted Israel (Jacob) instructing them on how to approach the Pharaoh’s vizier (who is Joseph although they do not know it) and remembered that Jacob is a schemer and presumably had no trust in the vizier and the whole strange situation. He tells them to take various gifts of the land and to take double the money back because “maybe it was a mistake,” that is, maybe the money being back in their bags was a mistake. We wondered what kind of mistake he had in mind (an underling forgot to take the silver out of all the bags?) and thought he likely did not think it was a mistake but a trick to implicate them (and so the gifts were to placate the vizier/Joseph) given that Jacob is a trickster and schemer himself and knows a trick when he sees one. We noted that Jacob refers to YHVH as “El Shaddai” when he expresses his hope that YHVH would give them mercy from the vizier so he would send their other brother and Benjamin back—and finally noted Jacob saying, in resignation, if I am bereaved, I am bereaved. We noted the brothers following Jacob’s instructions and then standing before Joseph, Joseph having a servant have an animal slaughtered for a lunch with them and the servant bringing them into Joseph’s house where the brothers, referred to as “the men,” were afraid they would be assaulted and taken as slaves for stealing the silver.

We discussed “El Shaddai” and the different, but inconclusive, ideas as to what it means. Medieval commentators thought the “dai” referred to sufficiency (as in “dayenu,” it would have been enough) meaning either power (practical) or perfection (philosophical) (with power here being the power to make the vizier merciful). Recent feminists have connected the name to “shadai,” my breasts, giving YHVH feminine characteristics. Each interpretation has some warrant but none is conclusive. We discussed that the Hebrew shin on mezuzot stands for El Shaddai. We wondered why Joseph planned a lunch rather than a dinner and noted that Egyptians generally had two meals a day (mostly of bread and beer) so that the lunch might have been the second and bigger meal.

Our artwork this week is once again by New York Jewish outsider artist, Nathan Hilu (1925-2019), Serah tells Jacob that Joseph is Alive (above) and Isaiah 3:16 (middle), followed by a photo of the artist (bottom). According to midrash, when Joseph revealed himself to his brothers and told them to bring their father, Jacob, back without alarming him, the brothers had Serah, daughter of Jacob’s son, Asher, play the lyre and sing to Jacob that Joseph was alive and ruling Egypt. He was soothed by the music and believed her. Then the brothers came with all the goods they had received and told Jacob about Joseph and Jacob believed them without being alarmed.

Hilu lived on the Lower East Side and attended the First Roumanian American Congregation on Rivington Street. He served in the army in World War II, as a prison guard at the Nuremberg Trials, and in the Korean and Cold Wars. His paintings and drawings primarily feature Torah, life on the Lower East Side, and his military experiences. His art was discovered when he was 87 and featured in a number of shows. Given the extent, quality, and historic relevance of his work, it likely will continue to be a subject of extensive discussion and analysis over time. 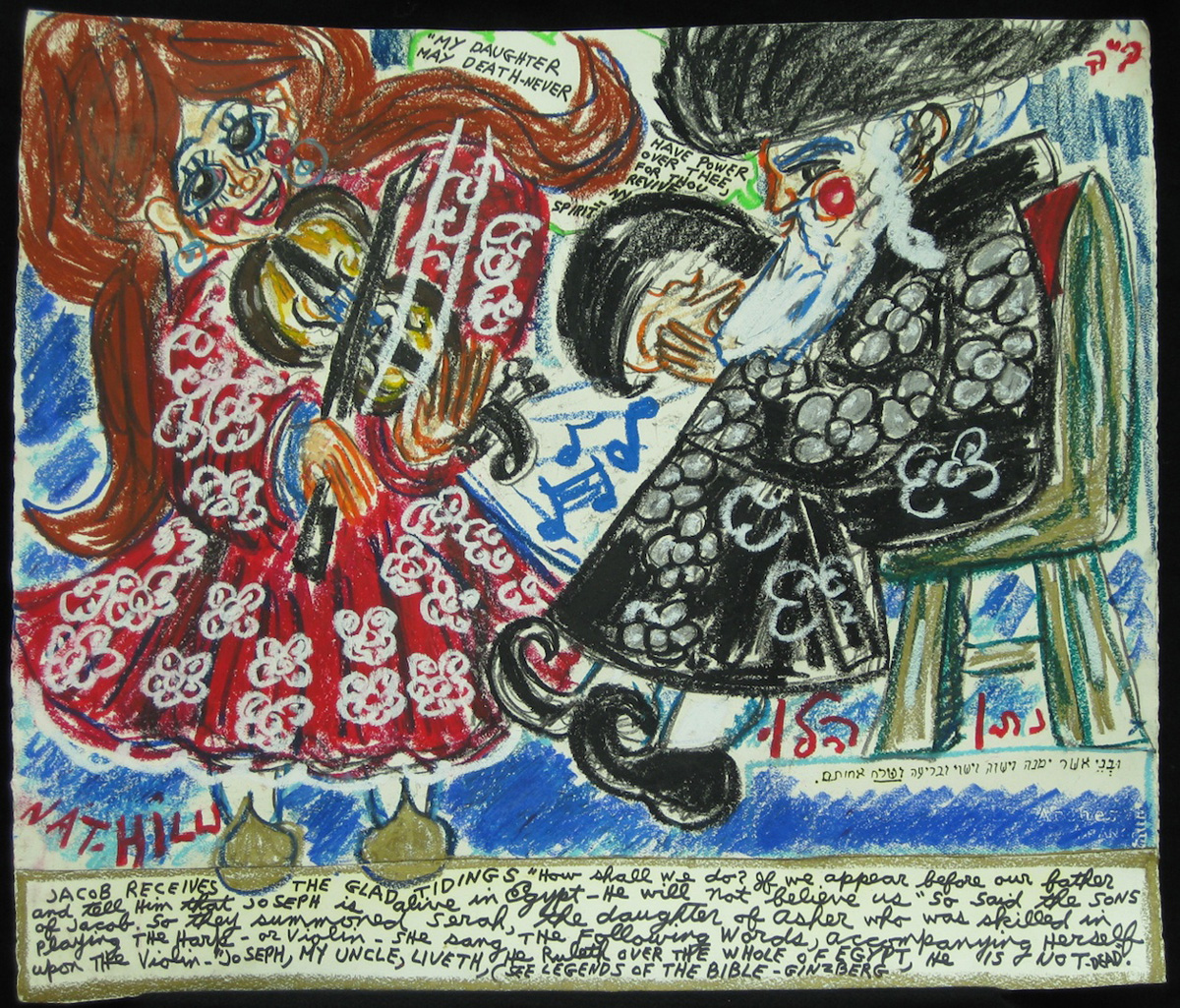 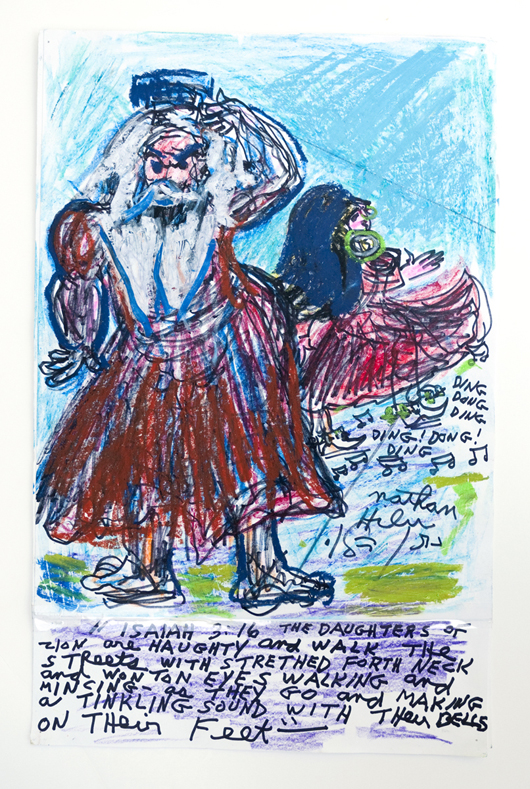 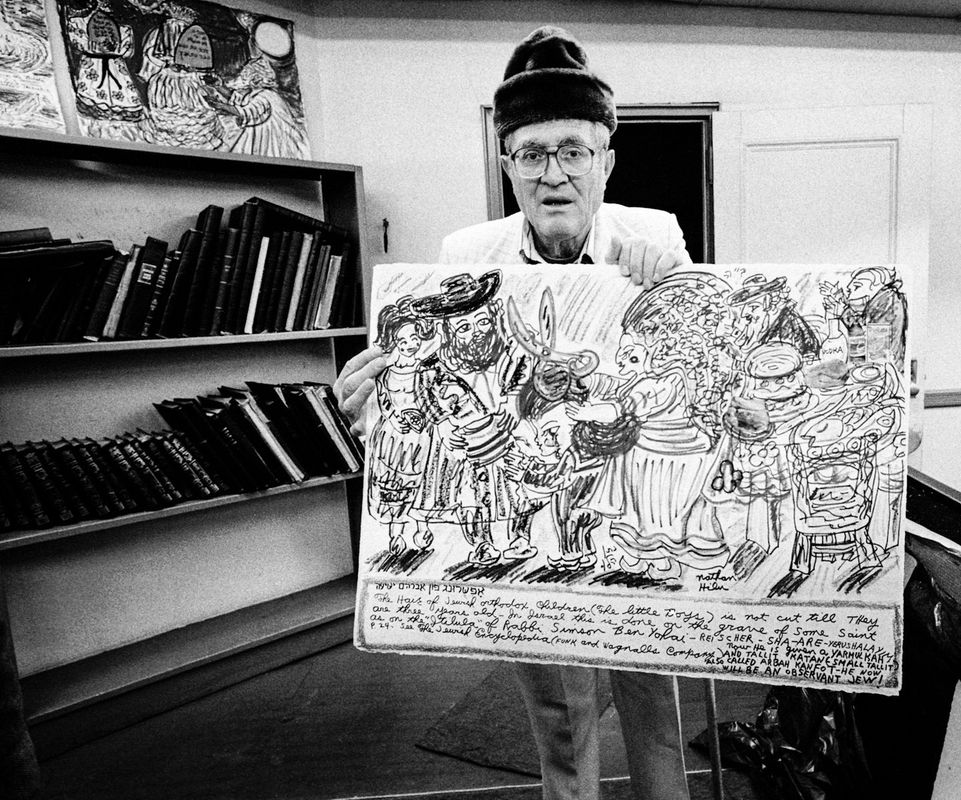