The Brothers Feast in Joseph’s House

Last week we discussed the fact that Judah was changed by the death of his two sons and, as a result, is able to gain his father, Jacob’s trust that he will do his best to bring Benjamin back. Jacob, knowing that Judah had lost two sons, likely trusts that he will take to heart the possible loss for Jacob of his favorite two sons. We discussed the steward, in response to the expressed concerns by the brothers that the silver they had paid for food was found in their sacks, telling them not to worry since the God of their fathers must have put the silver in the sacks and having Simeon brought out to them. The steward, we noted, was in on the scam so was not being truthful. The brothers, we surmised, must have been quite confused—and even more confused when they were brought into Joseph’s house, their feet were washed and their camels fed.

We noted that when they were brought in to eat, they bowed to the ground, fulfilling the dream prophecy of them bowing to their brother Joseph (although they still do not know that the vizier actually is Joseph). We discussed Joseph asking about their father’s health–which again must have confused them–and asking whether this was the youngest brother, Benjamin, about whom they had spoken—and then suddenly running out of the room into his own room) because he was overcome and needed to cry—which again must have confused them (why was this leader of Egypt inviting us to lunch, feasting us, and then running out of the room?).

Our artwork this week is from the renowned Sarajevo Haggadah, Joseph Feasting with His Brothers/The Silver Goblet (above), and Joseph the Provider/The Brothers Bowing (below). The Sarajevo Haggadah, despite its name, was produced for a prominent Jewish family in Barcelona, Spain, in 1340 CE presumably by a Jewish artist. The Haggadah has three parts, a series of 69 illuminated illustrations of Torah beginning with Genesis, the Haggadah text itself with beautiful lettering and decoration, and poetry by some of the best Medieval poets. Nearly a quarter of the Torah illustrations focus on the Joseph cycle, perhaps because the sometimes difficult situation for Jewish leaders in Spain made the Joseph story especially relevant to their time. The Haggadah gets its name because it is now located in Sarajevo, Bosnia. How it got there is an amazing story for another message. 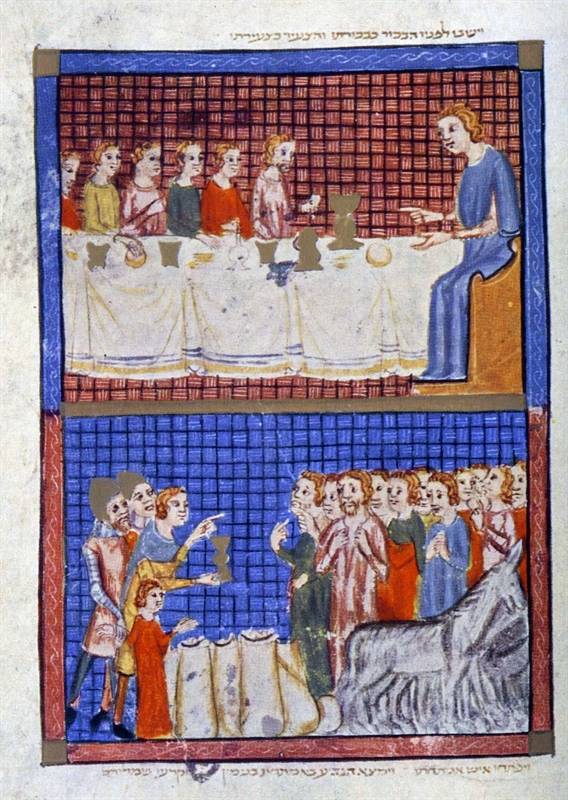 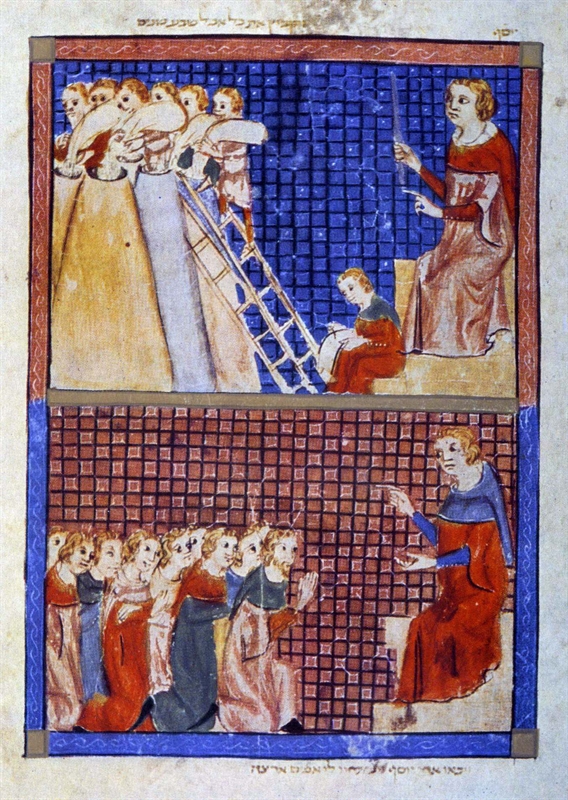