Judah Offers Himself in Benjamin’s Place

Last week we discussed Judah retelling the story of the brothers being sent home to get their brother, Benjamin, and bring him back to Pharaoh’s vizier (who actually is Joseph) and Jacob saying that they would send his white head down to Sheol in sorrow if they came back without Benjamin given that he had two sons and one was killed by a beast (since Jacob thinks Joseph was killed in that way). We noted that he has more than two sons! And is still favoring Rachel’s sons over the others. We noted Judah offering himself as a slave in the place of Benjamin, thus fulfilling his pledge to Jacob, his father, that he would sacrifice himself for Benjamin. We had different opinions of Judah, some thinking he has matured due to his own losses and some thinking he is more strategic. We discussed Joseph once again having to leave the room due to his emotions and, this time, sobbing so loud the Egyptians could hear. We discussed why—basically, because Jacob missed him so and because Judah was stepping up.

This week’s art is more work by Los Angeles Jewish artist, Ruth Weisberg (1942- ), Vayigash (above), and Separating the Waters III (below). Weisberg was Dean of the Roski School of Art and Design at USC and is the Director of the USC Initiative for Israeli Arts and Humanities. She is a feminist artist and was the first artist featured at The Women’s Building in Los Angeles. She has exhibited in over sixty major museums. Vayigash is colored pencil on parchment and features Joseph and Jacob embracing. “I experience this as one of the most moving and profoundly human moments in the Torah,” Weisberg says. 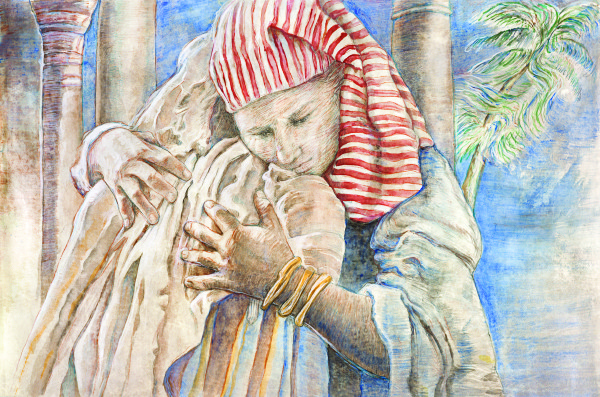 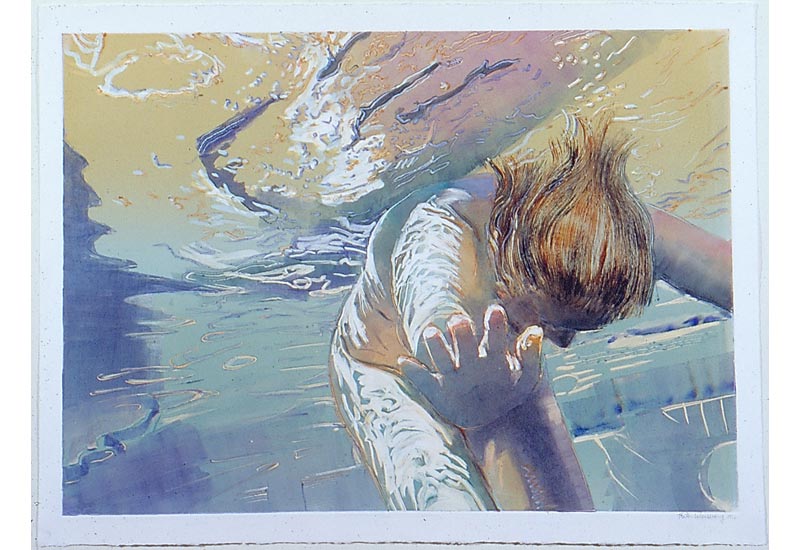 « The Silver Cup in Benjamin’s Bag » Joseph Reveals Himself