We started with a short discussion of last week’s session. Question – why retell the whole story of the brothers going back to Canaan and what they told their father? Our answer was that this recounting shows Judah stepping up, being honest, and taking responsibility. He takes the lead, fulfilling his pledge to his father. We also noted that by calling Benjamin a “na’ar/youth” Judah is offering himself as a more useful slave than Benjamin would have been.

Starting with 45:4, when Joseph reveals himself to his brothers, he emphasizes that he was sold into slavery and that the “torn by a beast” story is over. This is a reckoning and Joseph is “guilt-tripping” his brothers. He could have simply said, “I am Joseph”, without mentioning the “the one you sold into Egypt.” The next line repeats the word “sold”, and asserts God was using him as part of a plan. (We mentioned that this is a reversion to the youthful Joseph and his dreams of dominance.)

The Joseph story functions as a link to the Exodus story, which is the paradigm of Judaism. The old JPS says that Jews are “eternally Egypt” – eternally wandering, eternally marching through a narrow place/wilderness to find the Promised Land. Egypt is our first permanent diaspora. Since Israel is now a state, this paradigm has become more complicated. Rabbi Sara pointed out that the Joseph story is a diasporic text and might in fact have been written in Egypt. All the major rivers and other geographic places are assumed and not named; in the same way North American Jews are assumed to know the geography of New York City.

Line 8 shows how powerful Joseph was. All three descriptions of himself (father of Pharoah, lord of his household, ruler over the whole land of Egypt) intensify his power and total authority. In line 9 he uses very abrupt language, asserting his primacy and telling his brothers to get back home and tell their father to come to Egypt without delay. He assumes he will be obeyed; he is now essentially the patriarch. We pointed out that the brothers will have to own up to the fact that they sold Joseph, and that the “torn by a beast” story was a lie. We also noted that Joseph’s youthful dreams are coming true, and that the land he offered them, Goshen, was exceedingly good land, and near enough for him to watch over his family.

In line 10 we discussed the chutzpah of just telling your parent to leave his home. Apparently, the JPS translation of line 11 is just plain wrong. In fact, the text is in clear contractual language – “if you don’t come to Egypt, you will suffer privation.” We also noted that the brothers had a choice; they could make up another story for their father and not come back to Egypt at all, or they could admit their crime to Jacob. We noted that the brothers would be sure that Joseph was indeed who he said he was because he was speaking Hebrew. We also noticed that in line 13 Joseph couldn’t resist his old boasting ways by repeating that they must tell their father about his “high station”.

In line 14 Joseph embraces his brother Benjamin and weeps. We remembered that Benjamin was Joseph’s only full brother. The other brothers were his half-brothers. The fact that the brothers had not victimized Benjamin and in fact were willing to defend him finally led Joseph to kiss and weep over his brothers, the ones who had sold him into slavery. Only then were they able to speak. We pointed out that Joseph could easily have abandoned his brothers. They were totally dependent on him.

In line 16 the Pharoah and his courtiers were pleased that Joseph’s brothers had come. This is a clue as to how great and famous Joseph was. Rabbi Sara noted how “deeply weird” it is to have a “good guy” Pharoah in the Torah. This is very different from other parts of the Torah in which Pharoah = wicked. We talked about how Abravanel had been the king’s treasurer in both Portugal and Spain and then lost everything and was kicked out of both countries, so he would have understood the dynamics in this story firsthand.

We discussed “wild” midrash and how every religion has its own “weird” stories, but we tend not to recognize strangeness in our own beliefs, only in other religions not our own. Jews have their own “magical” stories and traditions.

Finally, we got back to lines 17-20, showing that Joseph has such a direct line to Pharoah that he knew what Pharoah would do even before he did it (i.e., invite Joseph’s whole family to dwell in Egypt.) In fact, Pharoah goes a step farther than Joseph, offering not just a place to live but also all the goods they will need as well. The theme of “land, wealth, and progeny” continues here as the Jews prepare to go down to Egypt to preserve these three things. 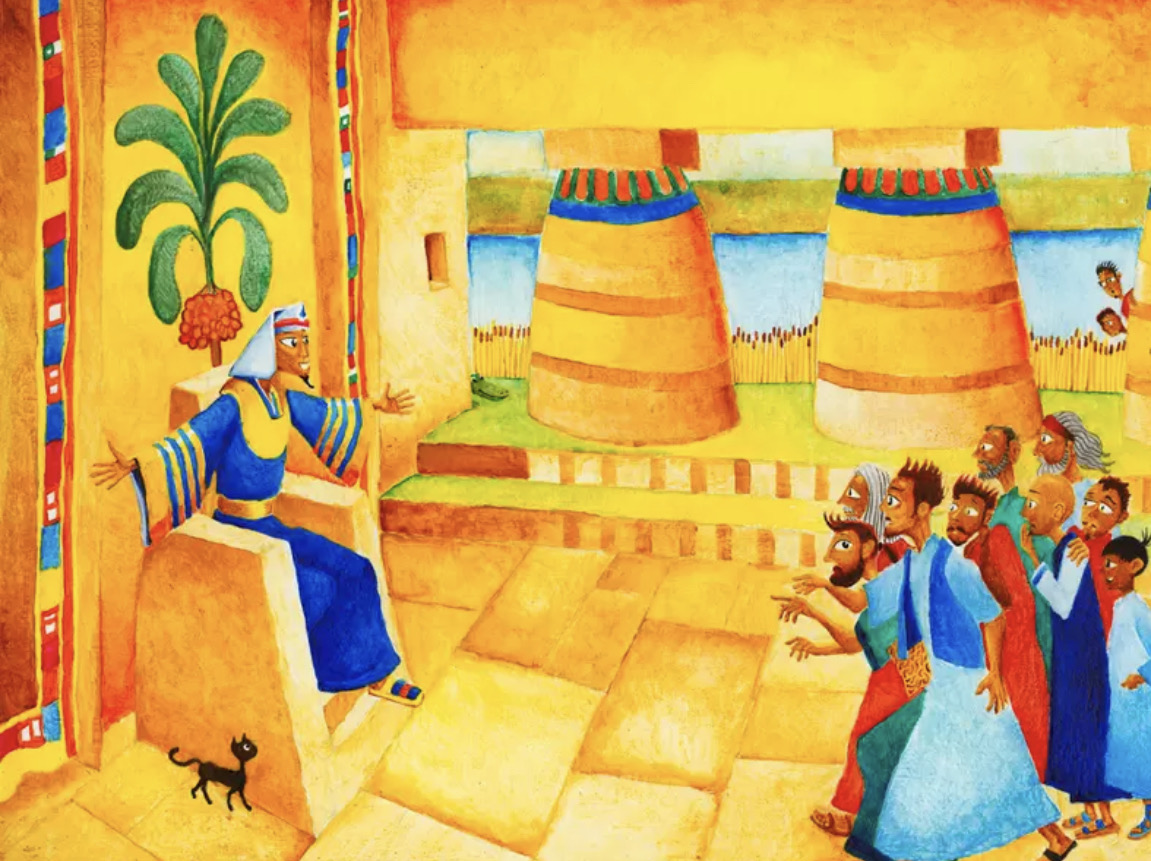 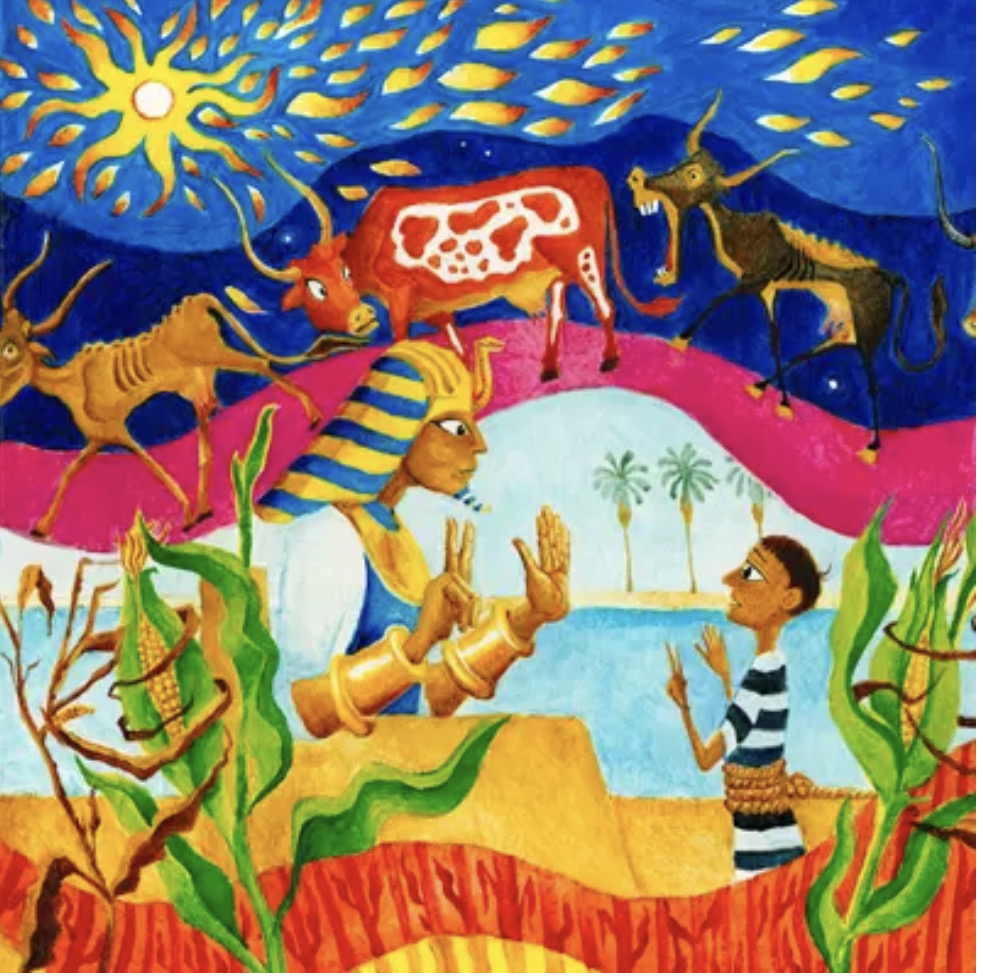