Last week we discussed the brothers getting ready to go home and bring their father, Jacob, back to Joseph in Egypt and wondered whether they were following Joseph’s instructions because they trusted him or because they were desperate (they might wonder if he would take revenge on them for what they did to him in the past). We noted the continuing favoritism of Benjamin (Joseph gave the other brothers only a change of clothing but gave Benjamin five changes of clothing and 300 weights of silver) and considered if he was being treated as special, was being made a target, or whether Joseph might have thought he could more easily persuade Jacob to return.

We discussed Joseph telling the brothers not to תִּרְגְּז֖וּ on the journey and noted the varying translations of the term: quarrel (about whose fault it was that they had sold him), fall out (similar), be nervous or afraid (about bandits on the way), be perturbed (since the word means to quake or to shake either physically or emotionally and is the antonym of being tranquil or at peace—which would mean he was reassuring them that he intended no harm to them, i.e. reassuring them that they could trust him as we discussed above and that he was not leading them into a trap).

We discussed the brothers telling Jacob that Joseph was still alive and that he was the ruler of all of Egypt! We noted Jacob’s going from being numbed after he heard that to reviving. Translators say “his heart stopped,” “went numb,” “fainted” because he did not believe them and, then, after the brothers told him the words of Joseph and he saw the wagons Joseph had sent, his spirit revived. We discussed this strong man, Jacob, and how frail he was at this point in his life that he basically fainted on hearing the news—and how we have seen his development over the whole course of his life.

We discussed Jacob, called “Israel,” saying רַ֛ב (Rav!) meaning “enough” or “a lot,” and saying Joseph is still alive so let me go see him before I die. We noted that they go but they go out of their way to Beersheva first rather than going directly to Egypt. Why Beersheva, we wondered? He offered sacrifices there to “the God of his father, Isaac.” The text wants us to recall the previous happenings at Beersheva—Abraham made the covenant with Abimelech there (Genesis 21), Isaac built an altar there (Genesis 26:23-33), and Jacob put a rock under his head and dreamed of angels on a staircase there (Genesis 28:10–15 and 46:1–7).

We noted God saying to Israel through visions in the night, “Jacob, Jacob” and him replying, הִנֵּֽנִי (Hineni! Here I am!), a pattern found previously with Abraham when he was about to sacrifice Isaac and to be found with Moses at the burning bush. We noted God saying not to be afraid because I myself will go with you to Egypt—and make you a great nation there–and bring you back up as well. We noted that gods at that time were local and that this is the first time God leaves a locality, an important development of the idea of God. God is god not just at that place but everywhere is the suggestion, making the beginning of chapter 46 a central section on the evolution of the idea of God. We noted that Jacob “got up and went” just like Abraham “got up and went” and that they all went to Egypt (and that the women are mentioned—who have not been mentioned for quite a while). We noted, also, the first use of the phrase “children of Israel” (b’nai yisrael).

Along the way, we noted the phrase “by the mouth of Pharaoh” meaning “by Pharaoh’s direction or command” and reviewed the fact that body parts are referred to a lot in the Hebrew and are not always translated as such; that the patriarchal narrative and the Egypt narrative are bridged by the Joseph story; that evidence for the later composition of the Joseph story as a bridge is that Joseph is mentioned only once in Exodus (at the very beginning) and that the tribes are Ephraim and Menassah; and that sometimes you have to leave the land in order to grow—which is a good thing since we have had to “leave the land” a lot in our history—and that diaspora made us into one ethnic group. We also discussed the midrash that imagines the brothers have Serach, daughter of Jacob’s son, Asher, tell Jacob that Joseph was still alive and ruling Egypt and do it by playing the lyre and singing so that Jacob would not be alarmed on hearing the unexpected news.

Our artwork this week is by architect Harry Hurwit (1888-1963), his representations of the twelve tribes in the enframement of the doorway of the Bialystoker Home for the Aged built in 1929-31. The home was located on East Broadway on the Lower East Side of Manhattan during a period in which that neighborhood contained the world’s largest Jewish community.

The home was created by the Bialystok landsmanschaft (immigrant hometown mutual aid organization) and is in the Moorish Art Deco style. Above is a roundel featuring the tribes of Ephraim–represented as a bull–and Menassah–portrayed as a wild ox–the first two sons of Joseph and Asenath. Below are “Bialystoker” in English lettering rendered to look like Hebrew and four more of the tribes, Issachar, represented as a camel, Zebulin as a Phoenician ship, Dan as a snake, and Naphthali as a stag. Hurwit first saw Beaux-Arts architecture in France while serving in the army in World War I. On his return home, he abandoned his former work at the family insurance company and studied art and architecture at Cooper Union in New York. 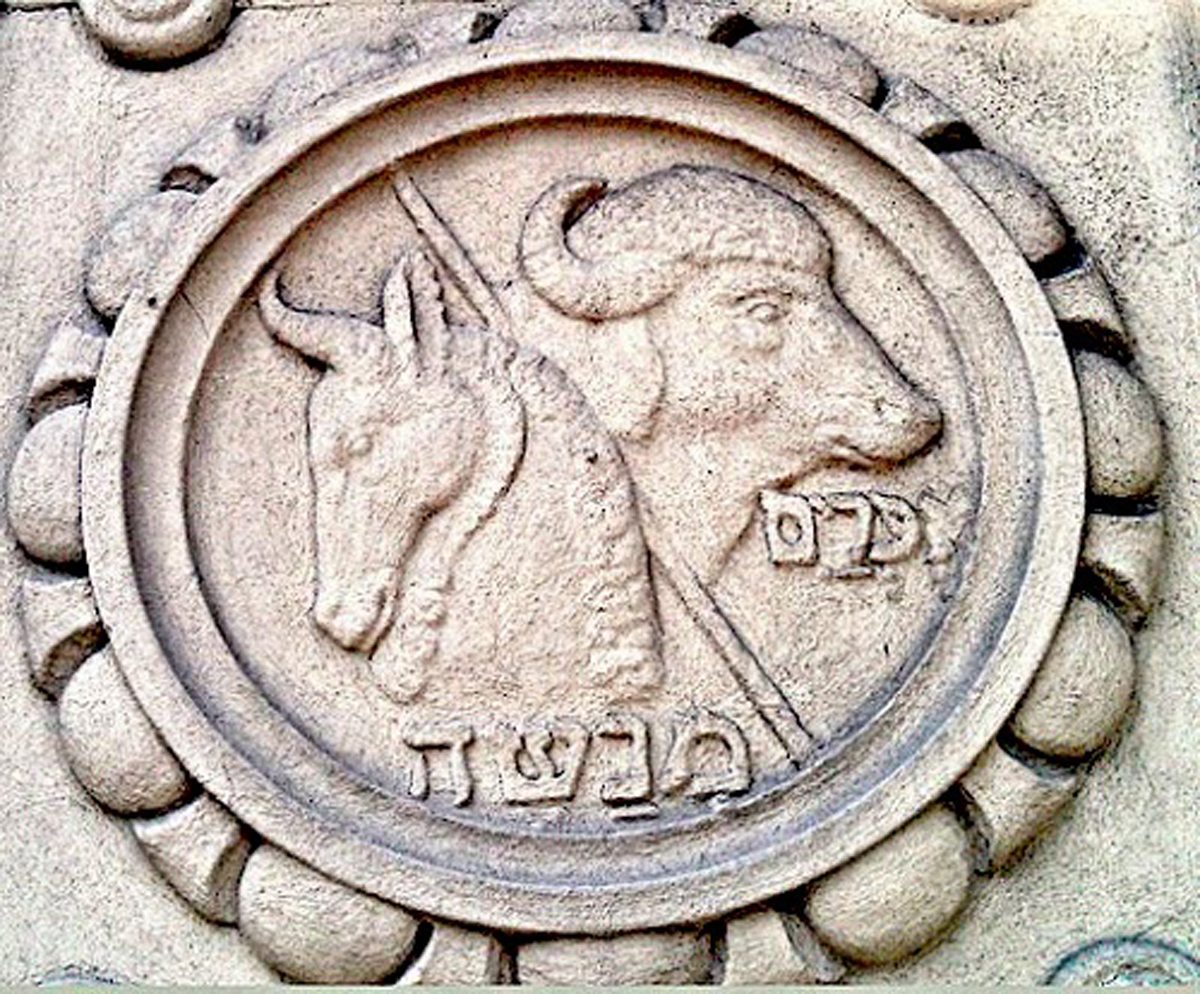 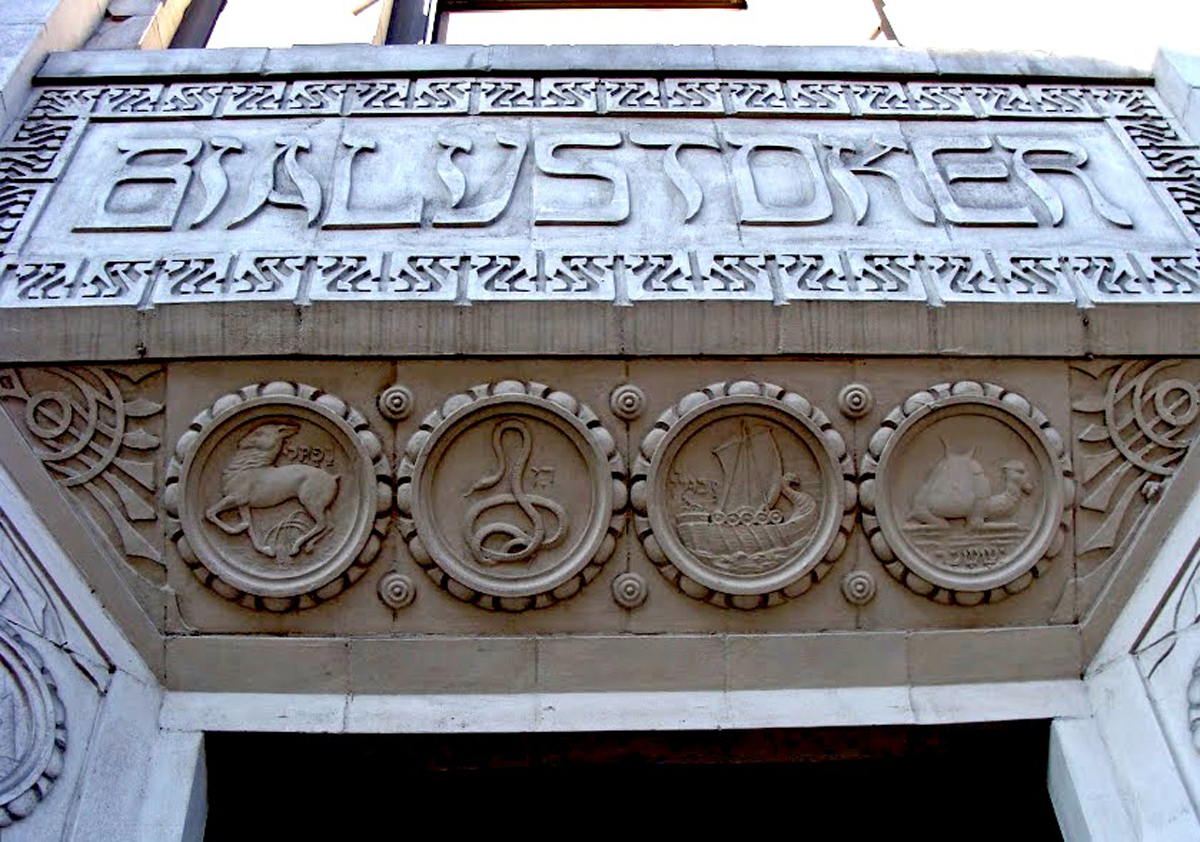