Last week we started with additional comments about the previous week’s readings, namely, that three possible reasons for Joseph asking permission to go up and bury his father are that he needed protection on the trip, that he was being respectful, and/or that he was assuring Pharaoh that he would return. We then added comments on the unusual name “Goren ha-Atad,” noting that “Atad” contains an “aleph” and a “tet” where we would have expected an “ayin” and a “tav” (indicating a borrowed word).

Regarding last week’s reading, we discussed Joseph’s brothers, after burying Jacob, being afraid Joseph might despise them and pay them back for the wrong they had done him and the brothers saying Jacob had commanded Joseph to bear the brothers’ offense and sin against him. We noted that Jacob had not commanded that. We noted Joseph weeping when he heard what they said and thought it might be because the brothers were admitting their wrongs against him.

We discussed the brothers falling in front of Joseph, saying they were his as slaves and Joseph telling them in response not to be afraid because “am I in God’s place?” He also drew a contrast between them saying they had done bad against Joseph while God thought it was for good. We discussed the interpretation that Joseph meant that all that the brothers had done was part of God’s plan, a plan that was for good because it rescued the Israelites from the famine. Such an interpretation is different than the interpretation that Joseph’s statement was an expression of humility (for Joseph to make another a slave would be to act as though he were God, that is, to enslave another is idolatry so a humble person would not do it). Joseph and his father’s house lived in Egypt and Joseph lived 110 years. We noted that the length of years indicates stature and that Joseph lived almost as long as Moses.

We observed that there appear to be two traditions in the story, one in verses 15 through 17 and one in 18 through 21 (one in which they claim Jacob commanded Joseph to bear the brothers’ sin and one in which they offer to be slaves; if he bore the sin, they would not have to be slaves, so there appear to be two different accounts). We noted Joseph, when he was dying, saying that God would take notice of them and wondered whether God instead always takes note of everyone. We concluded that the text here does not think that and so does not take God to be omniscient.

We also discussed some grammatical features of Hebrew: the interrogative ‘he’; intensification through repetition (and noted an African-American vernacular parallel, “I done did that”); and the large “mem” on “shileshim” was noted by the Portolaver Hasid (who then covered his head).

Our artwork this week is from the tempura wall paintings found in the Dura Europos Synagogue, King of Egypt in the Story of Joseph (above), and Pharaoh’s Daughter Finds Moses (below). The Dura Europos Synagogue, discovered in 1932, was one of the world’s oldest existing synagogues. It does not exist today because it was destroyed by ISIS in 2013. Happily, the murals had been preserved and are located in the National Museum of Damascus. The discovery of the synagogue ruins and the paintings, as well as tiles, led scholars to revise the then-common view that the decoration of synagogues with art was always prohibited in Judaism. The tempura below shows Pharaoh’s daughter (commonly referred to as Batya or “daughter of YHVH”) finding Moses in the rushes of the Nile and handing him to two other women, possibly Yocheved, Moses’ mother, and Miriam, his sister. Note that the object in the Nile looks more like an ark than a basket presumably because the Hebrew word for it can mean basket or can mean ark (and is the same word that is used for Noah’s ark). The tempura above shows the Egyptian king (the new king who did not know Joseph) sitting on his throne ordering Shifra and Puah to kill first-born Israelites as well as Moses’ mother putting him in the ark into the Nile. 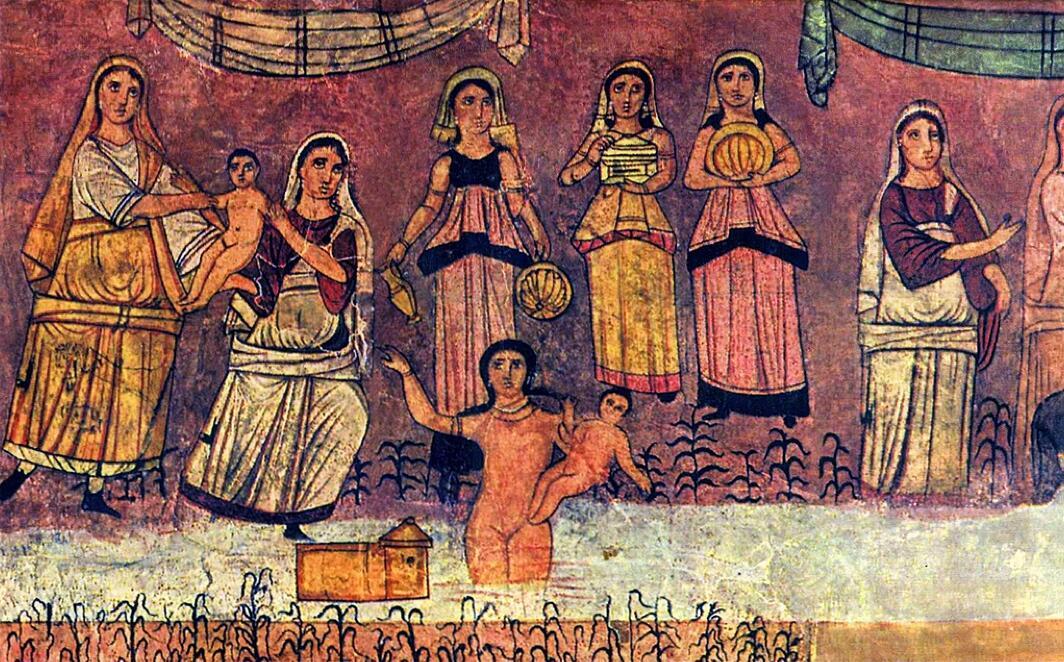