Recently we discussed the rare shalshelet trope mark found at Genesis 19:16 over the word translated as “and he delayed.” The trope indicates psychological or moral hesitancy to act.

Last week we finished discussing the flight out of Sodom and began discussing Lot’s daughters’ intercourse with Lot. We discussed why Lot might not have wanted to flee to the mountain and what he might mean by “in case the bad thing might cling to me and I’ll die” in the mountains while Zoar is small (that Lot seems to be arguing with YHVH hoping YHVH might be willing to spare a small place from the destruction), that YHVH agrees not to overturn the small city, that hafach, “to overturn” is used several times in the discussion (and that a special Israeli type of latté is called ‘café hafuch’ or ‘upside-down coffee’), that Lot went to Zoar and that YHVH rained sulfurous fire on Sodom and Gomorrah and overturned those cities, all those residing in the cities and all the growth on the ground.

We discussed Lot’s wife looking back and becoming a pillar of salt: that she has been criticized for being disobedient but that we might find more sympathetic interpretations such as the midrashic one that she looked back to see if her two daughters who were in town might be coming to flee, saw the shekhinah and perished (also portrayed by painter Janet Shafner in her portrayal of Lot’s daughters), that even if it is important to let go of the past to go into the future still it is important to remember the past, etc., that the text says “looked behind him” not simply “looked back,” that Abraham then went back to the place where he had been standing and looked out over Sodom, Gomorrah and the plain and saw the smoke going up like the smoke of a furnace, that Abraham probably didn’t know that Lot and his family were spared.

We went on to discuss Lot going up from Zoar to the mountain because he feared to live in Zoar (and puzzled over the fact that he was afraid of the mountains so went to Zoar but then was afraid of Zoar and went to the mountain), that he lived in a cave with his two daughters who thought no other man existed on earth after the overturning, that the older tells the younger that they should ply their father with wine and have sex with him, since he was old, in order that his seed might live (and that many interpreters see what happened as perversion but that there are more positive interpretations such as that since offspring were one of the three most important goals of a patriarch–along with land and wealth–the daughters might be thought of not as perverted but as doing what was needed to achieve the goal and also that from the line produced by the incestuous intercourse line comes Ruth–through Moab–and, through her, King David from whom the messiah would come) and that the two offspring of the incestuous intercourse were Moab and Ben-Ami and that it is notable that there happened to be wine in their cave.

This week’s artwork is by Connecticut Jewish artist, Alan Falk (1945- ), “Lot and His Daughters” (above) and “Sin Couches at the Door (Cain and Abel)” (below). Click on the link to see Falk’s interesting account of his painting’s approach to the story of the intercourse between the daughters and Lot. Falk is originally from England and moved to the U.S. in 1974. 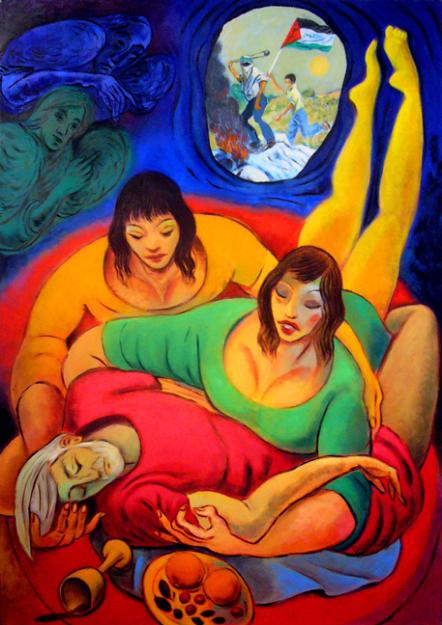 Lot and His Daughters (Alan Falk) 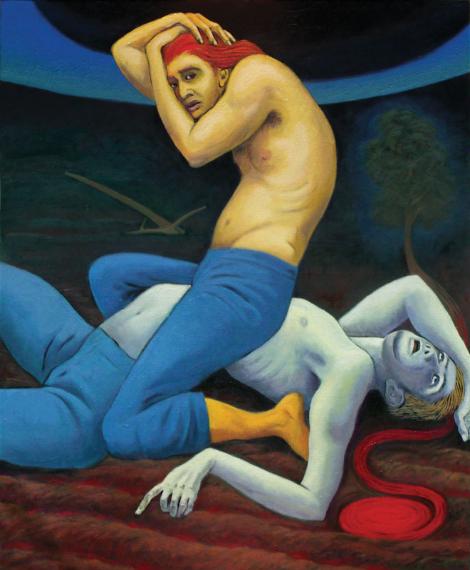 Sin Couches at the Door (Cain and Abel) (Alan Falk)

« Leaving Sodom: The Difficulty of Facing Up to Evil » Abraham, Sarah and Abimelek