Last week we discussed Isaac growing and being weaned and Abraham making a big feast for him on the day of his weaning, that it might have been traditional in the region to do so, and that weaning might be the sign that the child would survive. We discussed Sarah seeing Ishmael, “the son of Hagar, the Egyptian, whom she had borne to Abraham,” playing and Sarah’s reaction to this of telling Abraham to drive “this maid” out with her son so that her son would not inherit with Sarah’s son, Isaac. We discussed a wide range of interpretations of the incident from the simple idea that Ishmael was playing to the idea that he was antagonizing Isaac (“playing with him” in the negative sense or “making sport” or “making fun of him”), to the idea of sexual play and the idea of worshipping idols that we thought were less plausible. We discussed the fact that Sarah may simply not have wanted Ishmael to inherit with her son and that she might have been frustrated that, after all she had gone through, she is given a son when she’s old and he might have to compete for an inheritance.

We discussed Abraham being distressed with the idea of Ishmael being driven out since it concerned a son of his and God telling him not to be distressed over the boy or the maid but to do whatever Sarah told him to do since it would be through Isaac that his offspring would be continued. We noted that Abraham clearly had become attached to his son, Ishmael, over time and did not want to lose him and that God promised that he would be a great nation since he was the offspring of Abraham. We discussed Islam later identifying with Ishmael as their forebear and there being no explicit allusion to that in the text itself, and that it made sense that they would so identify since they consider themselves to be descendant from Abraham.

Our artwork this week is more work by New York Jewish artist, Siona Benjamin (1960-), “Hagar and Sarah” (above) and “Hagar” (below). “As a Bene Israel Jew from India now living in the United States,” Benjamin says, “I am a Jewish artist creating cross-cultural and transcultural art. My perspective bridges the traditional and the modern, and sparks discourse across cultures.” 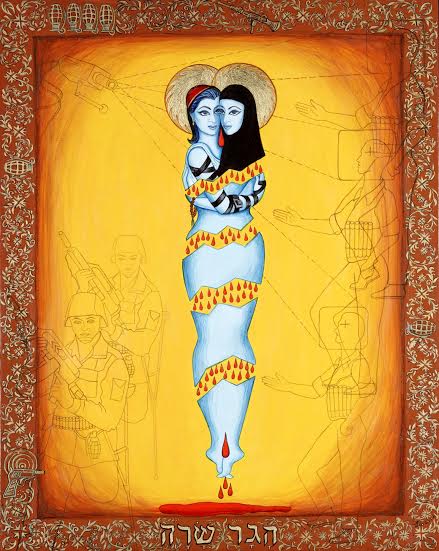