Here I Am: God Tests Abraham

Last week we discussed God testing Abraham. We noted that God calling Abraham by name indicates something important is about to happen and that in the Samaritan and Greek texts Abraham’s name is called twice (“And God said to him, ‘Abraham, Abraham'”) making the importance even more evident. We discussed Abraham saying, in response, “Hineni” (“Here I am” or “I’m here”), that “Hineni” is a combination of “Hinei” (“here” or “behold”) and “Ani” (“I”) and that it indicates being ready, responsive or attentive.

We discussed the possibility of a different interpretation of what Abraham is asked to do (is it to go up to the land of Moriah and offer Isaac as a sacrifice or is it to go up there and make Isaac another one who goes up) with the idea in mind that perhaps Abraham misheard the command or could have understood it differently, and we discussed why Abraham did not argue with the command as he argued with God about the destruction of Sodom and Gomorrah (some possible answers from Friedman: Abraham has an obedient personality; because Isaac is his son and so his request would be biased; the outcome in the case of Sodom and Gomorrah–that nothing was changed by Abraham’s argument–led him to stay silent in this case); we still wondered if he could not have argued with God about it.

We discussed “early next morning” indicating that Abraham was, in fact, responsive and ready since he got going right away, what the wood would be for if not for a sacrifice (to keep warm?), Abraham saying to the two servants who went with them to stay there with the ass and that he and Isaac would worship and return to them (was it a sign that he had faith–but ‘faith’ is not a concept in these passages and, in general, is stressed a great deal in Protestant Christianity and relatively little in Judaism and Jewish texts; was he sparing Isaac’s feelings; did he not want the servants to know what he was doing), that Abraham “put the wood on his son Isaac” an emotionally fraught thing to do since it indicates how burdened Isaac is, and that “the two walked off together” makes the pathos even greater since it hints at the close connection between the two of them. We also discussed what exactly the test of Abraham was since it would not be a test of faith on a Jewish interpretation (as it is thought to be by some Christian thinkers). Could God be testing Abraham’s obedience? Or could God be hoping Abraham would refuse to obey?

Our artwork this week is by New York City Jewish artist, Eden Morris, Sarah’s Nightmare (above) and Collateral Damage (below), and shows the effect of the almost sacrifice of Isaac on Sarah. Morris studied painting at Brandeis University and Boston University. Her work tends to be about relationships and often tells a story from the women’s point of view. 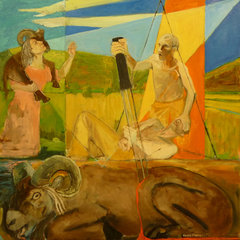 « Hagar and Ishmael’s Departure, Abraham’s Pact with Abimelech » Wrestling with the Akedah