We had another fascinating Torah study last week, full of ideas and information. We discussed the record of generations from Abraham through Isaac competing with the previously given record of the generations coming from Ishmael and that the generations coming through Isaac were emphasized by their placement at the beginning of Parashat Toledot (Generations). This led to a discussion of the fact that parashot divide Torah differently than chapters and verses do. Parashot, we learned, are part of the Masoretic tradition (7th to 10th c. CE). The version of parashot used by Jews around the world today stems from the list of them given by medieval Jewish scholar and philosopher, Maimonides, in his code of Jewish law, the Mishneh Torah (12th century CE). He based them on the Aleppo Codex (Tiberias, 10th century CE), a medieval bound manuscript of Torah.

We discussed Isaac prevailing on YHVH because Rebecca, Isaac’s wife, was infertile, YHVH being prevailed upon, and Rebecca becoming pregnant. We discussed the two struggling inside her, Rebecca feeling the pain of that struggle and wondering why she exists (“If it’s like this, why do I exist?”) and going to inquire of YHVH. We discussed the fact that YHVH responds by speaking directly to her (before ever speaking to Isaac) and that his response is poetic, telling her that two nations are inside her, one of which will be mightier than the other, and that “the older the younger will serve” (and that the ambiguity of the statement, not making it clear whether the younger would serve the older or vice versa, was pointed out to Richard Elliott Friedman by Dead Sea Scrolls scholar, David Noel Friedman). We discussed other reasons why it would be hard to tell who will rule, for example, because it’s hard to tell who of twins comes out first in general and also that the time given for a birth often is not really exact.

Rebecca bore twins, we read, and one, Esau, came out red, like a hairy robe, from which he got his name (from the similarity of his name with the word for hair or, possibly, from the word that means to make and might here mean fully made or, possibly, a miracle) while the other, Jacob, came out holding Esau’s heel (hence his name, “Heel”). We discussed whether grabbing the heel implies usurpation or, to the contrary, could imply connection between Jacob and Esau (not conflict).

We discussed Rebecca’s twenty years of childlessness, that she was around 35 when she bore the twins, and that the Jacob story may be a graft.

Finally, we discussed Esau as a skilled, clever or knowledgeable hunter and Jacob a simple, pure or complete man who lived in tents and that this distinction between them—perhaps between cleverness and simplicity or purity—suggests Torah, or at least part of Torah, has a preference for simplicity.

Our artwork this week is by Harriet Finck, New Jersey Jewish artist–Jacob’s Dream (above), illustrating his dream of angels, and One Thing I Have Asked (below), inspired by Psalm 27:4 (which is about being in the presence of YHVH and is often sung on the High Holidays). I may be wrong, but I think I see arrows from the heavens in the first and Harriet herself in the second, surrounded by nature–composing and decomposing—thus providing her with YHVH’s presence. 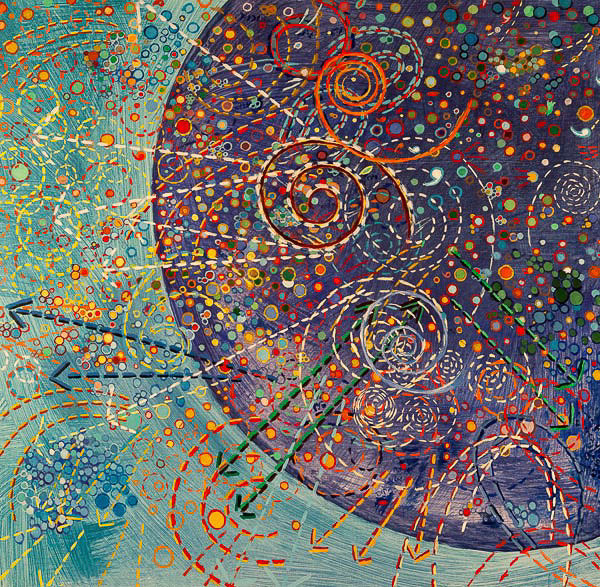 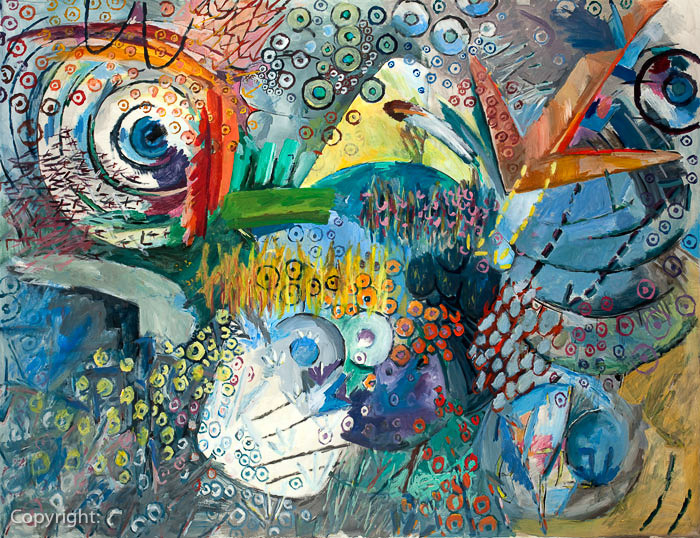 One Thing I Have Asked (Harriet Finck)