Does Isaac Recognize Jacob? Is Lying Ever OK?

Last week we discussed whether Isaac really did not recognize Jacob. Some of the reasons we gave for thinking he did recognize him were that a father would distinguish the voice of one son and not confuse it with the voice of the other, that Isaac’s sight was going dim so that his ability to recognize voices would have gotten stronger to compensate, that Isaac asks his son how he managed to get the game so quickly (when, in fact, he did not hunt game quickly but simply selected two kids out of the already present herd), that Isaac is aware that there is a contrast between the voice which is Jacob’s and the arms which are hairy like Esau’s, that fur on arms is not much like hair on arms, that Isaac keeps asking questions such as “are you really my son Esau?”

We discussed Rebecca’s role in Jacob getting the blessing and noted that some commentators think she deceived Isaac about who he was blessing because she realized/believed that Esau would not make a good heir and leader of the people, that some medieval commentators try to explain away Jacob lying and saying “I am Esau, your first-born” and have him saying, instead, something such as “I am (bringing this to you and) Esau (is) your first-born” while others say there is no shame for a righteous person to lie in such a case since Esau was not deserving of the blessing.

This led us to discuss lying. We seemed to agree that lying is ok in certain circumstances such as if someone ugly said how do I look and the person asked did not want to hurt the other person by saying, you look really ugly. We wondered about lying in Judaism, whether it is allowed, not allowed or allowed in certain circumstances. We remembered both Abraham and Isaac lying and saying their wife was not their wife but their sister, we remembered the (later) prohibition on bearing false witness but also various later passages that more directly prohibit lying and found that the Talmud prohibits lying but lists exceptions to the prohibition such as lying about hospitality received to protect the host. We wondered if that might be an appropriate position on lying—to oppose it in general but not in all types of situations (and realized a full account of the view of lying in Judaism would be a lengthy one). Another exception is lying to save a life (which involves favoring one Jewish principle over another when the two conflict).

Our artwork this week is by Canadian Jewish painter, Sheila Nemtin, from Montreal, Toldot (above) and Vayeira (below). The paintings are part of a painting-and-blog series on each Parsha (Torah portion). Click on the links to read her blog on the two portions—that is, her midrash on them. In Toldot, she takes Jacob and Esau to be two parts of a whole: “Together, Jacob and Esau are an ‘ideal’ man: comfortable in the natural world and competent in the domestic sphere, connected to both father and mother.” 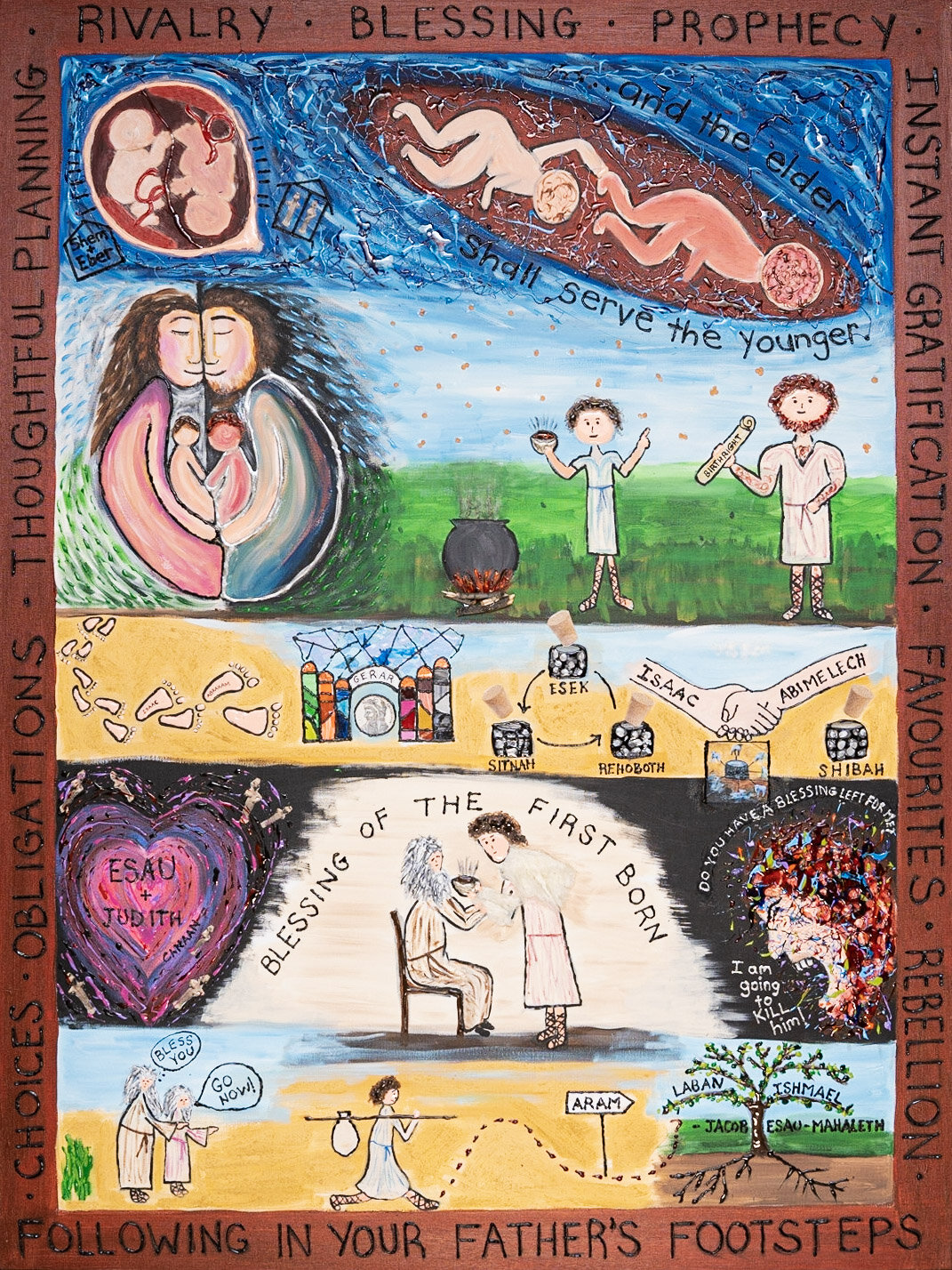 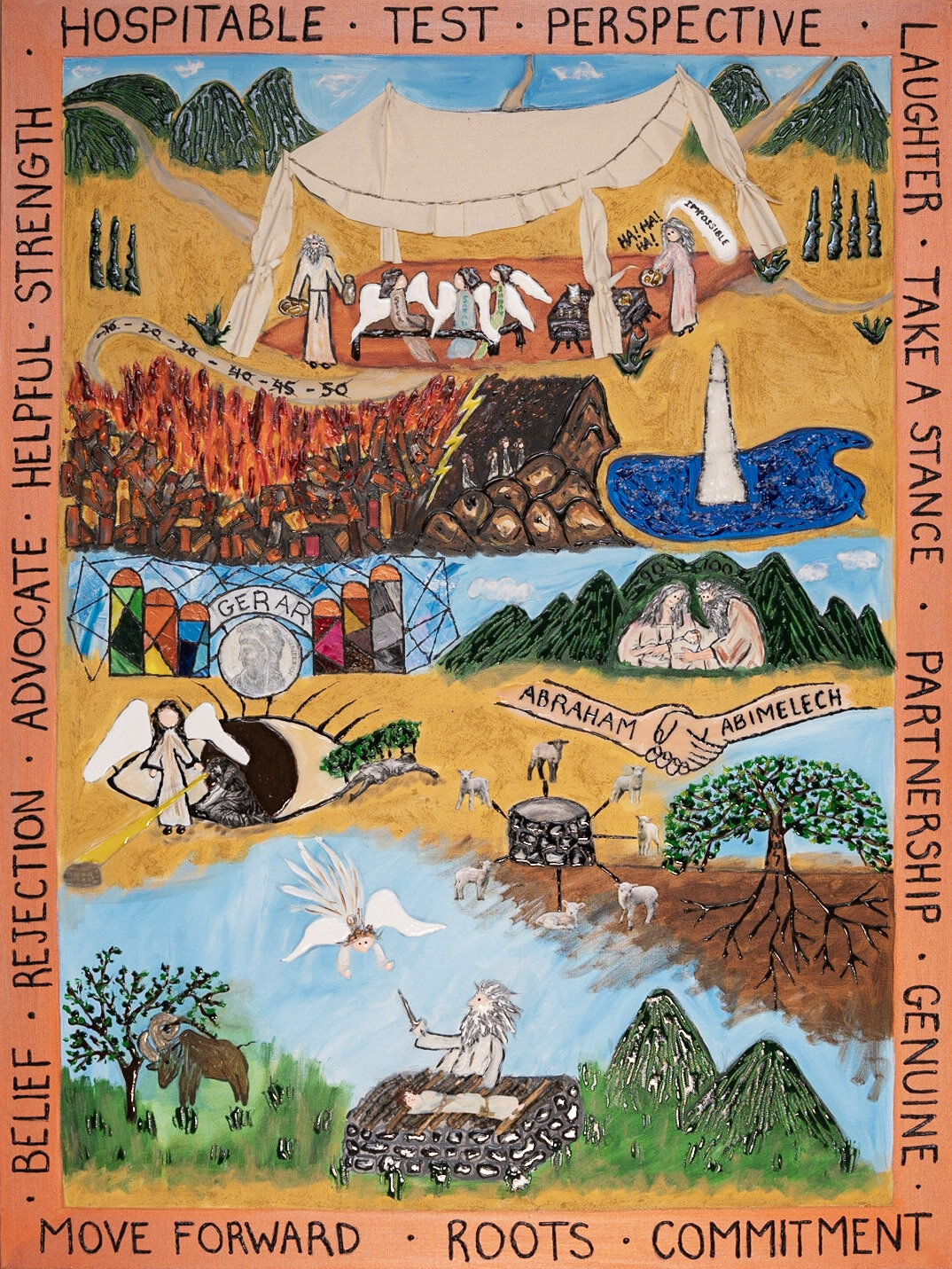 « Isaac Blessing His Son » Esau Wants a Blessing, Too