Last week we continued to discuss Jacob’s scheme for ensuring that he gets the pay he deserves from Laban, the speckled-and-spotted-goat/brown-lamb scheme, in which he would only keep the latter from among the flock, that his righteousness or honesty would testify for him (in other words, that he would have to be righteous/honest, because any white ones in his flock would obviously be stolen), that the word for white is a pun on Laban’s name, that Laban agreed but then took all the ones that were not pure white-out and gave them to his sons who put three days’ distance between them and Jacob (either to make sure that there would only be white ones so that he would not have to pay Jacob or so that the ones that were not pure white would not breed more).

We discussed the three parts of Jacob’s next scheme: first, that he took rods and stripped them of their bark so that they were white and put them in the channels of the watering troughs so that when the flocks came to drink and copulate there, they gave birth to streaked, speckled and spotted ones (because what they looked at during copulation determined what they would turn out like) and, second, that he had the flock face the streaked and spotted ones so that that is what would be born and, third, that he put rods only in troughs for stronger sheep so that the sheep born pure white—the ones Laban kept—would be weak.

We discussed Jacob as a trickster and that he was tricking a trickster since Laban tricked him out of years of labor, we discussed that Jacob was there more than fourteen years with Laban, that we might consider him justified in tricking Laban since Laban tricked him into the work but that also, as Richard Elliott Friedman has discussed, Laban tricking Jacob was Torah’s payback for Jacob tricking Esau, so that the cycle would go on because each side is tricking the other because they think the other is a trickster (as with armed people in the streets today in which each side is armed because they think the other side is armed).

We discussed how successful Jacob was (on our recurring theme of land, wealth, progeny) with many (strong) sheep, female and male servants, and camels and asses but that Laban’s sons were angry with him for taking what belonged to their father and becoming prosperous from what he got from their father and that Jacob saw that Laban’s face was not the way it was two days before, that some translations make ‘face’ more abstract but that Torah generally more concrete, rendering what we might think of as internal traits as external ones, that the Jew as a cheat is a stereotype though here Jacob actually is a cheat but that Torah is not endorsing his cheating, that Torah features people with flaws, not perfect people and that, finally, God said he would be with Jacob as he went back to his birthplace, his father’s land, echoing previous promises and also indicating that God stands by even imperfect people.

Our artwork this week is by Los Angeles Jewish painter, Ruth Weisberg (1942- ), excerpts from a mixed media presentation called “Sisters and Brothers” that focuses on the two pairs of Rachel and Leah, and Jacob and Esau, Wellspring (above), and Jacob’s Birthright (below). Rachel and Leah appear to be combining their offerings into one so that they are collaborators or sources of one wellspring, showing the effect of feminism on Weisberg’s thinking. The contemporary attire in the portrayal of Jacob stealing the birthright indicates that Weisberg finds relevance for today in stories from Torah. The light in the monoprints suggests the same, that some divine light pervades our contemporary lives, perhaps the same light that pervaded the lives of those in Torah. 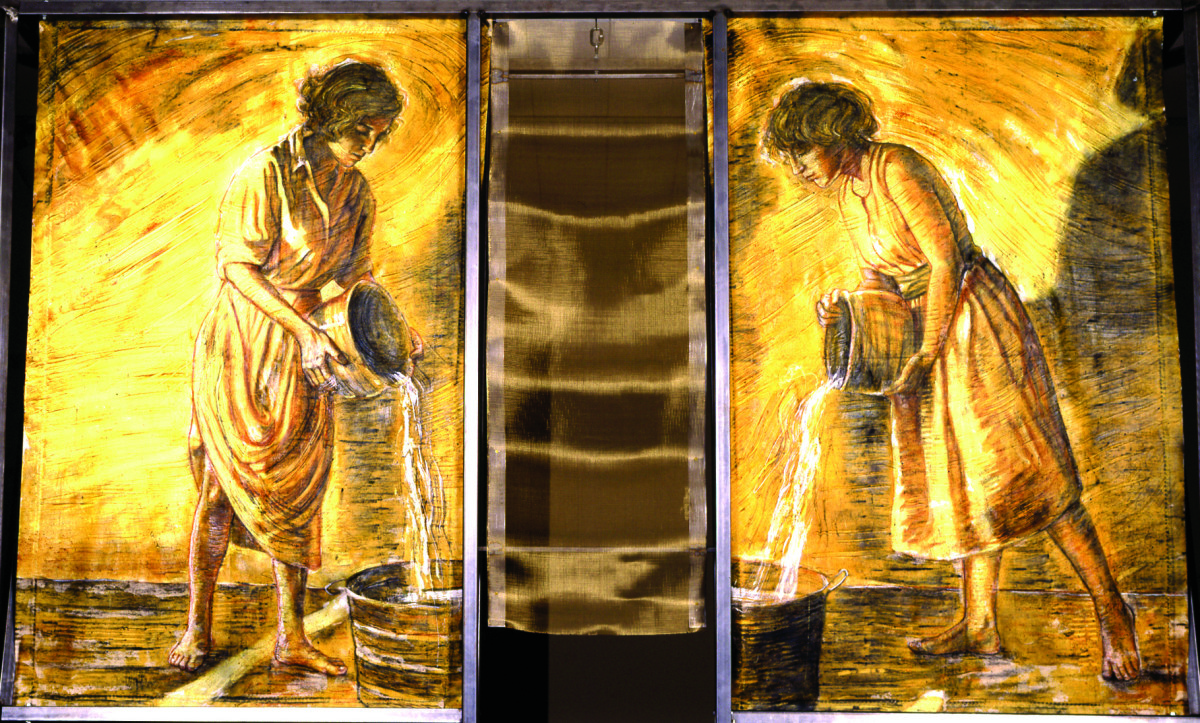 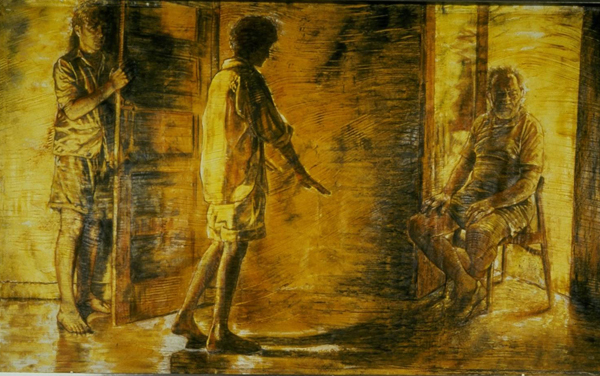