Last week we discussed Shechem cleaving to and loving Dinah and wondered what that meant (was he attracted to her? In love with her? desirous of a connection with her—or with her people?). We discussed the fact that Dinah is here described not as Leah’s daughter but as Jacob’s daughter (because she is now seen more as an object than a subject?) and that more literally it was Shechem’s soul that cleaved to and loved Dinah. We discussed Shechem speaking tenderly to Dinah (or, more literally, speaking on her heart) and wondered if that meant he had tender feelings for her or that he was working hard to persuade her. We discussed Shechem telling his father to get him “this girl for a wife,” that the phrase again makes Dinah object not subject especially with her described as a girl.

We discussed Jacob hearing that Shechem had defiled Dinah (or made her impure) and keeping quiet about it until his sons came back from being with the cattle. We wondered what in their view (the view of Jacob and whoever told him Shechem had made her impure) the impurity was: was it rape? was it sex out of marriage? was it sex with a foreigner? was it sex with an uncircumcised man? We wondered why Jacob kept quiet until his sons came home.

Then we discussed Shechem’s father, Hamor, going to speak to Jacob and whether Hamor knew that Jacob had heard about what had gone on between Shechem and Dinah or not and we discussed Jacob’s sons coming home and being pained and very furious about it. We wondered what about it infuriated them. The text says they were furious because Shechem had done a foolhardy thing among Israel and we wondered how it could refer to Israel since there was no “people of Israel” yet for the thing to be among (only a person named Israel) and thought about it being written after the fact. We also noted the emphasis on what happened to or among Israel meaning that the issue was not how the event affected Dinah but how it affected her people (noting sexist overtones). We noted the text’s narrator (whoever the narrator might be) saying about the foolhardy event “such a thing is not done” and that it is striking that the narrator interjects—and interjects such a strong comment.

We discussed Hamor speaking with them and exhorting them to give Dinah to Shechem as a wife since his soul longed for her. We wondered if he asked that knowing that his son had had sex with her or not and also whether he asked it knowing that Jacob was aware they had had sex or not noting that our evaluation of what he was asking would be different in each case. We discussed him saying to give Dinah to Shechem as a wife and, more generally, to marry with them, specifically, to give your daughters to marry with us and take our daughters to marry with you—and also to live with us and live and go around in our land and take possession of it. We noted the generosity of this idea. We discussed Shechem then interjecting that they should let him find favor in their eyes and he would give them whatever they asked for from him. We discussed the idea that Shechem was being more strategic to get what he wanted or, alternately, that he, too, was being generous.

We also discussed why in the world this story appears in Torah. Is it to show that Jacob’s people were offered a multicultural, mixed life but did not take it because they wanted to retain their purity? Is it to justify the conflict they had with the others by positing that a crime had been perpetrated against them? Was it to explain an historical fact of some kind?

Our artwork this week is by contemporary Pittsburgh-based Jewish artist, Irene Winn-Lederer, Simeon and Levi (above), and Dinah (below). A Chicago native, Winn-Lederer studied at the Chicago Art Institute and the Chicago Academy of Fine Arts. During the pandemic, she says, “I’ve often felt like a flightless bird whose wish to fly motivates its dreams” and inspired a series of drawings called “If Wishes Were Wings” that features drawings of imaginary flightless birds. 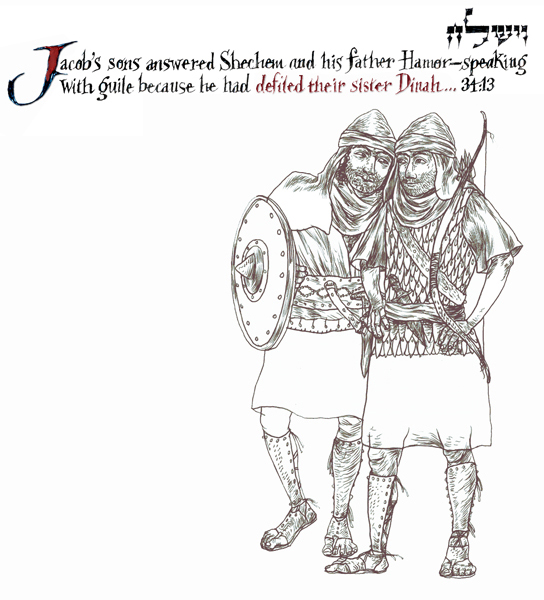 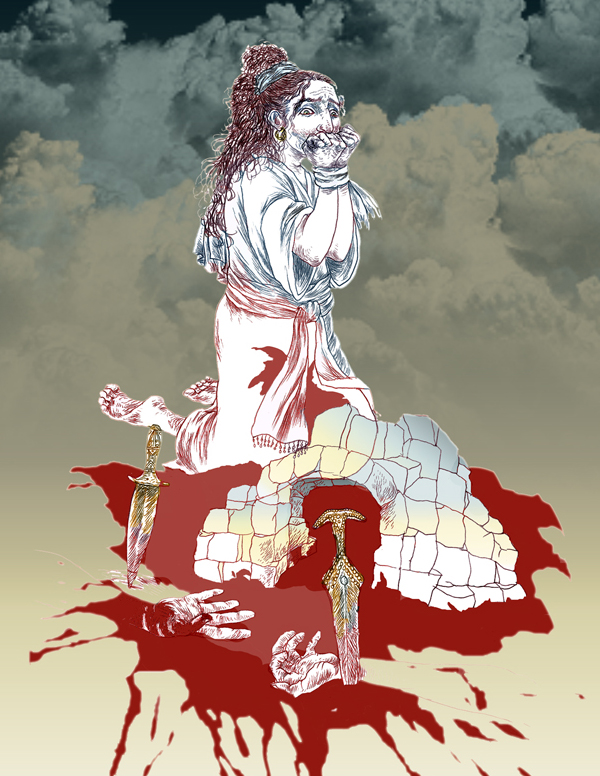 « Reconciliation and Degradation » Guile and Slaughter