Tamar and her Husbands

At the last session we discussed Judah getting a wife, Tamar, for Er, Judah’s first-born, and then YHVH killing Er. We wondered about YHVH and the killing or almost killing of sons, such as Er and Isaac. Er, the text says, was bad in YHVH’s eyes and YHVH killed him. But, how was he bad? The text does not say.

We discussed the Levirate marriage of Er’s brother, Onan, to Tamar (the brother-in-law marries the sister-in-law in order for her to have a child in the family line that can be understood to be her dead husband’s son; “levirate” comes from the Latin “levir” which means ‘brother-in-law) and that it appears to have been a custom in the region. Onan was asked to marry Tamar and “raise seed for your brother.” We discussed Onan knowing that the seed would not be his and not wanting to give seed for his brother. We discussed that he, instead, spent it on the ground so that Tamar would not get pregnant and that his doing so was bad enough in YHVH’s eyes that he killed Onan, too. We noted some commentators think Er must have done the same wrong thing, spending the seed on the ground, perhaps because he wanted Tamar to remain beautiful. We did not find the arguments for this understanding of Er’s wrong-doing persuasive.

We discussed Judah telling his daughter-in-law, Tamar, to go live in her father’s house until his third-born, Shelah, should grow up, insinuating that she would marry him. We discussed that Judah’s real intention was to get her out of the way and not to have her marry Shelah (given that her first two husbands had died so that she was, in contemporary terms, a “black widow”) and noted the text saying Judah was concerned that Shelah, too, would die, like his two brothers). We discussed Tamar going to live at her father’s house.

Our artwork this week is by New York Jewish artist and Jewish art essayist, Richard Mc Bee, Judah and Tamar (above) and Judah Acknowledges Tamar (below). McBee studied at the Art Students League in New York City. He was a founding member of the Guild of Jewish Art and a co-founder of Jewish Art Salon. His website, Richard McBee, Artist and Writer, includes his art, essays on Jewish art, and many examples of contemporary Jewish art. 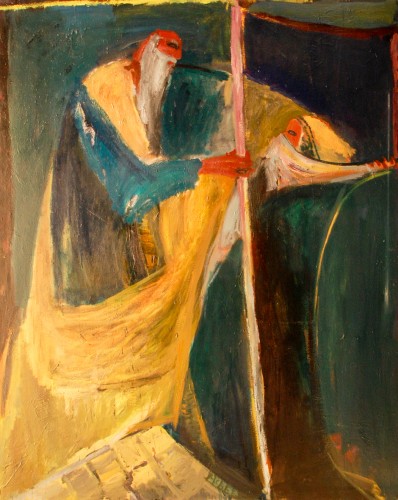 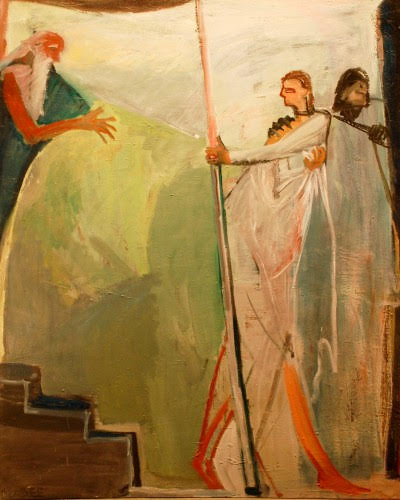 « Judah Moves On » Tamar and Judah