Last week, we discussed previous famines in Genesis, the famine that led Abram and Sarai to go to Egypt (Genesis 12:10) and the famine that led Isaac to go to the Philistine city of Gerar (Genesis 26:1), and noted that famine is a main source of movement in Genesis. We noted Joseph telling Pharaoh to deposit the food from the abundant years so that, during the seven years of famine, the land would not be cut off (and speculated about the meaning of “cut off”) and that, what Joseph talked about in his dream interpretation, was good in the eyes of Pharaoh and the servants.

We discussed Pharaoh’s rhetorical question, will we find a man such as Joseph with gods’ (or is it God’s) spirit (ruach elohim) in him, where what makes the question rhetorical is the assumption that they will not, and that once again what god (or gods) are referred to is left unspecified making communication between these Egyptians and an Israelite about the divine possible. We discussed Pharaoh saying god/gods made Joseph know so much and that no one is as understanding and wise as Joseph so that Joseph would be over Pharaoh’s house and at the kiss of Joseph’s mouth all Pharaoh’s people would conform (wondering, along with commentators, about the meaning of “kiss” in the passage). We noted Pharaoh saying to Joseph that Pharaoh would be greater than Joseph only in the throne. We remarked on the similarity of Pharaoh giving Joseph so much power to Potiphar previously turning everything over to Joseph.

We noted Pharaoh marking a transition of status in Joseph by 1. putting his signet ring on Joseph’s hand, having him dressed in linen garments and setting a gold chain on his neck (the gold chain being another way in which Joseph was becoming Egyptianized), 2. having his second in command drive Joseph around in a chariot while people shouted “Abrek” (meaning “Kneel”? “Make way”?), 3. putting Joseph over all the land of Egypt and telling him, in a figure of speech indicating Joseph’s new power, that no one would raise a hand or foot in Egypt without Joseph, 4. giving Joseph an Egyptian name, Zaphenath-paneah (meaning uncertain though it may include reference to life) and 5. giving Joseph an Egyptian wife, Asenath, daughter of Potiphera, the priest of On.

We discussed On being Heliopolis, the city of the sun god who was identified with Ra and Atum. We discussed the elevation in status indicated by Joseph marrying the daughter of the top priest. We discussed the recent theory that the story of Joseph is based on an actual proto-Israelite named Baya from Yahwa (a city, near Seir, whose god was Yahweh) who became the vizier of the child-Pharaoh, Siptah, during a Mediterranean famine during the Bronze Age. We actually discussed a lot more than this, if you can believe it.

Our artwork this week is more by Russian-French Jewish artist, Marc Chagall, Joseph Recognized by His Brothers, above (gouache and oil on paper), and Joseph and His Brothers, below (etching with hand-applied watercolor, from his Bible series). Regarding Chagall’s series of Bible etchings, Meyer Schapiro says, “The work is wholly free of self-conscious striving; what is beautiful in it does not spring from a will to novel forms” and “In almost every image we experience the precise note of his emotion, his awe or sadness or joy.” 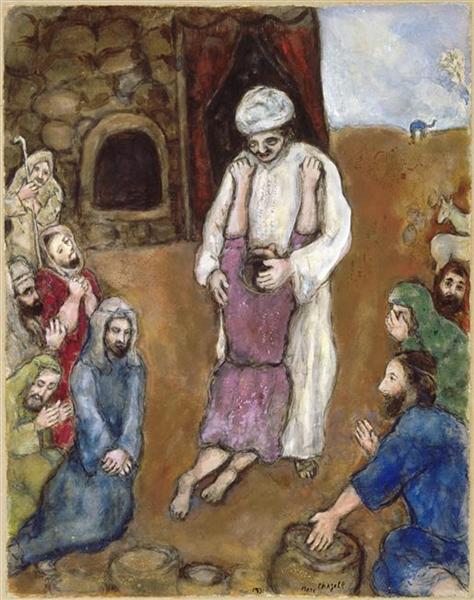 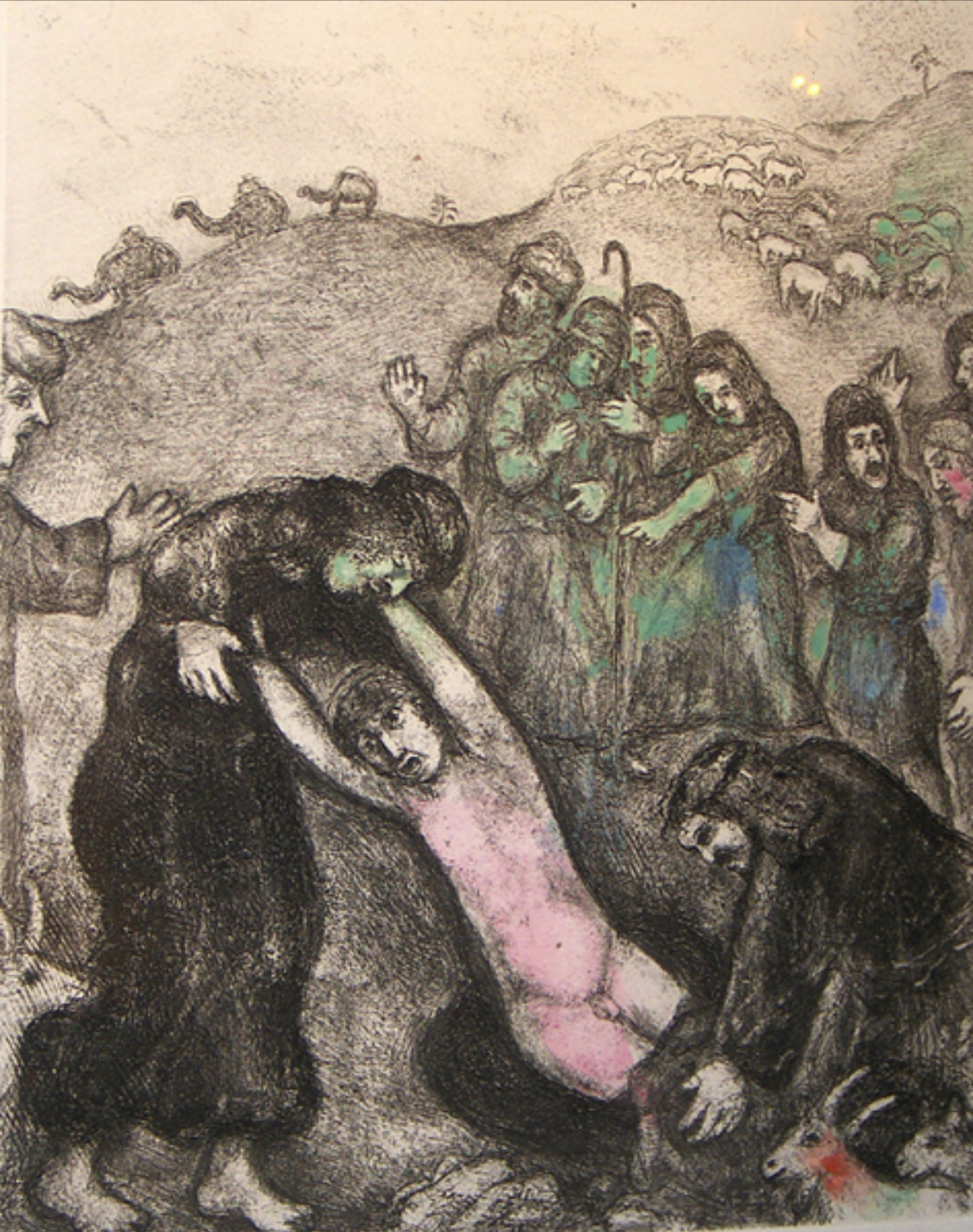 Joseph and His Brothers (Marc Chagall)