In the last session, we wondered about Joseph selecting only five of his brothers to present to Pharaoh and thought he might have selected some that would guarantee that Pharaoh would not want them in Egypt but in Goshen and noted in that regard that when Pharaoh asks them what they do, they say they are shepherds, have come because there is no pasture for their flock in Canaan due to the drought, and they hope to sojourn in Goshen. The Egyptians were not keen on shepherds, perhaps because they loll around and don’t really do anything, and so would be happy for them to be somewhere else. Another sign of the distaste for shepherds, we noted, is Pharaoh telling Joseph, if any of the brothers are men of ability or valor, that Joseph should put them over the cattle, indicating a preference for cattlemen over shepherds. We also noted the use of the term ‘men of valor’ related to the more familiar ‘women of valor’.

We discussed Joseph presenting his father, Jacob, to Pharaoh and Jacob blessing Pharaoh (not just greeting him but blessing him though a blessing of course is a greeting), Pharaoh asking him how old he is (as is not uncommon with people who meet the very old, such as Obama meeting an old person and admiring their age), Jacob saying he is 130 years old but complaining about it: not as old as his forebearers and that he had had a difficult or hard life.

We noted Joseph settling his father and brothers in the choice land of Rameses (following Pharaoh telling them to select a choice land) and discussed the quite varying interpretations of the fact that Rameses is not Goshen (with R. Sara mentioning that Rameses is the Springfield of Egypt, i.e. a commonplace name found everywhere). We noted Joseph collecting money from the whole world around them when famine left people without produce from the land and then taking their cattle when the money he gave them ran out. We discussed the “we take care of our own” ethos with no particular conclusion but with the idea that it is different than a benevolence ethos.

We noted that sustaining his father and brothers down to the little ones is probably a merism, a figure of speech in which two contrasting parts are used to stand for the whole, and R. Sara mentioned the analogy a baby is to bread as a house is to money (baby:bread::house:money).

As we enter the new year, I wanted to mention that, when I say “we thought” or “we wondered,” I am often referring to our rabbis. It would be hard for me to remember both what we talked about each week and also who said what but I feel guilty sometimes saying “we” and not giving credit where credit is due. As in many book dedications, then, I would say, all the best comments come from our rabbis, and feel free to attribute any mistakes elsewhere.

Our artwork this week is more by German-Israeli Jewish painter, Michael Falk (1929- ), Jacob Blessing Ephraim and Menashe (above), and Jacob’s Descent to Egypt (below). When Falk retired from farming on a moshav in Israel, he shifted entirely to painting. He has created many paintings of Torah stories and others of life in Germany and Israel. If you wish to follow him, here is his Facebook page. 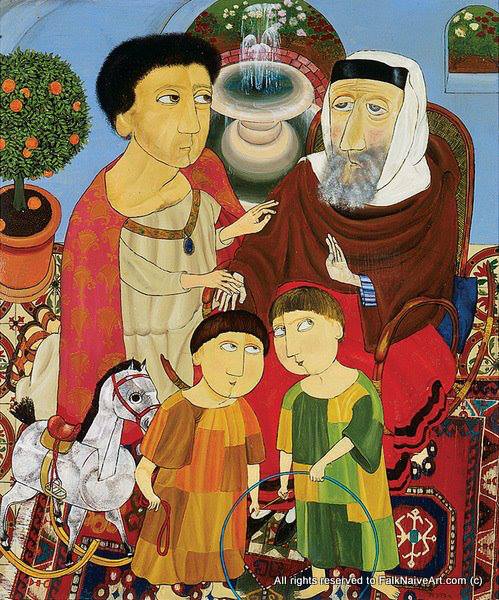 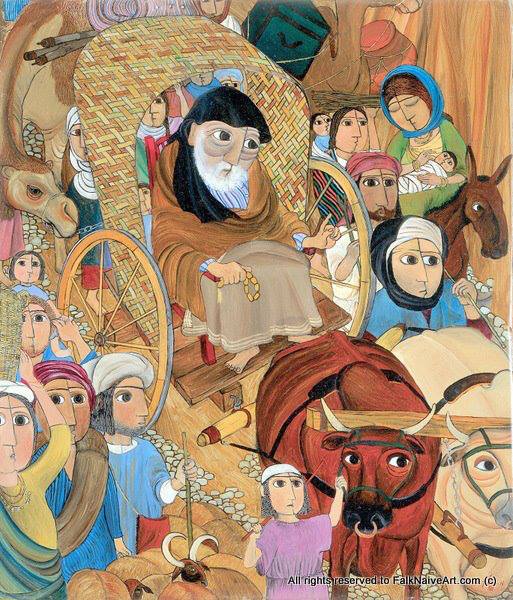