Last week we discussed Jacob, in his hundred forty-seventh year (his seventeenth and final year in Egypt), telling Joseph to put his hand under Jacob’s thigh and practice kindness and faithfulness by not burying him in Egypt (and the similar passage in Genesis 24:2 in which Abraham tells his servant to put his hand under his thigh and swear he will not get a wife for Isaac from the Canaanites but from the people at his birthplace). We discussed the idea that Jacob was fulfilling his covenant with God by going back to the promised land rather than staying in Egypt. We noted Jacob saying that Joseph would carry Jacob out of Egypt to lie with his fathers.

We noted the fairly strong argument that “lying down with” means dying rather than being buried (due to passages in which one is distinguished from the other) and we discussed the idea that “under the thigh” probably means touching his genitals and wondered if this was a typical practice in the region. We noted Joseph agreeing and Jacob asking him to swear to it which he then did, followed by Jacob/Israel bowing at the head of the bed. We discussed various ideas about what his bowing means (for example, gratitude).

We discussed someone (and we wondered who) telling Joseph that Jacob was sick, Joseph taking Ephraim and Menassah and going to Jacob, and Jacob fortifying himself and sitting up in the bed when he was told that Jacob was coming.

Along the way, we discussed whether any people are actually evil (as distinguished from simply doing evil deeds or from simply being thoughtless or impulsive) and noted that we would be interested in hearing more about this from Rabbi Ben in the future.

Our artwork this week is two paintings by Tel Aviv Jewish artist, Israela Lev, Blessing of Jacob to Joseph (above), and Simchat Torah (below). The blessing painting portrays Jacob, dressed in blue and wearing a kippa, seated in a throne-like chair with his hands above Joseph, dressed in red with an Egyptian head covering, kneeling on the ground with his hands reaching out toward Jacob’s feet, and Ephraim and Menassah behind the chair, dressed similarly to their father. By emphasizing the difference in clothing, Lev, who is transgender, brings out the fact that Jacob is bringing the Egyptianized Joseph and his Egyptianized children within the covenant. The painting’s Hebrew text is the same text we began with last week, Genesis 47:28, the first verse of Parashat Veyechi. 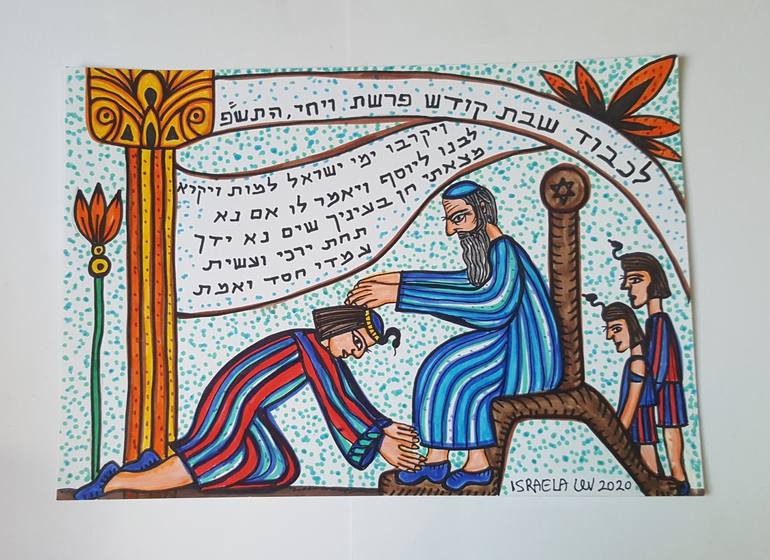 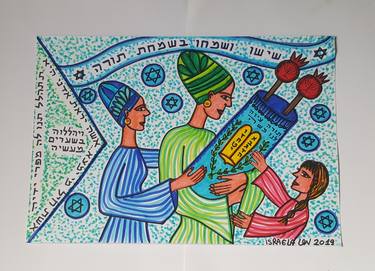