Last week we discussed Jacob blessing Joseph and wondered why it does not seem that he blesses Joseph but only blesses Joseph’s sons, Ephraim and Menassah (could this show that this event just is not about Joseph? or could there be a textual issue since a number of texts read “them” rather than “Joseph”?). We noted Jacob recalling his fathers, Abraham and Isaac, thus connecting himself to the covenant, and referring to God as a shepherd, thus reasserting his line’s connection to shepherding and Canaan and not to Egypt. We saw him continue those connections in blessing the youths and saying that in them his name, and those of Abraham and Isaac, would be remembered and that the youths would be multitudes. We noted as well that Jacob calling on the messenger who kept him from harm to bless the youths recalls the messenger at Exodus 23:20 who also was a protector and we discussed the two possible translations, ‘messenger’ or ‘angel’.

We discussed Jacob disregarding birth order again (as he disregarded his own birth order in relation to Esau) and blessing Ephraim before Menassah, Joseph pointing this out to Jacob and Jacob saying that he very well knew it (which we thought meant Jacob was switching the order intentionally). We noted Jacob saying both would be great but one greater than the other and with many offspring. We discussed Jacob saying that “by you” (by Ephraim and Menassah) would Israel make blessings and the fact that to this day sons are blessed each week by “May you be like Ephraim and Menassah” (and girls by “May you be like Sarah, Rebecca, Rachel and Leah”). We noted Jacob saying that he is dying but God would be with them and take them back to the land of their ancestors; reiterating that Joseph would get two portions, one more than each of his brothers; and Jacob praising himself by saying that he got the portions through sword and bow.

In sum, we noticed how, in blessing, Jacob connects the present and future to the past and, in addition, their current place to the past land of their fathers and their present relationship with the Egyptians to their original relationship with their fathers. Though the assimilated can have the blessing (for example, Ephraim and Menassah who were raised like Egyptians), the blessing ties all of them into the original covenant and its implications.

Our artwork this week is two color lithograph maquettes that Russian-French Jewish artist, Marc Chagall (1887-1985) made for his Jerusalem Windows, The Tribe of Zebulun (above) and The Tribe of Issachar (below). The ship is the symbol of Zebulun (“who will dwell by seashores: and he’ll be a shore for boats,” Gen. 49:13) and Issachar is represented by an ass (“Issachar is a strong ass,” Gen. 49:14). The rich greens of the latter suggest the land Issachar would have (“he saw…the land, that it was pleasant,” Gen. 49:15) and a prosperous village is sketched in the background. The triangle contains the first part of Jacob’s blessing of Issachar and the hands in front of the triangle are making a gesture of blessing.

About working on the windows, Chagall said, “All the time I was working, I felt my mother and father looking over my shoulder; and behind them were Jews, millions of other vanished Jews, of yesterday and a thousand years ago.” 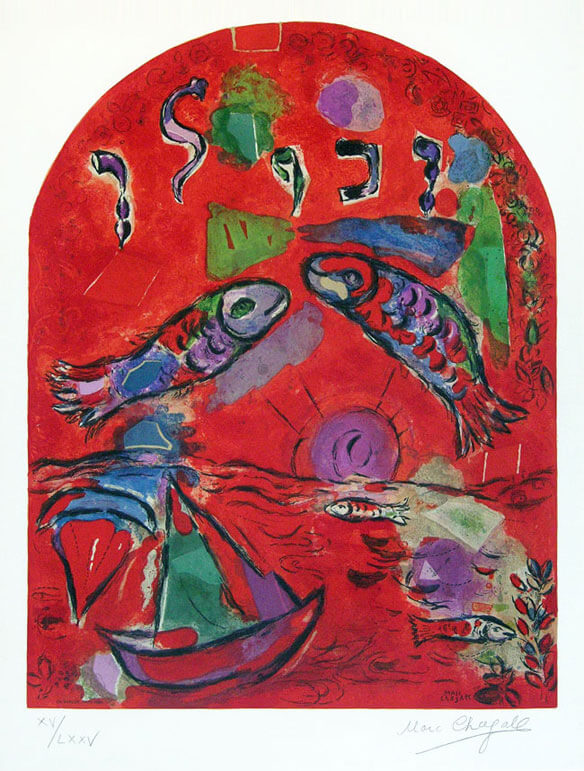 The Tribe of Zebulun (Marc Chagall) 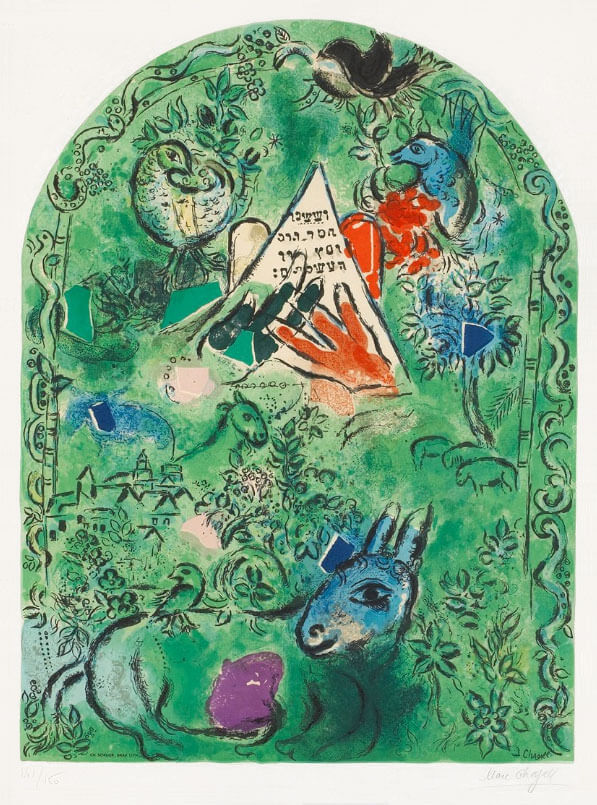 The Tribe of Issachar (Marc Chagall)